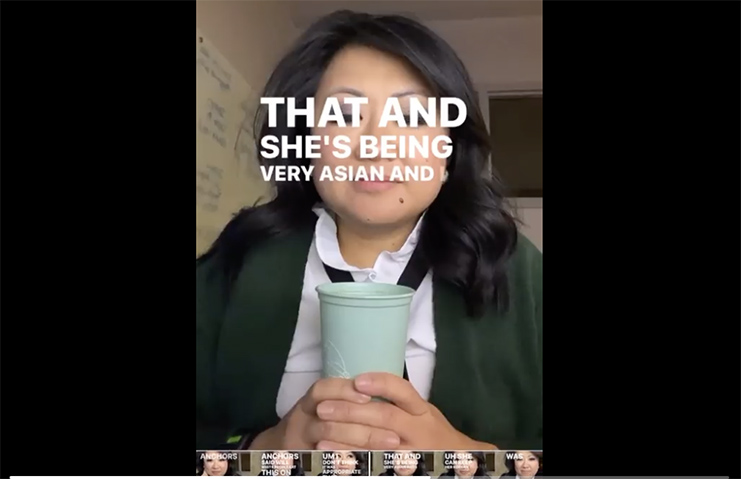 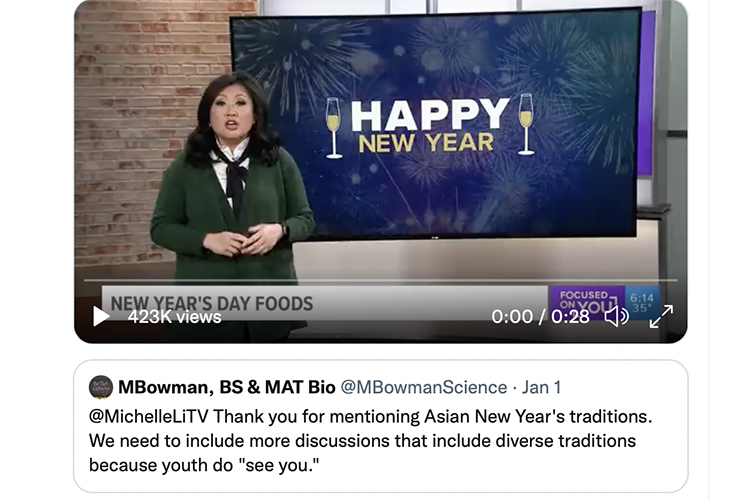 Unity took a #VeryAsian turn earlier this month when an Asian American TV news anchor turned a viewer’s comment she called “ugly and racist” into something quite beautiful and amazing.

On New Year’s Day, KSDK-TV’s Michelle Li posted a video of herself listening to a voicemail from an unidentified woman who had watched a news segment on traditional New Year’s Day dinners. In that segment, Li, who is of Korean descent, made the comment that she “ate dumpling soup. That’s what a lot of Korean people do.”

In the voicemail, the viewer left a message complaining about the news segment saying in part, “I kind of take offense to that because, what if one of your white anchors said, ‘Well, White people eat this on New Year’s Day.’ I don’t think it was very appropriate that she said that, and she was being very Asian.”  The viewer went on to say, “She can keep her Korean to herself. All right, sorry. It was annoying.”

After Li posted the video of her listening to the voicemail with the caption, “I’d love to say something back,” a tidal wave of Asian Americans across the country responded that they also have something to say. The outpouring of comments in support of Li opened up conversations about race and cultural representations. They came from everyone from fellow journalists to Hollywood celebrities and prominent politicians.

In a tweet posted January 5, U.S. Senator Tammy Duckworth, who is of Thai descent, shared a video of her eating a traditional Thai candy while saying she’s being Very Asian. She went on to say in Thai, “Sawat Dee Pee Mai Took Khon,” which means “Happy New Year everyone.”

Newly elected Boston Mayor Michelle Wu retweeted Li’s post and wrote: “We had dumplings for New Year’s too! Proud to be #VeryAsian.”

Actor Ken Jeong, who was born in Michigan to South Korean Immigrant parents, tweeted “Proud to be #VeryAsian with @MichelleLiTV; and a California based music producer named Issac Lee tweeted, “If they’re mad that we eat dumpling soup on New Year’s, wait until they hear that we celebrate two New Year’s #VeryAsian.”

Many others shared pictures of themselves eating or cooking up dumplings. Even Li herself posted a picture of what she called a “#Verysian recipe I’ve had for 20+ years from a sweet Korean ajummah named Agatha.” It’s a recipe for potstickers (mandu) that Li said she made some adjustments to over the years. She later posted a Facebook Live video of her making the potstickers while chatting with her followers.

Li has been in the television news business for nearly two decades. In an on-air commentary on KSDK-TV, which is located in St. Louis, Missouri, Li shared her initial reaction to the viewer’s comment saying, “I am not going to lie. It hurt, and I cried. I posted her voicemail, and I went to bed feeling down. That night my husband gave me a really big, long hug because he knows that 42 years in this body has absorbed 42 years of racism, discrimination and at times, actual violence, and to think some people lose their lives simply because a racist is annoyed that they exist.”

In that commentary, Li also shared with the viewers how she was adopted by white parents from Korea as a baby and that she grew up in Missouri. She also extended an invitation to the viewer who made the call to have a real conversation with her about humanity and kindness. “It is time to let go of old thinking and celebrate who we really are,” she said.

In an on-air statement, Li’s employer said it fully supports her, saying, “At KSDK-TV, we embrace diversity in the people we hire, the stories we tell, and our local community.”

Li and fellow Asian American Journalist Gia Vang have launched a website, www.veryasian.us,  where people can purchase #VeryAsian themed t-shirts, sweatshirts, hats and other merchandise. Proceeds will benefit the Asian American Journalist Association (AAJA). The organization advocates for Asian American and Pacific Islander journalists, and works to advance diversity and inclusion in newsrooms. To donate directly to AAJA, go to www.aaja.org.