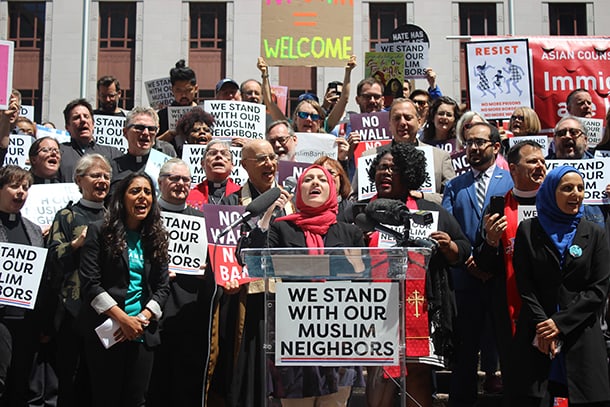 Forty years ago, Roxana Norouzi’s parents came to the U.S. from Iran on student visas to fulfill their dreams of getting an education in the U.S. When the Iranian revolution disrupted things back home, it wasn’t safe to return, and soon, it was too dangerous for members of their family to stay. Several of Norouzi’s cousins, aunts and uncles were granted political asylum and settled in the U.S. as refugees.

“I’ve always known this nation to be one that embraces the contributions of my family,” said Norouzi, who is deputy director of the immigrant and refugee advocacy organization One America. But today, Norouzi said before a rally in downtown Seattle, “The story of my family would not be possible.”

Today the U.S. Supreme Court voted to uphold Trump’s ban on travellers from seven mostly Muslim majority countries, including Iran. At midday, around 200 people gathered by the steps of the William Kenzo Nakamura United States Courthouse downtown to show support for the Muslim community.

“In time, this ruling will be viewed as an embarrassment and stain on our nation,” Norouzi said.

Since the Muslim ban was first introduced in January, 2017, it’s been struck down three times by lower courts. But today the Supreme Court’s conservative majority voted 5 to 4 to uphold the ban, which prevents certain travelers from Syria, Libya, Iran, Yemen, Somalia, North Korea and some government officials from Venezuela from entering the U.S.

Jasmin Samy, civil rights director for the Washington Council on American Islamic Relations (CAIR WA), said the ban will have immediate impacts on the local Muslim community. “It’s going to separate families, it’s going to separate children from their parents and a lot of people won’t be able to get medical assistance,” she said.

But the ruling will have broader impacts, too. “On the other side also, which people don’t see much, is the negative impact that it has on us as American Muslims living in the U.S. feeling that we’re not welcome, that there’s so much negative rhetoric around the Muslims,” she said.

According to Aneelah Afzali, executive director of the Muslim Association of Puget Sound’s American Muslim Empowerment Network (MAPS AMEN), the ruling is not only an attack on Muslims and immigrants, but, “it’s an attack on all of us.”

Varisha Khan, communications coordinator for CAIR WA, said the ruling is “yet another Supreme Court decision that adds to our shameful history of legalized hate.”

In her dissent, Supreme Court Justice Sonia Sotomayor compared the Muslim travel ban to the case of Fred Korematsu, a 23-year -old American citizen of Japanese ancestry who refused to comply with President Roosevelt’s order for Japanese Americans to be incarcerated in concentration camps. When Korematsu’s case made it to the Supreme Court in 1944, the court sided with the government, saying it was legal to detain and incarcerate around 120,000 Japanese and Japanese Americans.

The Korematsu ruling has been judged as a low point in American jurisprudence ever since. As University of Michigan law professor Richard Primus told the Washington Post today, “there came to be a consensus that the decision in Korematsu was a stain on the Supreme Court.”

In both the Korematsu case and the Muslim ban, Sotomayor wrote in her dissent, “there was strong evidence that impermissible hostility and animus motivated the Government’s policy.”

Today the Supreme Court officially overturned the Korematsu case at the same time as it upheld the travel ban.

Tom Ikeda, executive director of Densho — which documents World War II Japanese American incarceration history — told the rally that before the decision was announced, he had hoped the court would rule against the travel ban because the cases were so similar.

Ikeda saw irony in Justice Roberts upholding the travel ban while arguing that the Korematsu decision was was a mistake. During World War II, as today, the U.S. government used national security as a justification for incarcerating Japanese and Japanese Americans. “They constructed this thinly-veiled argument that Japanese were dangerous because they might be saboteurs, they might be spies,” Ikeda said. “They couldn’t say ‘We’re gonna put Japanese [in camps] because of their race.’ They had to have another reason. That’s what’s happening, too, today. What Trump has been saying all along, he doesn’t like Muslims, he doesn’t want them to come in.”

Ikeda added: “We knew back in World War II that it was a racist argument. Today it’s religious bigotry.”

The rally had a final, unplanned speaker. Tessa Watanabe was passing through downtown on an errand when she saw the rally. A fourth generation Japanese American and Muslim woman, Watanabe’s grandmother was incarcerated at Camp Minidoka, and her grandfather served in the all-Japanese American 442nd Regimental Combat Team.

Watanabe spoke about friends at the mosque who have family members they now won’t be able to see before they die, or children they’ll be separated from. “They are now barred from bringing their parents, their children, their cousins, their relatives to safety,” she said. The government “has not learned the lesson of my grandmother, the lesson of my grandfather,” she said. “They were imprisoned, everything was stripped from them, and they still didn’t recover.”

As Watanabe pointed out, the rally was assembled on the steps of a courthouse named after William Kenzo Nakamura, who was also incarcerated at Minidoka. Nakamura also served in the 442nd. He was killed in the combat, but awarded a Medal of Honor — the highest military award — after his death.