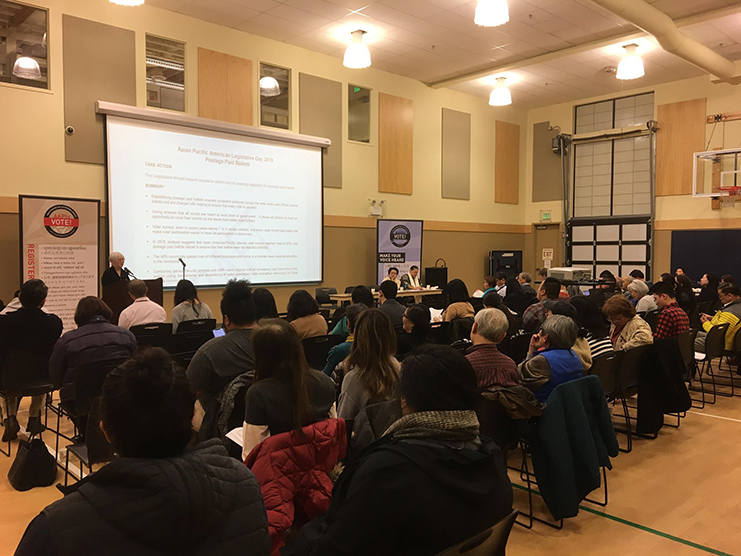 On the evening of January 14, more than 50 community members and leaders congregated in the gym at the Asian Counseling Referral Service (ACRS) to learn about this year’s legislative agenda, all of which address issues that directly impact the local API community. The briefing came ahead of the 2019 Asian Pacific American Legislative Day in Olympia, held on January 23, organized and presented by the Asian Pacific Islander Coalition of Washington State (APIC.)

“We organized our first statewide legislative day in 1996,” said Narasaki. “That year, we made history, bringing 3,000 people together around the state to mobilize toward legislation that our community still relies on today.”

“Whenever we organize our legislative day, we brainstorm the issues that are most important to our community,” she continued. “Not all issues, but some that we feel disproportionately impact our community. Tonight, we are going to go over this year’s priorities to check in with you on whether you think it’s an appropriate legislative agenda.”

The agenda includes proposed legislation about anti-immigrant policies, the protection of undocumented communities, environmental justice, voting access, tax reform, and funding for accessible and affordable healthcare in the API community.

The first item discussed was APIC’s support of Governor Inslee’s proposal to increase funding for Washington state’s naturalization service, which aids immigrants and refugees in receiving citizenship status, thus qualifying for federal benefits such as food stamps, SSI, and Medicaid. According to the City of Seattle, the program is also one of the most cost-effective programs funded by the state.

Governor Inslee also made a proposal to increase Limited English Proficient (LEP) Pathway funding, a program that assists refugees and immigrants by providing job training and resources, ESL programing, and social services. The program’s budget was slashed in half in 2011. This action item urges the Legislature to restore LEP’s funding.

The next agenda items requested that the Legislature ensure dental coverage to elderly or disabled immigrants, many of whom are ineligible for Medicaid because of their citizenship status, as well as residents from Pacific Islands nations included under the Compact of Free Association (COFA). Jon Gould, Deputy Director at the Children’s Alliance, added that the HB 1291/SB 5683 bill, introduced last March, only provides medical coverage to income-eligible individuals. It does not include dental coverage.

Next, Enoka Herat from the American Civil Liberties Union in Washington advocated for the Keep Washington Working Act, which prohibits the police force from collaborating with the U.S. Immigration and Customs Enforcement (ICE) agency. “ICE comes to sensitive locations and this bill would limit their ability to arrest vulnerable individuals. When local police are viewed as an extension of ICE, people are less likely to call them, therefore making the community less safe,” Herat said.

The last item to address immigrant and refugee rights was a request for the Legislature to allocate $2.5 million annually to the Legal Defense Fund. Immigrants in need of legal support are not guaranteed access to an attorney and are often forced to go to immigration court without legal representation because of their inability to pay for it. Having an attorney can dramatically increase the chance that an undocumented individual will be able to remain in the country.

Community leader Akemi Matsumoto spoke next, pushing the legislature to reestablish support for underserved groups in public employment, education, and contracting. She also advocated for the repeal of Initiative 200, a law that voters approved in 1998 which made the use of race in college admissions illegal. “Affirmative action is race conscious, not race-discriminatory. The Reagan administration perpetuated the idea that it creates quotas and discriminates against white people,” said Matsumoto. “We have those myths alive in our communities. It will take a lot of education.”

The other education-related proposal stated that legislation should be passed to establish statewide ethnic studies curriculum for grades 7-12 and to develop an advisory committee to do so. Joseph Lachman, civic engagement program manager at ACRS, emphasized that ethnic studies classes do not only benefit communities of color. Lachman said it’s important that all students learn about injustice and histories that are not Euro-centric. “This bill would be important at any time, but especially now,” added Narasaki. “With white nationalism on the rise, this bill will create avenues and be an important counter-weight toward a collective understanding of our multiracial nation.”

According to the briefing summary provided at the start of the meeting, voter turnout, even in record years, leaves 1 in 4 voices unheard. This item asks that legislation is passed for postage paid ballots. Making democracy and civic engagement accessible requires cultural competency and education. Last year, API voter turnout reached close to 60% and postage paid ballots helped to ensure their ballots were counted.

The one and only environmental item asked the Legislature to pass the HEAL Act and appropriate sufficient funds to combat environmental racism and health disparity. The act would define environmental justice for state agencies and require them to use health disparity data to inform decisions about enforcement, investments, and policy. It would also improve public participation, including translated services and materials and help to save millions of dollars for the communities that disproportionately suffer from pollution.

The one item pertaining to adoptee rights asks the Legislature to support a state resolution that urges the President of the United States the United States Congress to secure the citizenship of internationally adopted adult individuals. Two bills were introduced to grant citizenship to adult adoptees, but neither was referred out of committee for a Congressional vote. Intercountry adoptee Megan Boone said: “We should be treated like any other U.S. citizen. We should not be separated from our families, deported to a country where we do not know the language or any known family members.”

Alison Cheung, the Communications and Community Engagement Specialist with Fuse Washington, advocated for the Legislature to close the tax break on capital gains and fund, modernize and expand the Working Families Tax Credit (WFTC.) This would raise $500 million annually in new revenue and would greatly reduce racial and economic disparities in the state code. Cheung said: “Washington state has one of the most regressive, upside-down tax codes in the nation. We are in last place, and it really impacts low-income communities of color. We need to disaggregate the data and put cash back into the pockets of those who need it most.”

The 2020 Census was the next item to be addressed. APIC and its partner organization the Washington Census Alliance are requesting that the State allocate $15 million to invest in community-focused infrastructure to strengthen statewide efforts around the Census and to conduct outreach to historically undercounted communities. “The inclusion of a citizenship question causes a lot of fear in our communities,” said Lachman. “This is the first time that the federal government is doing a digital census. We’re concerned about who will be excluded because of the digital literacy divide.”
Capital budget requests

The Wing Luke Museum is asking the Legislature to appropriate $500,000 to its Homestead Home Project for the 2019 fiscal year. This will allow the museum to purchase a piece of property in the Chinatown-International District from its long-time family owners. The museum will use the funding to preserve and activate a historic home with affordable housing and community use.

International Community Health Services (ICHS) is requesting $1.6 million for behavioral health and capital improvements to its full-service clinic in Bellevue. New rooms will be created for mental health, substance use disorder, and opioid use disorder visits. The open area will be developed into a space for group mental health visits and a multipurpose room.

ICHS and Kin On are partnering on a $20 million capital campaign to build a facility to provide care to seniors with integrated healthcare in an environment that allows seniors to “age in place.” Services will include preventative, primary, acute, and long-term care. They’re requesting $2 million to allow them to build the 25,000 square foot comprehensive care facility.

The Filipino Community of Seattle is asking the Legislature to appropriate $1.6 million to build the Innovation Learning Center and Community Gathering Space for residents of the Rainier Valley. The proposed 4,800 square foot project will be located in Filipino Community Village and will house 70 units of housing for low-income seniors.

The Seattle Chinatown International District Preservation & Development Authority is appealing for $16 million to fund the North Lot Project. The project is community development that consists of two structures on the norther-most parcel of the Pacific Medical Center campus. The project will provide 262 units of affordable rental housing, 60% of which will be 2-bedroom or larger to accommodate families.