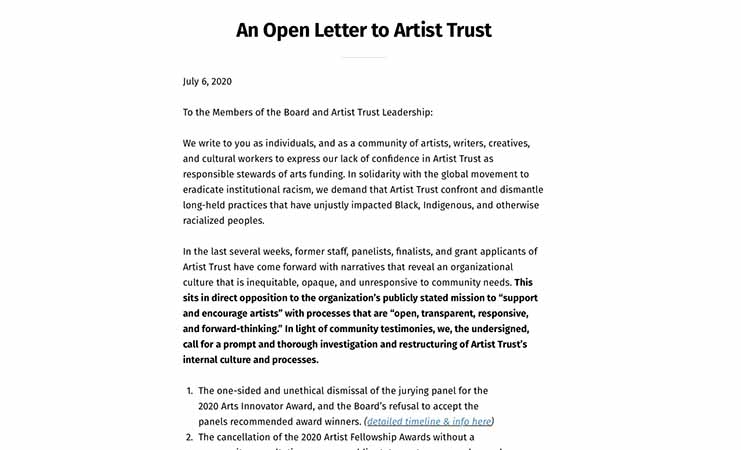 On July 6, 2020, a group of concerned local BIPOC artists published an open letter to Artist Trust, a local arts funding and resource organization originally founded in 1987 by artists and their supporters to provide support for individual artists. At the time of the letter’s initial publication, the letter had about 50 signatories, who claimed in the letter that Artist Trust had been “inequitable, opaque, and unresponsive” to the local artist community.

According to artist and organizer Anida Yoeu Ali, social media posts made by Satpreet Kahlon, Benjamin Hunter and Ali herself expressed concerns about actions by Artist Trust, and respondents to these posts later convened on a conference call. “The letter was initially drafted after narratives and concerns surfaced during our June 26th community call-in where 48 people joined the Zoom meeting,” Ali said. “This letter, led by POC leadership, was written between June 27 and July 3 as the culmination of effort by over 50 community members from across various socioeconomic, generational, racial, and gender lines.”

Kahlon described the process in more detail. “What started off as a conversation around the Arts Innovator Award and Fellowship Award failures of the past year became a conversation that spanned incidents going back several years, with community testimony painting a larger picture of an internal culture of what many perceived as discriminatory against racialized and gendered staff,” she said. “The same former staff that spoke to us about their experiences have also cited speaking to leadership within the organization, one of them going so far as to submit four pages of grievances upon their departure from the organization.”

In particular, the letter criticizes Artist Trust’s handling of the 2020 Arts Innovator Award, the 2020 Artist Fellowship Awards, and the workplace environment inside Artist Trust itself. After publishing the letter publicly to Artist Trust, the writers then circulated the letter more broadly and established an online form to collect additional signatories, of which there were 315 at this writing. “We are now receiving signatures from supporters all over the world,” Ali said.

Artist Trust’s chief executive officer Shannon Roach Halberstadt confirms that Artist Trust’s staff and board have received and read the open letter. “We welcome dialogue with our artist community and are working on a response which we will issue as soon as possible,” she said. “The response is being developed collaboratively with staff, board and artists to ensure all points of view are represented.”

Both the artist-signatories and Artist Trust agree that some groundwork has already been laid. “We have been in conversation with many individuals who are in the arts funding and administrative community privately,” Ali said, “in an effort to also have Artist Trust’s colleagues call them in as much as the larger arts community is calling them out.”

Halberstadt reports that plans for further conversation are already afoot. “Artist Trust has been in discussion with concerned members, and we are planning a virtual town hall to openly discuss these concerns,” she said.

She also expressed gratitude to the letter-writers for initiating this conversation. “We acknowledge our community’s concerns and appreciate that this feedback has revealed opportunities for us to grow,” she said. “Artist Trust is a community first and foremost. Central to that community is a trusting relationship with artists.”

In response to the concerns voiced about the Arts Innovator Award and Artist Fellowship Grants, Halberstadt pointed to the current pandemic. “When COVID-19 hit, we heard from artists who were suffering immediate income loss,” she said. “We learned that 77% of our artists lost income, had no safety net, and needed immediate financial support.”

Halberstadt reports that Artist Trust sought to address this unexpected situation. “To best serve these artists in crisis, we quickly pivoted to focus our efforts on Covid-19 relief, pressing pause on ‘business as usual,’ including our merit-based grant programs,” she said. “More than $620,000 in COVID-19 Artist Trust Relief Funds has reached nearly 400 artists statewide in a few short months.”

Beyond the specific 2020 awards, artists and former Artist Trust staff are seeking an overhaul of the organization itself, and Halberstadt responded that the current staff and board were amenable to this work. “Artist Trust is committed to the important and necessary work to examine our systems and processes to make certain our grant selection process is ethical and equitable,” she said, “and that everyone involved is treated with the dignity, trust, and respect they deserve.”

The artist-signatories appear poised to stand firm on their demands. “The restructuring needs to involve the arts community as important stake-holders and leadership within the staff and board members needs to center BIPOC folks,” Ali said. “Restructuring not only requires a shift in leadership but also the changing of an organization’s by-laws and policies that have allowed for these inequities to take root.”

In advance of a formal response from Artist Trust, Halberstadt stopped short of committing to particular changes or to fulfilling the demands of the letter-writers. “We are grateful for our community’s recommendations for moving forward together,” she said. “Our team is devoted to deepening our commitment to equity in meaningful ways and remains eager to work with our community to make lasting changes for artists in Washington.”