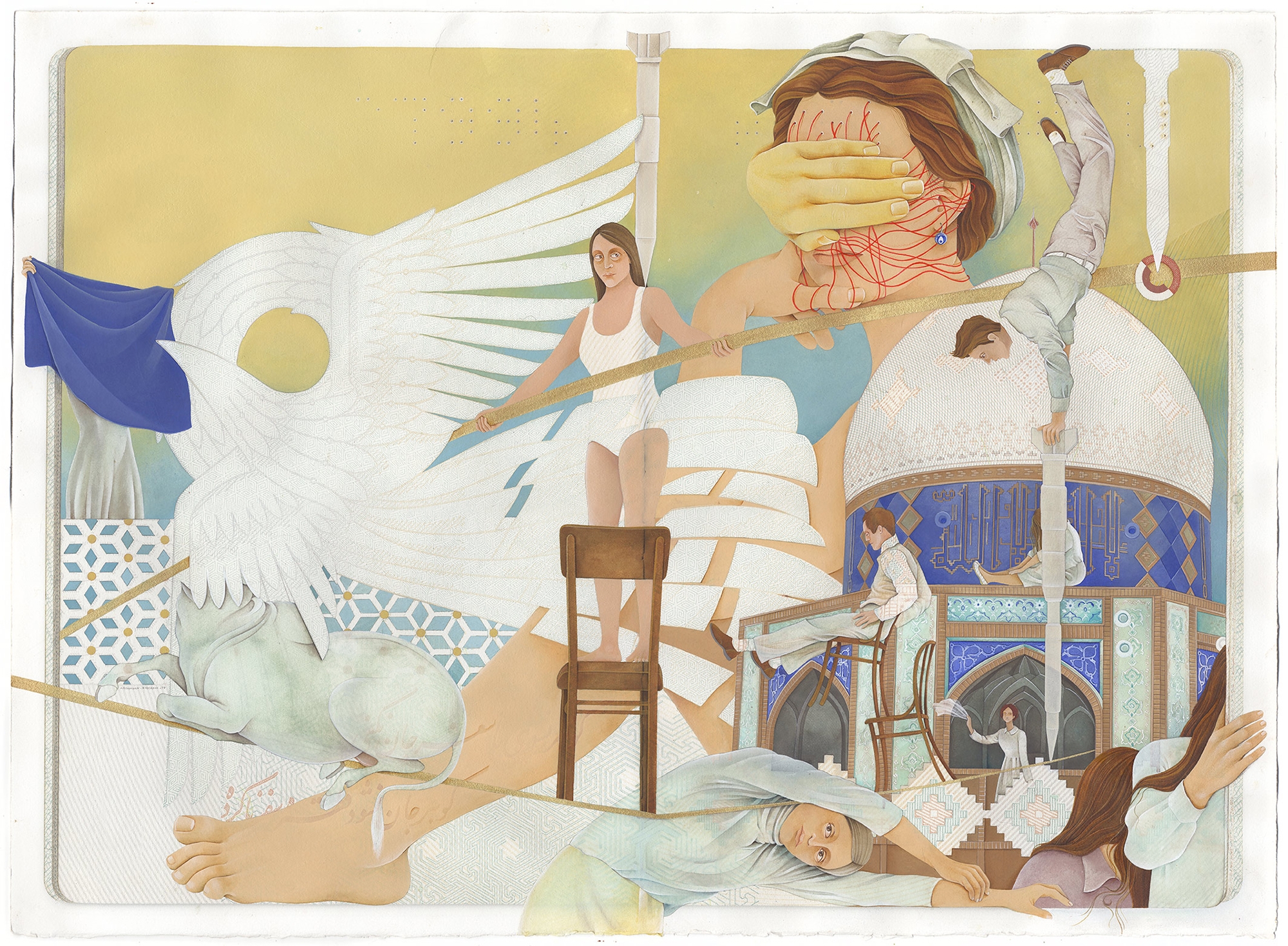 If the art didn’t have price tags, what would happen? This is a thought that popped up in my mind standing amidst over 100 art galleries, including many from abroad, squeezed in the individual temporary square walls of the Seattle Art Fair 2018, held August 2-5. But at the same time, most of us have some special appreciation for the act of creativity, consider it a kind of magical ability to materialize the wonder we search for in our minds. We want to believe that as human beings, we share the same emotion, common sense and intelligence to be able to communicate with others.

By focusing on direct communication with the art, here I can find a more innocent, purer response to the recent political policies which affect the global human flow. Fridman Gallery in New York represents mostly foreign mid-career artists, and brought Arghavdn Khosravi, an artist from Iran, who is completing the graduate program at Rhode Island School of Design.

A series of paintings are entitled, “The Muslim Ban Series”, which she painted when she was deeply disturbed by the ban. They are a composite of images, delicate line drawings of figures and objects pigmented by thin muted acrylic over the inkjet print of patterns of her old passport on paper. The beauty here seems to originate from traditional aesthetics, yet contains the thoughts of a troubled mind with a quiet anger that is real and palpable.

The artists have been those migratory birds who journey in search of opportunities, and after the middle of 20th century, many have come to the United States.

Elizabeth Leach Gallery in Portland introduces Jinie Park who is based in Philadelphia and Seoul. She uses abstract varied shapes of muted acrylic colors on her hand-sewn Korean muslin.

This has a reference to the Korean women’s heritage of bojagi, a patched wrapping cloth. But even more, the smeared colors in “Childhood” and “Land,“ remind me of the palette of Abstract Expressionist painter, Helen Frankenthaler. Filtered through light, and the shapes of different colors together, the work captures the affectionate, direct experience of a personal history.

Jae Ko, represented by Robischon Gallery in Denver, is Korean-born but received her art education in Japan and the United States and now lives in Washington D.C.

She has been working on thick layers of paper to create three-dimensional works and installations. The piles of paper are laid down in waves, squeezed, circled and then dipped in glue, each one in a singular pigment to hold down the forms. One of the colors used for her wall sculptures is a deep cobalt, so blue and bluer than nature that it seems dye the air itself.

A local artist, Etsuko Ichikawa, represented by Winston Wächter Fine Art in Seattle/New York, was born in Tokyo, and resides in Seattle but has exhibited her works far beyond Seattle and Japan. She is most known for her glass pyrograph (hot glass) calligraphy, sometimes with watercolors, on paper. The flowing movement of calligraphy catches the power of life itself and activates empty space as if it was the light in the water and the breath in the air.

The fact that art is a form of communication allows some to be immediately appreciated, while others may require a more attentive sensitivity in order to enter the world of the artist’s creation. Cynthia Reeves Gallery from Massachusetts brought a large painting by Paul Ching-Bor. He was born in Guangzhou, China, studied in Sydney, Australia from 1987, and now lives in New York since 1996. “Insomnious V” on paper is hanging vertically, deeply saturated in dark ink. Instead of traditional brush strokes – uncontrolled, multi-layers of wash were applied to leave strips of drip as if it were endless rain in a night forest. There are silhouettes of buildings that emerge in the light of an early dawn in the bottom right-hand corner. This painting is like listening to the deep murmuring of a vocal jazz that is more sound than words.

The Art Fair is the manifestation of the globalized art market, just like many other global mega businesses, fiercely competitive, moved by greed or economics and ever-changing trends that control the market value.

This may fool and blind some to the creative stimulus of artists themselves and influences the ebb and flow of the existence of the art galleries. However, because of the Fair, even beyond the big price tag, we can see works of art by artists from different regions.

By distilling many art works through your own eyes, you can find an space of genuine creativity. Most of the artists mentioned here have roots in Asia though they came from their own distinct personal backgrounds and different cultures. Settled in the United State, they join and create a new history of America, which itself is increasingly a globalized world with the new immigrants from diverse countries.

Despite increasing barriers, I hope, through art, we can communicate and understand other citizens who are migratory birds that fly beyond artificial borders.