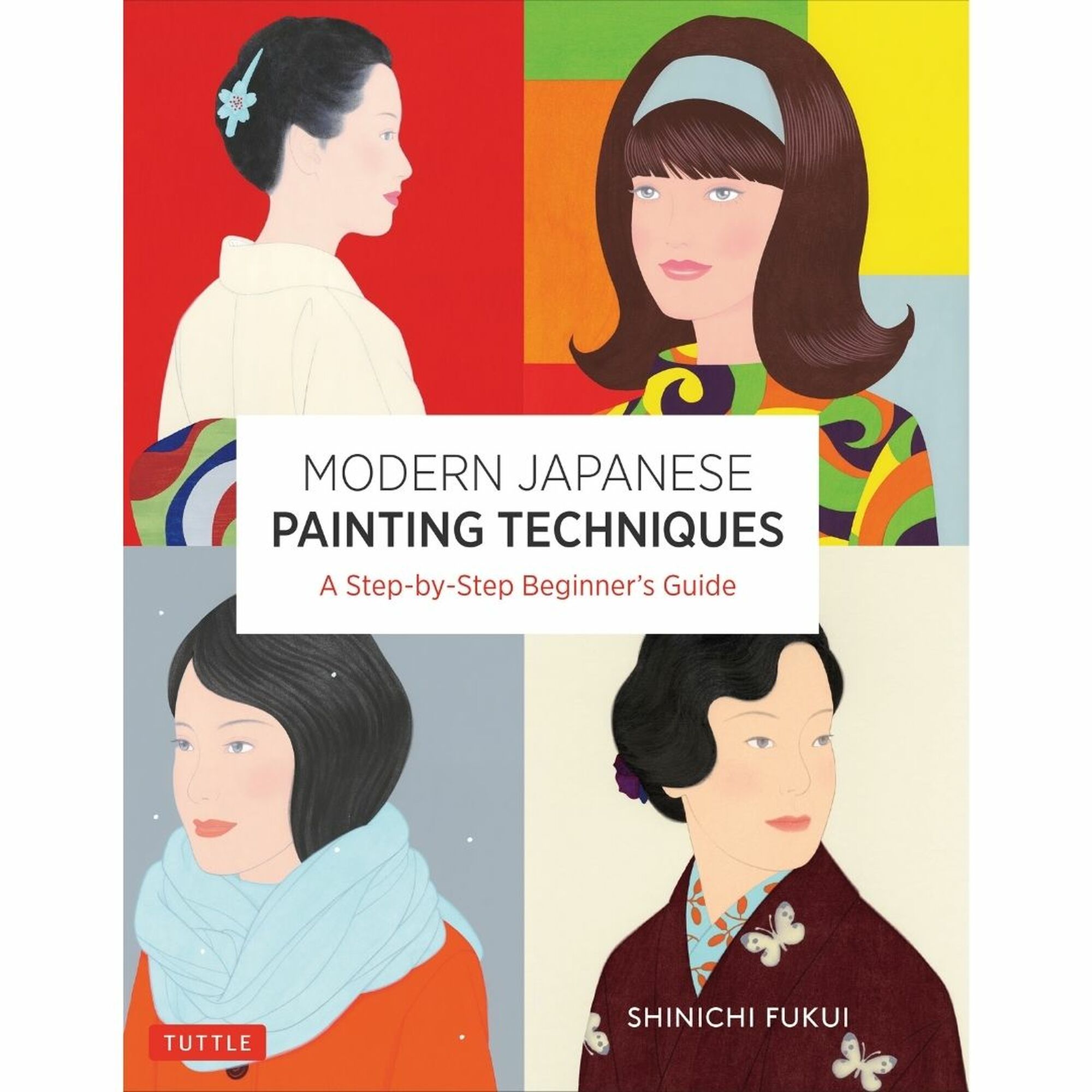 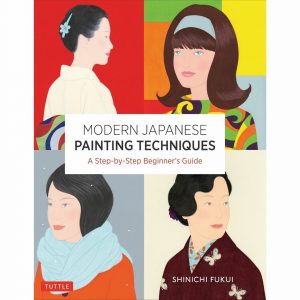 For as long as I can remember, I’ve been fascinated by art. My bookshelves are brimming with artist biographies, exhibit catalogs and technique manuals. But regardless of my collection’s swelling proportions, I’m always on the lookout for its next addition—especially one that’s particularly novel. That’s why I had such high hopes for Modern Japanese Painting Techniques by illustrator Shinichi Fukui. The jacket declares the book “makes it easy for anyone to create wonderful Japanese-style paintings with easy-to-use acrylic paint!” My curiosity piqued, I began reading with eager anticipation. I discovered an attractive and informative volume, but one whose lessons are of limited benefit to beginners.

The first thing readers will ask themselves is, “What makes these paintings ‘Japanese-style’?” With their simplified forms and flat compositions, Fukui’s portraits could easily be construed as American pop art. Perhaps aware of the ambiguity, the author explains that his art follows in the tradition of Nihonga—a specific, if vaguely defined, genre of painting.

Historically it was characterized by five traits: no emphasis on realism, no use of shading, light color tones, use of outlines, and simple expression. The style is traditionally painted with mineral-based pigments, but Fukui uses modern acrylics instead. He also favors a brighter than ordinary palette to give his work a more contemporary appearance. “It may not look like Japanese painting anymore,” he concedes, “but I am not overly concerned about keeping with tradition.”

Before introducing his painting method, the author shows how to photograph a model, sketch rough compositions, and assemble painting materials. These materials include paints, inks, mediums, masking fluid and others—a daunting assemblage for novice artists. Readers of all skill levels will enjoy a brief chapter profiling seven professional illustrators. Their work demonstrates the wide variety of expression found within modern Japanese painting.

The heart of the book is an examination of the author’s own approach. Fukui works in the bijin-ga, or pretty woman genre, and all of his examples focus on women. Sometimes his subjects are demure figures in elegant kimono, in others, they’re modern fashion plates. The portraits are accompanied by scores of photographs identifying key steps in their production, from sketch to completion. While there are twenty-one paintings in all, only the first two include detailed step-by-step instructions. The rest summarize crucial moments in their production to clarify Fukui’s process.

His method’s most unusual feature is its extensive use of masking film. Fukui employs these transparent adhesive sheets to produce clean, sharp divisions of color. His technique is to apply the film to portions of his sketch, paint in the surrounding color, then use a craft knife to cut sections of the film away. More color can be added and the process repeats. Of this unusual technique, Fukui says, “It’s faster to use masking and slap the paint on rather than carefully applying paint with a brush to each part.” This may be so, but many learners are likely to find the approach laborious and wearisome.

Beginners are also likely to become confused with the brevity of some of the instructions. In one example, Fukui asks his readers to paint in some background windows. He neglects to tell them to mask off the surrounding building first. In another instance, a butterfly mysteriously appears in an illustration’s corner. It’s left entirely up to the reader to work out its creation. While these types of omissions won’t pose many difficulties for experienced artists, they will be stumbling blocks for those just starting out.

It’s worth considering that the subtitle, A Step-by-Step Beginner’s Guide, was absent from the book’s original Japanese release. Fukui writes with an assumption of his readers’ fundamental artistic proficiency. He omits steps of his process and abbreviates instructions, trusting his audience to fill in the gaps. For seasoned artists, Modern Japanese Painting Techniques provides a valuable insight into the methods of a successful professional. But budding creatives considering the book may want to think twice before picking up their brushes.