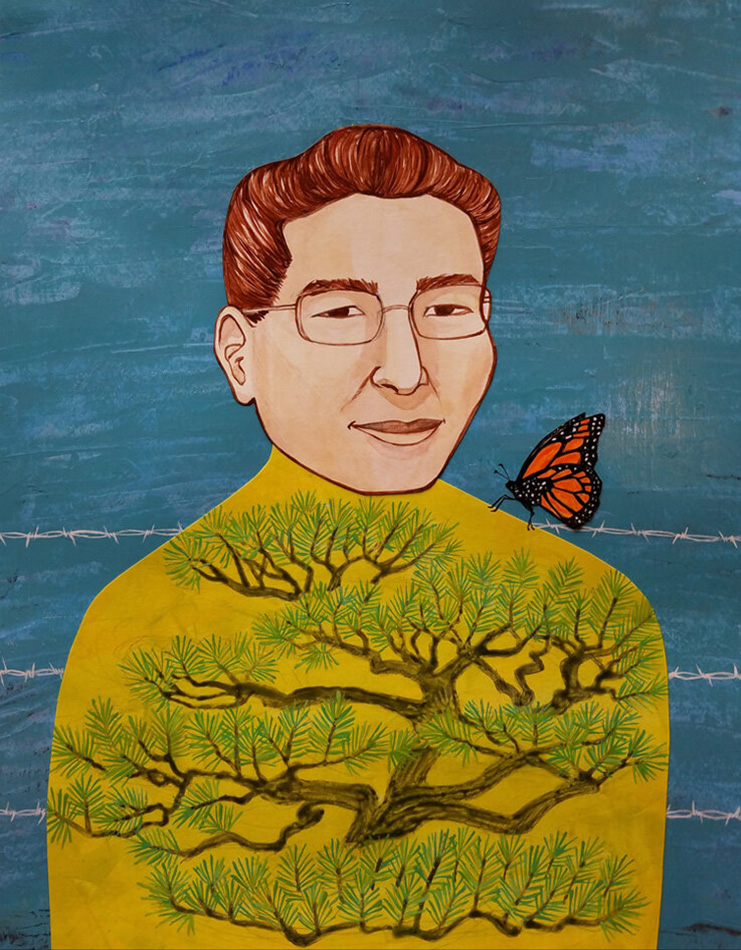 Once a high school student working in graphic design and illustration at the International Examiner, Michelle Kumata is now presenting an art exhibit at the Seattle Japanese Garden called Northwest Nikkei to commemorate the creation of the garden in 1960.

Kumata attended a non-diverse private high school where she began to understand the meaning of being a minority. She felt culture shock coming from a largely diverse middle school and sought out her Asian American community in a taiko club. There she heard about the International Examiner and dedicated her senior project to working at the newspaper and fell in love with art. After years of success as a graphic designer at the Seattle Times and an exhibition coordinator at the Wing Luke Museum, Kumata decided to explore her own history and culture through art.

“I worked at the Wing Luke for 12 years, and left to explore my own story,” Kumata said. “I had been helping other people tell their stories but hadn’t delved into my own.”

The term nikkei refers to those part of the Japanese diaspora. Kumata’s exhibit features portraits of Japanese Americans in the 1960’s including historical figures involved in establishing the garden. One example is the portrait of Juki Ida, the master gardener, who worked with a team of local Japanese Americans. After WWII ended, it took years to start the creation of the garden due to anti-Japanese sentiments. Kumata wanted to show Japanese Americans as an essential part of the culture and community at the time and not the “forever foreigner.”

“I’m hoping people will look at these paintings and identify with them on a human level. In these works, I’m taking more of a positive angle,” Kumata said. “I wanted to celebrate the garden and the Nikkei community. My tone is a lot more positive and imaginative, and I am hoping to connect with people in that way.”

Kumata researched the garden at the Elizabeth C. Miller library and the Wing Luke Museum. She found old photos and newspaper articles to base her portraits on, including one about the Japanese American Citizens League in 1960. One such person is Nancy Sawa Tanaka, the only person depicted in the exhibit who is still living. Through this connection, Kumata was able to ask Tanaka about her reflections on the importance of the garden. In choosing portrait subjects, Kumata wanted to show a diverse community.

“I wanted to represent and amplify our story and our people,” Kumata said.

One of the portraits is called Black Pine, depicting Richard Iwao Yamasaki who worked closely with Juki Ida. Although Yamasaki didn’t speak much Japanese and Ida didn’t speak much English, the two men developed a mentor/mentee relationship. Yamasaki is painted with a pine tree. He and his brothers tended to the tree before the war, and after being incarcerated in camps they continued to dutifully tend to that tree. When he retired, he donated the tree to the garden where it still lives at over 100 years old. Kumata wanted to capture this story in the portrait as a symbol of the Yamasaki family resilience through the camp experience and their lives after.

Kumata hopes that this exhibit will inspire young people to ask their elders about their stories and develop a stronger connection with their heritage and identity. She believes it is important for everyone to learn about these stories that are often forgotten.

“I really hope that people will connect to the images. I think there are so many untold BIPOC stories, and it’s really important for everyone to have…an opportunity to learn about these stories. Especially now, not just for younger people but for adults to be exposed to a different perspective,” Kumata said. “But I also want them to connect to it. I want people to see Japanese Americans as humans and to have empathy.”

The Northwest Nikkei exhibit is on view now through October 31, 2021, from 10 AM to 3 PM at the Seattle Japanese Garden. There are capacity restrictions due to current health and safety guidelines regarding Covid-19,reservations are required for Fridays – Sundays and hours change each month. “For information on admission fees and hours, see the Seattle Japanese Garden website: https://www.seattlejapanesegarden.org/location-and-hours