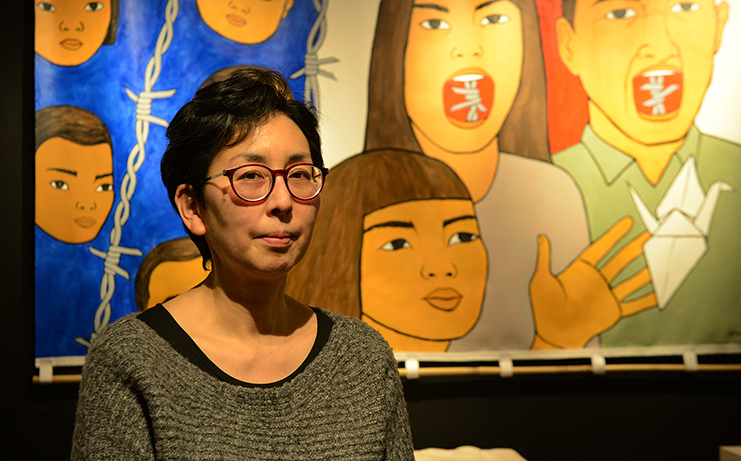 On February 19, 2022, Seattle artist and illustrator Michelle Kumata again comes face-to-face with her community’s shattered past.

Exactly 80 years ago, President Franklin Roosevelt signed Executive Order 9066, the infamous federal mandate that authorized the imprisonment of her grandparents in Minidoka War Relocation Camp, Idaho, a desolate concentration camp constructed to hold 13,000 residents deemed security risks by the U.S. government. Over 120,000 Japanese Americans on the West Coast—two-thirds of whom were American-born citizens—were incarcerated in 10 camps during the duration of World War II, without the benefit of due process.

To mark this anniversary, Kumata has created two riveting art installations which explore the forgotten contributions of Japanese American pioneers before they were unjustly uprooted and forced to part with their treasured possessions, homes, businesses and farms.

One installation is featured at Bonfire, a storefront gallery at 603 S. Main, in the heart of what used to be a bustling Nihonmachi or Japantown. The exhibition, titled “Regeneration,” consists of large canvas paintings, 11 small framed paintings, handkerchiefs with quotes painted on the surfaces, and small boxes covered with furoshiki, a traditional Japanese wrapping cloth. The portraits were inspired by actual black-and-white stills from Takano Studio, a pre-World War II community business. Kumata sketched the portraits on brown craft paper, using pencil and acrylic paint, setting the images in ordinary vintage frames.

The second installation, titled “Emerging Radiance: Honoring the Nikkei Farmers of Bellevue” is in the lobby of the Bellevue Arts Museum, on land that was once a fertile expanse of Japanese American farms. The installation is a four-sided wooden replica of a farmhouse covered with a large mural and individual portraits. It pays tribute to the 60 forgotten families who grew strawberries, peas and other crops before they were forced from the area during World War II.

“I’m sad because most of those farmers never lived to get the recognition they deserved,” Kumata said.

Jerry Chihara served as architect for this project. Thanks to creative director Tani Ikeda, three of the nine portraits have an “augmented reality” feature, allowing viewers to hear fuller stories from the Densho archives by activating a QR code on their mobile phones.

Kumata, a native Seattleite, grew up in Mt. Baker. After attending Asa Mercer Middle School, she transferred to the Bush School, a private high school where she felt “different from her classmates” for the first time in her life. Kumata learned very little in school about what had happened during World War II.

“My parents were both born in camp so they didn’t have memories,” she explained. “My paternal grandmother just shared more of the funny or light memories: getting her boots stuck in the mud. My maternal grandparents spoke little English, and we never had real discussions. I had no sense of the gravity of the incarceration.”

As a young person, Kumata struggled to find her identity. She began by joining a Japanese American taiko group. She also began an internship as an illustrator at the International Examiner in her senior year of high school.

“It was powerful to have my work published,” she recalled. “It was empowering to be seen and to think about other people seeing my work and relating to it. That experience helped boost my confidence and pride as an Asian American and a Japanese American.”

This involvement led her to the Wing Luke Museum, where she became a contractor on a major exhibition to mark the 50th anniversary of Executive Order 9066. She served as a project co-chair, along with Sally Yamasaki, Harry Fujita, David Takami, Leslie Matsuda and Hannah Yamasaki. The exhibition, titled “Executive Order 9066: 50 Years Before and 50 Years After,” featured hundreds of rediscovered photos and artifacts and dozens of stories told in the voices of the second-generation Nisei. It included a recreated barrack from Camp Harmony, the temporary assembly center in Puyallup which housed internees before they were transported to Minidoka.

Kumata headed up the design of the exhibition, which filled the entire Museum gallery. It was a blockbuster, attracting over 10,000 visitors during a six-month run. It received several museum awards and catapulted the Wing into national prominence.

Sally Yamasaki said she worked daily with Kumata, sometimes spending all night at the Museum with her. “I was so lucky to get to know Michelle and to see her artistic eye, intelligence, tenderness, humility, integrity and humor,” she remarked. “We would often listen to community members who had been incarcerated tell their stories, sometimes for the first time publicly. Michelle, with her open nature, would listen deeply. I would see her at times blinking and dabbing away tears.”

After working on “Executive Order 9066,” Kumata was employed as an illustrator and designer at the Seattle Times from 1995 to 2006. She returned to the Wing Luke Museum as a full-time exhibit developer from 2006 to 2018, stewarding many other community-based exhibitions created in the same spirit as “Executive Order 9066.”

“That experience with ‘Executive Order 9066’ really changed the way I looked at museums and it also helped build my skills in community building,” Kumata said.

In 2018, she left to pursue her independent artistic interests.

“All of my work in the community—participating in taiko, the Examiner, the Wing Luke Museum and the Seattle Times—have had a huge influence on how I approach my art now. Heritage, identity and legacy are my main themes. I integrate family and community stories.

“We’ve lost many of the old places in Nihonmachi, but we can still preserve and remember them. What does it mean to be Japanese American? It doesn’t have to be one thing. The community is evolving. We can transform and make our own identity.”