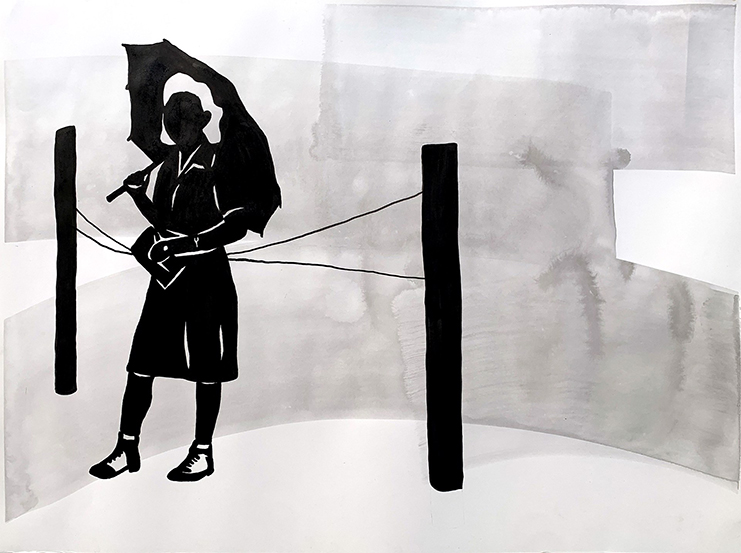 Lauren Iida’s Citizen’s Indefinite Leave captures the story of her family’s incarceration in Tule Lake with enticing and detailed paper cutaways colored with watercolor and ink. Iida focuses on her grandma’s older sister, Clara, whose journey unfolds throughout the exhibit.

Born in Seattle, Iida earned her Bachelor of Fine Arts degree from Cornish College of the Arts in 2014. Her work has since been exhibited in a number of galleries, including ArtXchange Gallery, Tacoma Spaceworks and Columbia City Gallery. She founded Open Studio Cambodia, a collective in Siem Reap, Cambodia that provides support for up-and-coming Cambodian artists. Her art is often influenced by her work in Cambodia and her family’s incarceration during WWII, as depicted in Citizen’s Indefinite Leave.

The title Citizen’s Indefinite Leave comes from the “indefinite leave” pass granted to Clara before the end of internment. She traveled alone from Tule Lake, CA to Washington State to be with her fiance where he worked, sponsored by a white man. Many of the cutaways depict thought-provoking images of life at Tule Lake.

A trilogy of black and white images titled Limit 1, Limit 2, and Limit 3 each show a lone girl pressed up against a fence made of string. In each one, the girl appears to be contemplating life beyond the “limit,” looking outward into the white and gray surroundings. Although simple, the trilogy conveys a strong feeling of loneliness and unsaid woes of these young girls unjustly incarcerated. Iida does a brilliant job of capturing a whole story in a few brushstrokes.

The characters in Iida’s exhibit embody the families of her grandparents and great-grandparents. She had access to Densho’s archives and her family’s photos, using both as inspiration for the scenes depicted through paper. Iida was awarded a Densho Artist-in-Residence Award in 2021.

Iida’s main art form is hand-cut paper. Her previous piece Memory Net is a 30-foot long paper intricately cut to resemble a fish net that catches “Memories.” The net features countless objects including a wine glass, an envelope and a small table.

This incredible piece of art is featured in Citizen’s Indefinite Leave in the pieces Preservation and Transplanting. Preservation depicts a woman seemingly knitting the memory net holding dice, glasses, flowers, and fruit. This collection of items could be an homage to the pastimes of internment. Many Japanese Americans began gardens outside their barracks, despite the harsh weather several camps faced. Children entertained themselves with games while adults created entire communities including schools, newspapers, police stations, and sewing classes. On the Densho website, Iida describes the glasses as a symbol for “pursuing education and holding oneself to a higher moral standard in the face of oppression.” Preservation could also be an homage to Iida herself as she “preserves” these memories in her artwork for future generations.

Transplanting captures three individuals bent over the memory net flowing out of the frame. They hold the net, appearing to examine the contents. The title of Transplanting alludes to, perhaps, the transfer of seeds to dirt so they can grow and prosper in the coming season. The memories of the net are being transplanted into the hearts and minds of these individuals, as this art collection does for those who view it.

An interesting note is that Transplanting was created in 2020, before Preservation. Since Preservation shows a woman knitting and therefore continuing to create the memory net, one might assume that Preservation would come before Transplanting. However, this timeline discrepancy introduces the idea that the preservation of memories is not a linear, ended event. It is cyclical. Iida preserves her family’s memories in this collection, inspiring viewers to continuously share and remember.