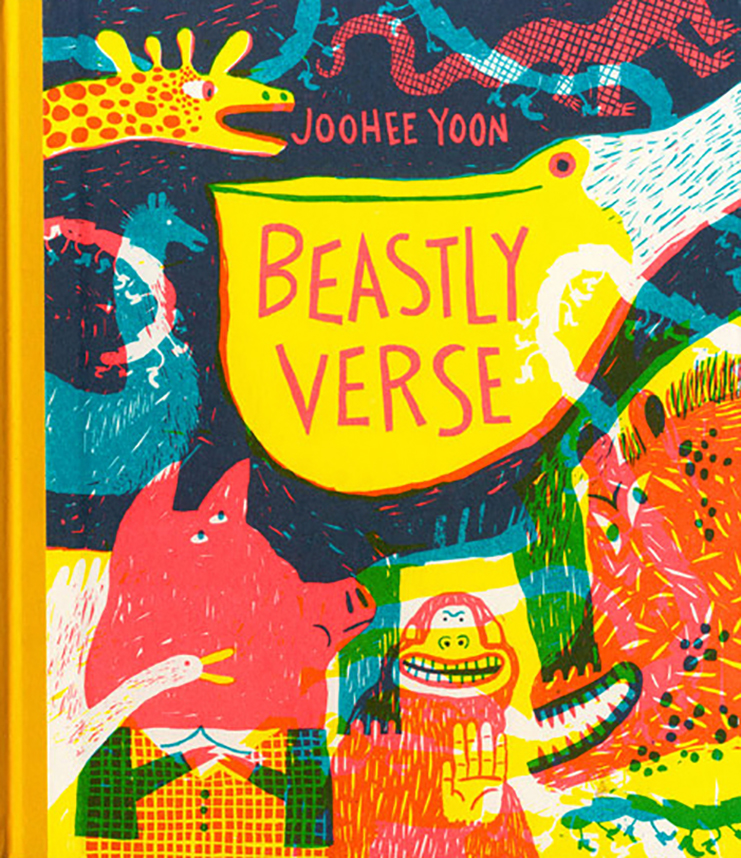 Illustrator JooHee Yoon lets her imagination run wild in her latest book publication, Supposing…., written by the late Scottish poet and translator Alastair Reid. This new edition was originally published in Portugal, then made available in Dutch and Korean, and now, an English edition has been created for U.S. readers.

The initial publication of Supposing… came out in 1960. “A Portuguese publisher, who had seen my illustrations at a local exhibition, contacted me to see I might be interested in working with them to reimagine this book,” Yoon said. “I loved Reid’s writing the moment I read it.”

Yoon describes Reid’s text as deceptively simple at first. “The text is so imaginative, almost like a stream of consciousness, and with a very dry sense of humor and also an element of critique regarding human nature,” she explained. “I’d never read anything quite like it before, especially in a book intended for children.”

As an illustrator, Yoon appreciates the open-ended nature of the words. “The text is always in first person, so the reader doesn’t know the name or gender of the main character,” she said. “The previous editions always featured a boy, so I thought it was time for an update. I thought it would be interesting to expand on this and have both a boy and a girl character, along with a dog sidekick.”

This international collaboration harkens back to Yoon’s childhood. “I had a lot of picture books from Europe as a kid growing up in South Korea,” she remembered. “It was really interesting to be surrounded by books from many different countries, with very different illustration styles and techniques. I think the variety is what really stayed with me, and in my own work today, I tend to explore many different materials and approaches.”

Yoon decided to study illustration and printmaking at the Rhode Island School of Design, where she now teaches. “I learned to work in overlapping color layers through screen printing, and this process made a lot more sense to me than mixing paint and putting it on canvas,” she reported. “Working with a limited color palette was also something I found enjoyable, almost like solving a puzzle, trying to figure out where each colored shape went to make a discernible image.”

The capricious nature of this work is part of the excitement for Yoon. “The process of printmaking involves specific steps, a lot of planning and control, but at the same time there is an unpredictable quality to it,” she said. “Ink can spill, layers mis-register, and this element of surprise and unforeseen mistakes lead to interesting results I couldn’t have imagined.”

On her website, Yoon shares a variety of her books and her illustrations. “I think each of my books are an exploration of my interests, so they stand out to me in different ways,” she elaborated. “I am an avid reader, so I enjoy finding old texts that I think deserve to see the light of day once more.”

For her first project, Beastly Verse, Yoon curated a collection of animal-themed poetry for children. “Some of the poems are old favorites and others were newer findings I came across in my research,” she recalled. “I wanted to shine a light on poetry, which I think is especially fantastic for children, since the rhythm lends itself to reading aloud and the content can be fantastic.”

Despite being an illustrator, Yoon wanted to make sure the text of each poem was highlighted. “My solution was to create a project where each poem took center stage and was vibrantly illustrated,” she said. “This book also incorporates flaps that open, which add to the visual narrative and an element of surprise.”

As an educator at RISD, Yoon encourages her students to experiment with different approaches. “I think the more methods and techniques students are exposed to, the better, since it’s hard to know what you are good at if you don’t try it out first,” she expounded. “Working with traditional materials alongside digital tools is another key component of my classes.”

Alongside technique, Yoon advises her students to slow down and maintain their health. “Slowing down might sound counter-intuitive, but an illustration career isn’t something that happens overnight,” she said. “Our world moves at such a fast pace now, it can feel like we need to match that speed. But doing something fast doesn’t mean it’s better.”

Despite this wisdom, Yoon is not immune to the challenges of creating a career in the arts. “I’ve been freelancing full time for 10 years now, which has its benefits, but also comes with unpredictability in schedule and income,” she said. “Managing my schedule can be tricky, since I tend to be thinking about my projects even when I am not actively working on them.”

Yoon emphasizes the importance of gratitude and determination. “I have been fortunate in creating a career with my art, but the early years required a lot of perseverance,” she admitted. “When you first start out, no one knows your work or who you are, so believing in myself and that I would eventually make it as an illustrator was a big part of where I am today.”

Her mentors, as well as her own patience, have also key to her success. “I think time is also an ingredient to a successful illustration career, since this is definitely a marathon and not a sprint,” she said. “Now that I am splitting my time between teaching and my illustration projects, there’s a greater sense of stability.”

Best of all, teaching keeps Yoon open-minded. “It allows me to think about illustration with a different perspective, and not take things for granted,” she said. “I am constantly learning along the way as well, which is great.”