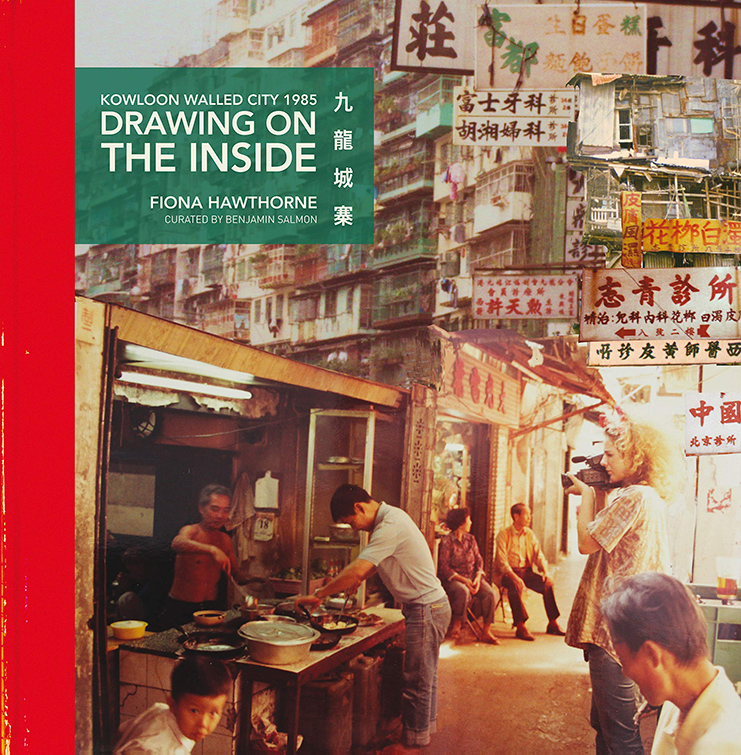 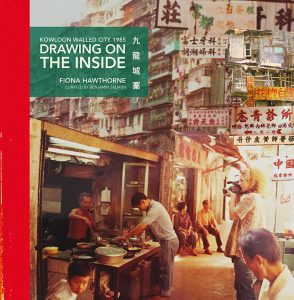 Hong Kong imprinted itself on Fiona Hawthorne who recently released her book of sketches, photography and drawing, Drawing on the Inside: Kowloon Walled City 1985. Arriving as a child of six and living there until she was 14, she had the freedom to wander and explore the city in the 1970s, especially in Kowloon. There she was drawn to the sprawling, crowded Kowloon City Market, a place so close to Kai Tak Airport that shoppers were used to making purchases as planes roared directly above their heads.

Also nearby was the Kowloon Walled City, a place that was “a no-go area,” with rumors that it was controlled by triads. Not included in the original treaty with Britain, even though it was claimed by the British in the following year, it was traditionally seen as a place that existed outside of all laws.

When floods of mainland Chinese took refuge in Hong Kong during the political turmoil of the ‘70s, they gravitated to the housing blocks that sprouted up in the Walled City. These were built quickly and cheaply without regard for comfort or safety, having no elevators, indoor plumbing or sewage system. No longer walled, it was “shocking and unexpected on the urban landscape…a patchwork of chaos with a strange and compelling beauty” that fascinated Hawthorne.

Returning to Hong Kong in 1985 when she was 22, she was determined to get inside this separate city of 60,000 with its thriving community of cottage industries. A childhood friend introduced her to a missionary who worked with Wall City drug addicts, and Hawthorne got her wish. Under the guidance of a young English-speaking resident who was a recovered addict, Hawthorne spent three months roaming through a place few outsiders had ever entered. With her, she brought watercolors and cheap cardboard that was ordinarily used as a base for Mahjong tiles, not as art paper. Carrying gigantic cameras, she took photographs and shot video.

Speaking a mixture of “broken Cantonese and simplified English,” Hawthorne became accepted. She openly showed her work to the people around her, and they encouraged her to continue. “Frustrated by its image of notoriety,” Hawthorne was determined to show the Walled City as she found it, a home of hardworking people who made things – dumplings, artificial flowers, shoes – while living in a world of physical darkness. “I had no idea,” she says, “that I was recording a place that would someday be gone,” but less than 10 years later, the Walled City vanished, its area transformed into a spacious city park.

Hawthorne’s work is introduced to readers with a watercolor of brooding gloom, a dark, impenetrable wall of buildings that on the next page blossoms into an open doorway, flanked by green leafy trees. Windows with protruding poles of drying laundry rise above a kindergarten like sheltering protectors. The vitality of the place immediately springs into life through Hawthorne’s sketches, paintings and photographs, all showing people working, eating, and moving through busy streets and crowded alleyways.

Watercolor portraits show people who face the artist with expressions of complete trust. Nowhere is there a note of menace; often there’s palpable tenderness: a sketch of parents focused upon their baby; a painting of a young couple gazing at each other, clearly in love; many sketches of old ladies holding infants; a multiplicity of smiles.

Photographs show a community that’s strikingly similar to those that can still be seen in Kowloon, one that’s filled with shopkeepers, open doorways that only show steep staircases, old women carrying heavy burdens, window displays of false teeth. In a cafe, a bare-chested and fearless man cooks over an open flame. Jutting signs jostle against each other above the streets and everywhere buildings do their best to crowd out the sky.

In the alleys with their halls of darkness, children play and people chat; in broad shafts of daylight lie impromptu parks and vegetable gardens. Flowers and potted greenery flourish in caged balconies that dot the exteriors of the grim buildings. Food takes on sacramental overtones, as people gather in moments away from work, eating together. On rooftops, a thick forest of television antennas contrasts jarringly with the hazy, ghostly mountains that rise behind them.

A double-paged photograph shows the buildings leaning against each other as if they’re drunk, so precarious and gravity-defying that looking at them brings on a burst of vertigo. Another photo that fills two pages shows these tilting structures embellished with squares of light, intriguing windows that hint at domestic life, and the buildings suddenly become cozy, resting against the night sky.

At the end of this journey, the Walled City is shown in full daylight, revealing a wealth of colors that brighten its darkness. Within its gloom, there’s a glimpse of Fiona Hawthorne at last, her bright hair blazing above the camera that obscures her face, as she creates her extraordinary record of what was once “the most densely populated place on earth.”