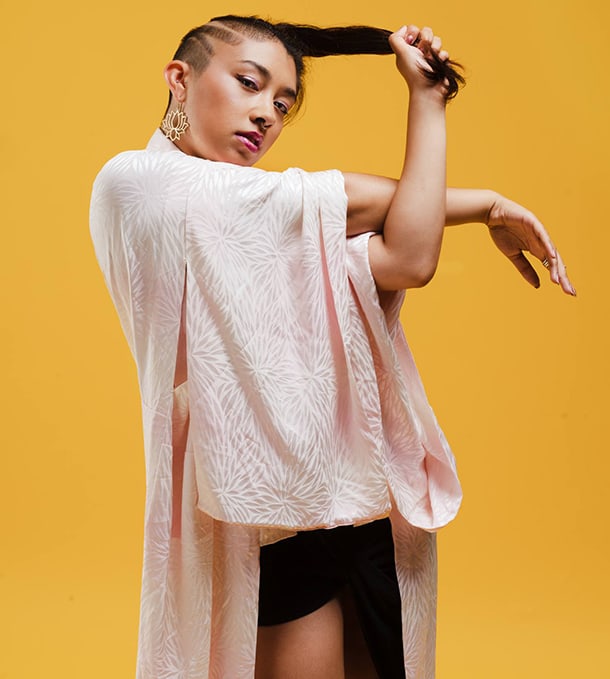 Angel ‘Moonyeka’ Alviar-Langley, the energetic 22-year old queer, femme street styles performing artist, educator, and activist of color, was recently selected as one of four individuals who make up 4Culture’s first cohort of Arc Artist Fellows. The fellowship was open to artists with physical, developmental, cognitive, intellectual and/or emotional disabilities.

This significant grant will allow Alviar-Langley to realize her work in a way that is well resourced, without the strain or urgency of financial scarcity. This freedom will enable her to expand on a few projects she has underway, including What’s Poppin’ Ladiez?! and In The White Frame, as well as cover basic costs of being an artist and attending various conferences across the US this summer, including the Urban Bush Women’s Summer Leadership Institute at Arizona State University and Ladies in Hip Hop in New York. She states that “this money came at a time where I was about to sacrifice on some dream projects of mine because…well…capitalism was being way demanding. And as a disabled person with chronic fatigue and pain, my spoons are so limited. I was going to put my art on the back burner simply to just center my basic needs (food, water, shelter, therapy)”. For Alviar-Langley, receiving the Arc Artist grant gives her permission to fully step into her power and manifest the various projects she has fully, with no financial restraint.

Alviar-Langley’s impressive resume includes being a choreographer and dancer for Au Collective, a dance collective that brings people of color, femmes, womxn, trans and queer folks to the forefront; a teaching artist for Arts Corps and Spectrum Dance Theater; and the director and primary dance coach of Lil Brown Girls Club, to name a few. As a dancer, she uses her art as a way to heal and connect with folks. As a collaborator, she looks to bring in folks from her communities that she wants to support.

One of her current projects, What’s Poppin’ Ladiez?!, is a movement Alviar-Langley founded as a direct response to the heavily male-dominated popping and street styles dance community. It started as an event series and ethnographic research project that provided a platform for women of color to clap back and share their stories through dance, emceeing, DJing, and teaching. With part of the Arc Artist grant, she is looking to expand What’s Poppin’ Ladiez?! into a low-cost or free mentorship program for young women and girls of color, and to bring her students to the Ladies in Hip Hop conference with her so they can see and witness other women in the street styles dance community.

On top of that, she is gearing up for the premiere of her performance piece, In the White Frame, which will be showcased at On the Boards in the NW New Works Festival on June 9th and 10th. The piece explores the multiracial experience in a post-racial America. Influenced by Joe R. Feagin’s theory of the white racial frame, Sharon H. Chang’s book, “Raising Mixed Race: Multiracial Asian Children in a Post-Racial World”, and her own experience as a mixed race Filipinx-American, she calls into action the critical analysis of white framing, and how their identities are racialized in a white world through dance and performance art. Alviar-Langley addresses the racial dichotomies that she deals with as a mixed race individual, and the idea of mixed race folks as being “other.” In the White Frame will also travel to Portland to be featured in Risk/Reward’s 2018 Festival of New Performance, June 29th through July 1st.

There’s no stopping Alviar-Langley – she’s taking space, and doing it on her own terms while being a mentor and role model to young girls of color. Through dance, activism and organizing, she is realizing a more inclusive and intersectional world for her and her community.

Catch Alviar-Langley’s premiere of “In the White Frame” in the NW New Works Festival at On the Boards June 9th and 10th at 8 pm, and in the 2018 Festival of New Performance at Risk/Reward in Portland June 29th through July 1st. To learn more about Alviar-Langley and her upcoming projects, visit www.moonyeka.com, and to support Lil Brown Girls Club visit www.patreon.com/whatspoppinladiez.