You are an immigrant or second generation born in the United States, who has carved out a home in a new world. You are a part of a community. Due to circumstances beyond your control, your country has declared war against your ancestral home and looks upon you with mistrust, hatred, and fear. Your assets have been frozen. The government has ordered you to wrap up your present life’s business and report to a center to be processed for incarceration in a camp located far from home. You can only keep what you can carry. Everything else will be lost unless you can make arrangements to entrust your possessions to someone. Whom can you trust? Your camp accommodations are comprised of a non-insulated barrack with a metal cot and a pot belly stove. You are surrounded by strangers. And you have time that needs to be filled with meaningful activity.

The internment experience of ethnic Japanese and Japanese Americans during World War II provides the historical context for the current exhibit at the Bellevue Art Museum, The Art of Gaman: Arts and Crafts from the Japanese American Internment Camps, 1942-1946. BAM is the 15th venue to exhibit the pieces that range from humble to exquisite in the forms of bird pins, shrines, furniture, dolls, bas relief wood carvings to drawings and paintings—evidence of finding beauty in the worst of circumstances.

According to Delphine Hirasuna, the exhibition’s curator: “Gaman means to bear the seemingly unbearable with patience and dignity. I tried all sorts of descriptive titles, but settled on Gaman as the most appropriate description of the pieces and what they represent.”

Hirasuna is a graphic designer, writer, and third generation Japanese American. As she was sifting through her late mother’s belongings, she discovered a beautifully crafted bird pin amidst trinkets that her father had kept from his service in the famous 442nd regiment of Japanese American soldiers during World War II. When she began wearing the pin, her friend and book collaborator, designer Kit Hinrichs, suggested that it be the subject of their next book project. Research for the book (The Art of Gaman: Arts and Crafts from the Japanese American Internment Camps, 1942-1946) led to an exhibition.

With assistance from the Smithsonian Institution and national Japanese organizations, such as the Japanese American Citizens League, Hirasuna put out a call to families of internees for items crafted during internment in the camps. The 120 pieces in the exhibit are on loan from families whose parents never talked about their experience, which was typical for most Japanese American families. Pieces that had been stored away and rediscovered 60 years later now provided an impetus for discovery and discussion of personal perspectives of the Japanese American internment experience.

In the 10 internment camps that were scattered inland and in the Midwest, initial time and energy were devoted to improving living conditions, but as months and then years passed the internees eventually settled into daily living routines, and began to form communities that resembled their prior lives. Households that had lost their livelihoods took up different responsibilities and had time to engage in other activities like art, which was taught by internees who had been professional artists as well as those who acquired skill in a particular medium.

Realistically detailed bird pins created from scavenged wood and wire, then painted and shellacked are typical examples of the resourcefulness and creativity of the internees engaged in art. National Geographic magazine issues about birds served as resources for these new artists. Wood was the most common material scavenged, as internees had been recruited to complete unfinished barracks. Working with wood is ingrained in Japanese cultural tradition and it was the source for small furnishings, such as Butsudan (Buddhist shrines), chairs, storage boxes, and display cabinets adorned with a beautifully crafted simple clasp or inlaid wood. Ironwood and mesquite were collected around the camps and made into bas relief panels and sculptures using tools forged from scrap metal. Eventually internees were allowed to acquire tools.

The array of expression with limited and scavenged materials is impressive. Slate from the Arizona desert was carved into smooth surfaced sumi inkwells and tea ware. Intricately woven baskets were created from tightly wound crepe paper. Japanese dolls were ornately dressed in kimonos sewn from remnants. A sewer pipe incised with the design of a bird on a plum blossom branch became a vase for ikebana flower arrangement. Tiny shells discovered in the areas around the Topaz camp in Utah were transformed into delicate floral pins and a tiny samurai.

The creators of these pieces were farmers, gardeners, shopkeepers, business owners, and such, who discovered a pool of creativity within their souls. However, most did not consider themselves to be artists, and ceased their art activities after the war, as livelihood concerns reclaimed their focus.

Personal stories enrich the exhibit, such as the drawings of camp on envelopes that contained Mikisaburo Izui’s letters to his son serving in the U.S. Army and artist Chiura Obata’s painting of an elderly man shot by authorities while trying to entice a stray dog.

Professional artists became teachers in the camps, and also had time to hone their craft by painting what they witnessed. Chiura Obata’s animated ink brush paintings succinctly capture camp life in the desert where internees dealt with the extremes of dusty winds and muddy storms. In his painting of the Tule Lake encampment nestled below Castle Rock, Jimmy Tsutomu Mirikitani evokes a ghostly stillness in a style reminiscent of Japanese ink wash paintings from an earlier century.

As World War II recedes further into the past and international conflict continues, the vulnerability of any group’s civil rights makes it increasingly incumbent upon succeeding generations of Japanese Americans to continue to keep their family stories of the internment alive. Gaman reignites that conversation with beautiful, compelling evidence, bringing it into the realm of the personal.

Also on view at BAM are three towering assemblages from furniture artist and San Diego State University art professor, Wendy Maruyama: Executive Order 9066:The Tag Project, in which thousands of paper ID tags of the type hung on each man, woman and child internee during processing, cascade in a columnar cluster suspended ten feet above the floor. Maruyama spent four years in collaboration with the Japanese Historical Society and many volunteers to create 10 assemblages (one for each camp) comprised of tags that represent the 120,000 interned Japanese immigrants and Japanese Americans. She will be talking about her work at BAM on September 5. Details are available at www.bellevuearts.org.

‘The Art of Gaman: Arts and Crafts from the Japanese American Internment Camps, 1942-1946,’ is at Bellevue Arts Museum through October 12. 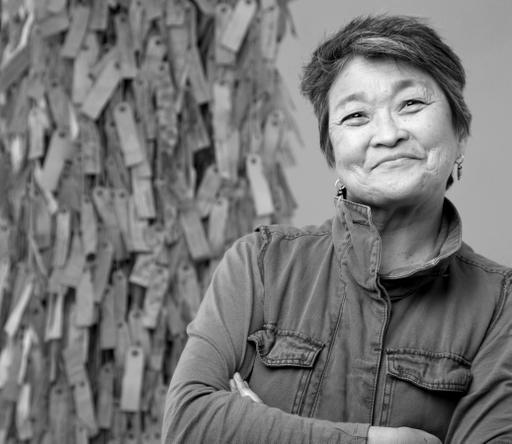