March 11 marks the third anniversary of the great tsunami that hit Northern Japan. This natural disaster did irreplaceable damage to the land and its people. Not only were whole towns and citizens washed away, but a nuclear power plant began to leak. Even today, some areas remain uninhabitable and people cannot return.

Recently, I read about a couple of news items that convinced me things are still in flux. A farmer angry over the government’s slow steps at recovery illegally returned to the fenced-off epicenter of the tragedy and has reclaimed his home. He takes in all the stray cattle left behind by fleeing villagers and vows to stay until authorities admit responsibility and take action.

As recently as last week, I read that the nuclear facility had been leaking again, tainting the water supply and no one even noticed. The people of this area have suffered enough. We hope efforts by the government and aid agencies will bring closure to the damage both physical and psychological as soon as possible. Obviously when tragedy strikes, people all over the world do whatever they can, how they can. Artists are no different. In the following stories, we learn about a Bay Area jazz musician and what he did to bring comfort to the victims of this disaster. And, from Japan, we profile a contemporary woman artist who brings her art to bear on this tragedy. 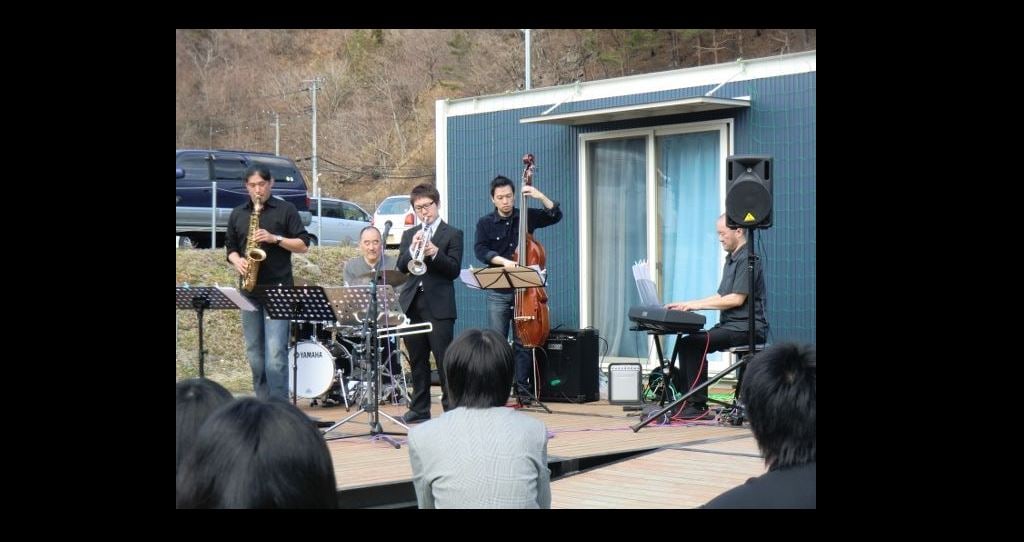 ‘Revelations from the Sea’: A painter’s response to 3/11

Miho Takekawa, a member of the Pacific Lutheran University music faculty and a Yamaha Artist, also held a concert with friends entitled “Smile for Japan—Fundraising and Benefit Concert” on March 9 at Bethany United Church of Christ on Beacon Hill. Besides the concert, a Japanese photo and art exhibit was on display and items by local craftspeople were on sale. A portion of those sales went to a non-profit organization that helps the people of the disaster area.

Finally, Echo at Satsop is a film and sound installation by Seattle artist Etsuko Ichikawa and is a response to the disaster that occurred in her home country on March 11, 2011. It is on view till March 14 at Jack Straw New Media Gallery. A closing event takes place on Tuesday, March 11 at 6:00 p.m. at 4261 Roosevelt Way NE in Seattle. For more information, call (206) 634-0910 or visit www.jackstraw.org. Gallery is open Mondays through Fridays from 9:00 a.m. to 5:00 p.m.