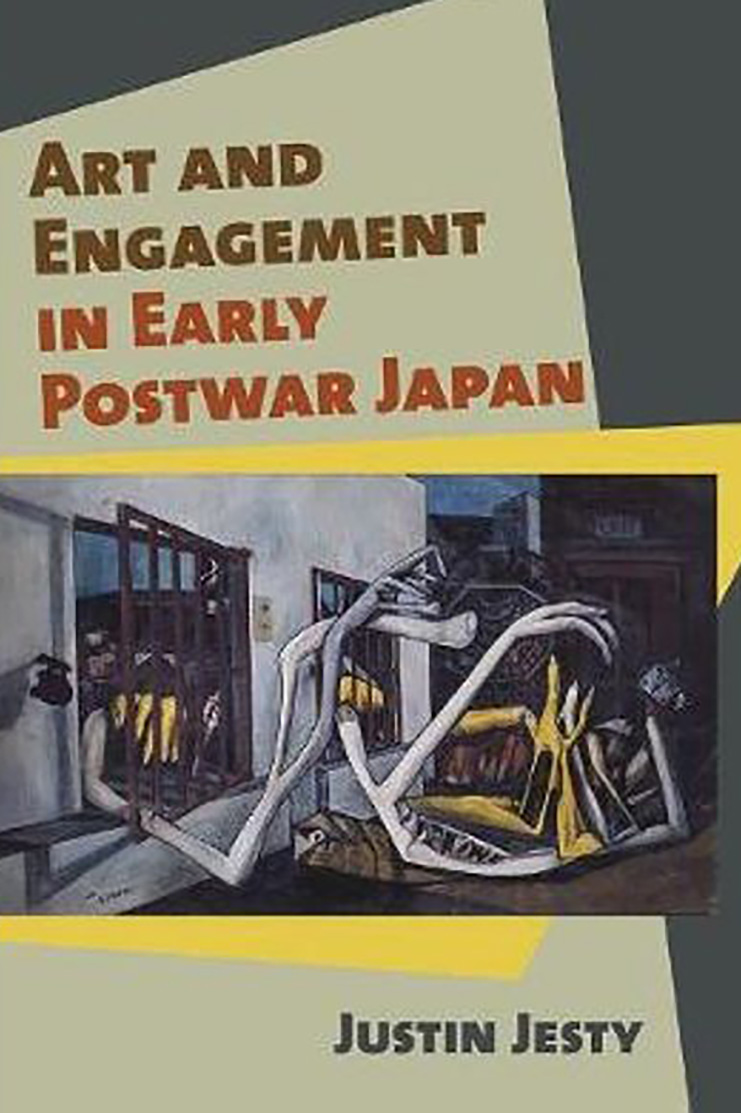 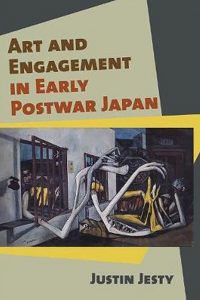 In the Introduction of Art and Engagement in Early Postwar Japan (2018), author Justin Jesty describes this book as “a cultural history of the relationship between art and politics in Japan in a particular time and place: Japan from 1945 to 1960.” It is this and much more.

In Art and Engagement in Early Postwar Japan, Jesty brings to life the times and lives of the artists, educators and creators through captivating vignettes, histories and narration. One particularly memorable account goes, “We will begin with the dark noon of Kyushu-ha – a group performance called The Grand Meeting of Heroes that left a beach charred, two chickens dead, and a group of female mannequins severed at the waist, their heads punctured with nails.” Such is the gift of Jesty’s scholarship and writing to make this work informative, thought provoking and entertaining.

Sensational group performances aside, Jesty begins with the work of wife and husband, Maruki Toshi and Iri, creators of the Atomic Bomb Panels. Describing the appearance of these panels, Jesty explains the role they played during the U.S. occupation of Japan as the artists traveled with the panels to subvert occupation policy and exhibit their works on Hiroshima and Nagasaki.

Their works and the storytelling that went along with the traveling exhibition were aided by community organizers, schools, department stores and activists. Similar to the Marukis, the artists and movements considered in this book are much more than what might be considered artmaking in any conventional manner. These are people who are creating and participating in a new culture, or as Jesty proposes, a democratic culture, described as “a way to draw together the politically or publicly oriented subset of participatory culture.”

In the immediate postwar era, Jesty introduces the creative productions born out of the coal mines as workers “were writing, talking, signing, and printing on stolen time.” These producers of culture were mostly untrained, but in the harsh working conditions of the mines, they wrote stories and poems, sang songs and created prints, which were captured and reported in published collections, some of which also traveled throughout Japan.

The study next turns to the reportage movement, beginning around 1950, which was largely in response to the founding of the People’s Republic of China in 1949, the beginning of the Korean War in 1950, purging of communists between 1949 and 1952, and the official end of the U.S. occupation. Reportage artists were concerned with elevating stories they saw being misrepresented in the media, which had been coopted by militarists during the war.

The thread of cultural producers and a democratic culture continues with Sōbi or the Sōzō Biiku Kyōkai (Society for Creative Aesthetic Education), which consisted mostly of teachers working towards a student-centered arts education and related documentary filmmakers changing the way a subject was captured on camera.

From the earnestness of Sōbi, we return to the night charred beach, dead chickens and mangled mannequins – a final production in the complicated and tumultuous existence of Kyushu-ha. The members of Kyushu-ha were largely untrained artists that Jesty sees overlapping in poetry circles, established exhibitions and contemporary art.

From coal mines, to reportage artists, to art educators and anti-art movements, Jesty guides the reader and gently reminds us of the connections to earlier movements or happenings he has discussed. While academic in nature and content, his style makes this work wholly approachable for anyone interested in art and politics – of any time period or location. Jesty’s work transports us to postwar Japan in a way that opens up possibilities for thinking about this period while creating linkages across producers of culture and connections to the present.

In the closing pages of Art and Engagement in Early Postwar Japan, Jesty reminds us there is much to be learned from the past:

The young reportage artists pursued that investigation fearlessly, even recklessly. Their work did not promise salvation, only relevance: if the country was ever to rid itself of the corruption that bred war, the way forward could only be through unremitting openness to the failures of the past and the uncertainty of the future. (259)

A timely, enlightening and humbling read for the present.