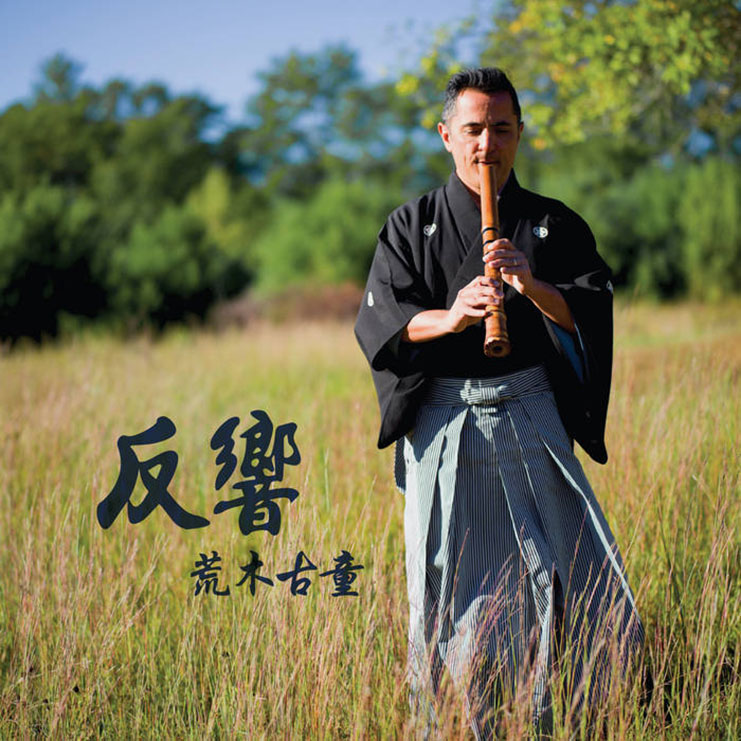 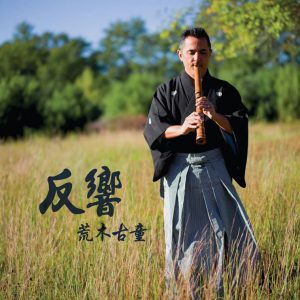 Hanz Araki is one of the best Irish traditional flute players in the U.S. and also a sixth-generation shakuhachi player from a school of Japanese masters that goes back six generations. He grew up in Seattle and now lives in Portland, Maine. Hankyō (Reverberation) is his first solo album of Japanese shakuhachi music made up of traditional family repertoire and played on an instrument hand-made by his great-great-grandfather. Our reviewer sat down to give it a listen. Below are his comments. For details on this recording, go to arakikodo.com or arakikodvi.bandcamp.com.

Hankyō is an album steeped in tradition. The artist, Araki Kodo VI, is sixth in a long line of influential shakuhachi masters; the instrument he uses is an heirloom recently recovered from his great-great grandfather.

The shakuhachi itself, an end-blown flute typically made from bamboo, itself has a distinct place in the history of traditional Japanese music. Most notably, during the Japanese medieval period, the Fuke sect of Zen Buddhist monks used the shakuhachi as part of their meditation practices. The pieces they played, known as honkyoku (which translates literally to “original pieces), were to be performed in accordance with the monk’s natural breathing patterns. These monks, or komusō (“emptiness monks”), traveled across Japan, performing on the shakuhachi for alms and spiritual means.

However, among the sweeping changes that the Meiji Restoration brought in during the 1800s was the abolishment of the Fuke sect and the banning of the playing of shakuhachi. Though this banning would later be reversed, much of the original honkyoku repertoire was lost to time.

With Hankyō, Araki Kodo VI is doing the important work of preserving this style of music in a way that only a master of the discipline can.

The album opens with the track “Akita Sugagaki,” which translates to “Ode to Akita.” Araki Kodo VI, during his final concert appearance in Shimonoseki, Japan, also performed this piece as a duet with his father. Here, though, he performs alone. Though relatively long, the structure of this piece is simple, comprised of a loose set of variations upon a theme. The mood the piece creates is meditative and beautiful, and some lovely melodies emerge from the compositional structure. In a solo instrumental piece like this, each note has to carry so much weight, and here they are given the proper space to breathe and express themselves. A more than worthy start to the album.

We move on next to “Tsuki no Kyoku,” or “Moon Music,” which was written by Araki Kodo II. As per its title, this piece is meant to evoke a still night and the rising of the moon, and this becomes clear through the movement of the melody through the aural landscape. The piece starts off with much stillness, and a contemplative mood is conjured as notes are left to hang in the night air. From this, though, comes the rising of the moon, signified by some dramatic dynamic shifts and crescendos and stunning high notes from Araki Kodo IV’s shakuhachi. Though we are able to appreciate the majesty of the moon, it must continue on its celestial path, and the piece concludes with much of the same stillness and steadiness from its beginning.

Next up is “Dōkyō,” or “Copper Mirror,” written by Araka Kodo VI’s father in 1986. The original title of the piece was Hankyō, where the title of the album itself comes from, and was later changed to Dōkyō after the passing of his mother. Unsurprisingly, this is a much more modern piece, though still very much steeped in traditional stylings. The composition is quite dramatic, with a lot of interesting melodic movement and rhythmic elements. There’s a lot of vibrance that is created because of that. Araki Kodo VI performs this piece with much passion and does well to bring each note to life.

Finally, the album is closed by “Kumoi Jishi,” or “Where There Are Clouds.” Unlike the previous piece, this one hails all the way back from the Edo period, appropriate for an album so steeped in tradition. However, this piece is similar to the previous in that it’s dramatic and dynamic, though it also possesses a playfulness that is unique among the tracks on this album. There is a distinct liveliness to it, brought out by the movement of the melodic passages and the color of the harmonies. I find that it’s an interesting choice in album construction to close with this piece, as it leaves the listener with a sense of lightness after a more serious and contemplative beginning.

Kurosawa Kinko founded the Kinko Ryu style of shakuhachi, from which the Araki style descended. 2021 is the 250th anniversary of the passing of that foundational master, and this album feels like a more than worthy celebration of that anniversary. It is a showcase of a virtuosic performance from Araki Kodo VI as well as an exploration of different pieces of shakuhachi music, across different eras, moods and feelings.