Friday, December 5, 5:00 p.m.—The International District dims as a fogged dusk envelopes the streets and a windchill sweeps with a swiftness that cuts through your coat. On 6th & King, The Beacon dance studio glows with light and heat. Inside, the space is packed tight with high-spirited people socializing and dancing with precision to the hip-hop beats as newcomers arrive in a steady influx, shrugging off their outerwear and backpacks. The occasion is Reign Supreme. The cold, so engulfing seconds ago, is now nowhere.

Reign Supreme, organized by the University of Washington Hip Hop Student Association (UWHHSA), is “the Northwest’s premier crew-on-crew breakin’ competition.” That night, more than a hundred b-boys and b-girls from various homebases showed up to duke it out for a $3,000 cash prize. Each competitor received a handful of time to showcase their moves before a row of stone-faced judges, renowned dancers themselves, for a spot in the finals.

The ages in the room varied widely, from 10 year-old Shawn of the Seattle-based Art of Movement crew, to more seasoned breakers who’ve lived through several waves of the culture.

“I was around the scene long before I started breakin’ in 2011 at 26,” said b-girl Miss Steezy One from San Francisco.

From the prelims, 16 dancers and 16 crews were chosen to advance.

Already a heavyweight in its second year, Reign Supreme is the largest event of the UWHHSA, where UW student Jordan Faralan currently serves as club president. Faralan is the latest in a line of torch-bearers passed on by original UWHHSA founder Mike Huang, who started the club in a dorm with his roommates in 2007. After a successful breakdancing competition called Claws Out a few years back, the club and its following has flourished. 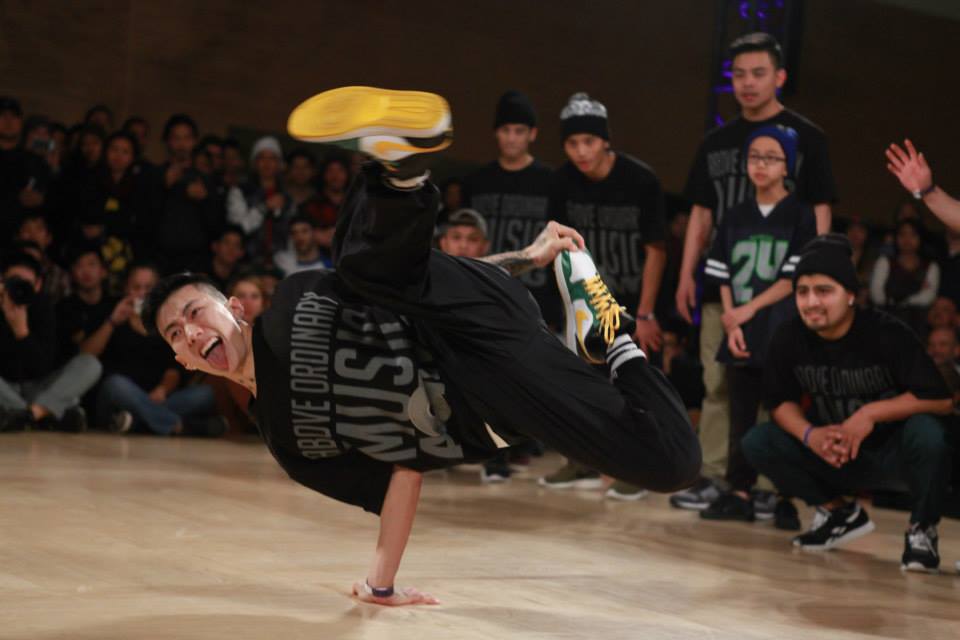 Reflecting the breakdancing demographic of the Northwest, Reign Suprme was primarily comprised of people of color, namely Asian Pacific Islanders. For this writer personally, seeing APIs with ink-adorned necks and knuckles seamlessly pop-and-lock with a brutal coolness was immensely pleasurable; the sight was a refreshing juxtaposition to the mainstream’s enduring representation of Asians as uncoordinated dweebs, the antitheses of cool.

But the question endures: Why is there a large draw to breakdancing for Northwest APIs? Huang offers the explanation that “the heart of breakdancing in Seattle is in the Asian American community as BOSS Crew, a largely Filipino dance crew, were the predecessors of Massive Monkees, also a predominately Asian American dance crew, who are one of the most influential breaking crews in the Northwest, if not the world.”
Because breakdancing is an art form that rose from “youth coming from nothing and being something through their own means,” Huang continued, “breakdancing is liberating for minority groups. That’s powerful for Asian Americans who sometimes lack a voice in the community or don’t necessarily relate to what’s going on in their greater communities.”

Furthering the analysis, Faralan said that breakdancing “comes easy [to APIs] because of our roots in martial arts and cultural dance.”

The circumstances that birthed hip hop and b-boying, stresses Tacoma-based b-boy Mango, is crucial information because “it’s important for people to know the value of what they’re doing.”

This origin Mango and Huang reference zooms us back to the ‘70s in Sedgwick, NY, to DJ Kool Herc’s house parties where he created looped breakbeats, the sonic backdrop for some serious get-down.

For DJ Kool Herc, a Jamaican immigrant who grew up among black and brown graffiti artists and dancers in the West Bronx, he and his friends were both announcing to the dominant society that “we’re out here,” as well as “we don’t care if you know it, because we perform for ourselves.” According to music writer Greg Tate, what they were doing was “reverse colonization.”

With this history, breakdancing becomes more than a gorgeous craft but also a testament of defiance against segregation, poverty, and violence. Dancers need to know the historical weight of this culture and what they’re representing, said b-boy Mango. “How are you gonna do something and not know the history of it?” he said.

As for the Northwest’s own unique history, a group dubbed the Emerald Street Boys are remembered as the pioneer b­boy crew, performing in the Central District since 1981. According to HistoryLink, the rap/dance crew made a name for themselves by performing at house parties, talent shows, and even a bus drivers’ convention. Alongside hip­hop, breakdancing rapidly evolved, forging a permanent residence in urban youth culture, paving the path for groups such as Massive Monkees to trek decades later.

The finals took place in the UW HUB Ballroom, newly built and with an expansion of glossy wood flooring that just beckons footwork. Battles of the night gradually whittled down competition and built to the climatic head-to-heads where ultimately, b-boy Gravity from New York claimed the 1-on-1 title, and Fresh Descendants the crew battle title. There was also an insanely fun “7-to-Smoke Openstyles” competition, where Federal Way-based dancer Furgaan came on top.

Dance, like sports and other art forms, is near impossible to encapsulate in words, because it ditches verbal language for an expression more fluid and honest. The experience of watching dance doesn’t appeal to the intellect, but somewhere else first, somewhere more primordial. This feeling, no doubt felt by everyone at The Beacon and the Ballroom, is the Gorilla Glue in a community, the psychic stuff that binds people together through the worst of turbulence. For me, RS was a reminder that if history tells us anything about how we live in present day, it’s that sharing art with those you love is indispensable in a strategy for collective sustainment. Among the physical maneuvers, dexterity, and vibrating loop breaks is a palpable sense of community that my trite descriptions can only butcher.

B-boy Jin from New York echoed those sentiments: “The love and the continuation to want to dance never ends. I have been dancing for 10 years and I think the longest break I ever took was barely two weeks.”

“What’s truly hard to describe”, said b-boy Mango, “is the pure experience of it all.”

The robust UWHHSA has events year-round that showcase talented artists, “attempting to exemplify each of the five elements of hip hop: dance, graffiti, emceeing, DJing, and knowledge.” Watch for the Fresh Fit Fashion Show in the winter, Hip Hop Summit in the Spring, and don’t miss these ambitious, brilliant, and talented young people who are not only safeguarding a cultural history but scribing their names on it in gold.