The catalyst for the meeting was a September 28 incident in the University of Washington area in which two men, who targeted Asian women with thrown objects and racist insults, were not charged with any crimes.

The meeting began with an update on the September 28 incident by Lt. Michael Kebba, from the SPD homicide unit, which also oversees malicious harassment crimes. Kebba said that at about midnight on September 28, the suspects, two men, were throwing lit cigarettes from the window of their seventh floor apartment on the 4700 block of University Way NE. At one point, the suspects were also allegedly tossing full beer cans, and a vacuum cleaner.

“It’s [the restaurant manager’s] position and right as a victim not to proceed,” Kebba said. “He was satisfied that the civil process played itself out and those tenants were evicted. … He could change his mind at any point. But at this point the department has this case placed on hold … because the victim does not want to cooperate and pursue charges.”

Although the incident was initially not reported as a bias or malicious crimes incident, Kebba said, a later investigation reported that two unknown Asian women were also harassed by the suspects. A witness said one of the beer cans thrown by the suspects hit the ground and splashed on one of the women. The suspects were allegedly mocking the women based on their race with phrases like, “Moshi, moshi!”

“We positively identified both suspects in that apartment,” Kebba said. “And if we were to have the Asian female victims identified, then we could proceed and refer the case to the city attorney law department for review. … If you have any information out in the community about who these victims are, we would like to speak with them and identify them.”

Not an Isolated Incident

Asian and Asian American students are increasingly targeted by violence and discrimination on and near campus, according to OCA Greater Seattle vice president and UW Asian American Studies professor Connie So.

“Teaching at UW, I get students telling me these stories all the time,” So said at the meeting. “So it’s not infrequent and of course I’ve experienced these things at UW. I think our feeling collectively is that it’s not just one incident.”

So said that she often hears from international students about how they were mugged for their cell phones.

So said that Seattle doesn’t like to think of itself as having problems like racial discrimination and that international students don’t know they can go to police.

Murray said he has also observed a rise in hate crimes in the city: “A series of things have happened in the last few years in Seattle … that are very troubling as someone who has spent my life here. … It goes beyond just Asian Americans. … The Jewish Federation—people who were throwing bricks at it. Orthodox Jews have been beat up in Seward Park. Jews are being called anti-Semitic names right in Seattle Center. East Africans have been targeted because of their religion or their dress and we’re hearing these things. For the first time since I was a young person, we’ve seen an uprise in harassment of gay and lesbian folks on Capitol Hill who also seem to be targeted, including two young men who were last seen leaving R Place gay bar and then were found murdered later on. … What’s troubling to me is it’s not limited to one group.”

The Need to Report Hate

Tony Vo, former director of the Asian Students Commission at UW, said that international Asian students don’t see police in a supportive role and so they do not report hate crimes.

Yolanda Eng, an E3! Ambassador for the White House Initiative on Asian Americans and Pacific Islanders, described a recent incident in which a member of her church was called racial slurs while crossing the street.

“The SPD encourages reporting,” Kebba said, acknowledging the scenario Eng described. “If you have a pivotal role in the community, get people to call 911 to report these incidents.”

Kebba said that all incidents of hate crimes should be reported, even in cases where it is a “bias incident” that involves hate speech.

“Hate speech, believe it or not, as ugly as it is, is protected because it’s a freedom,” Kebba said. “But it can cause alarm and it can cause real concern for public safety when people cross the line. … It’s not right to say those things. And we want to find out who those people are because it may be connected to another event, which may be criminal and we could prosecute.”

Murray said there needs to be more education on cross-cultural training and seminars taught by Seattle police on hate crimes. The mayor also suggested reaching out to UW leadership to address hate crimes on campus.

“We do have the names of the suspects,” O’Toole said of the September 28 incident. “We need a victim in order to prosecute. [We need to] identify the … young women who in this particular instance were targeted because we need to hold [the suspects] accountable. We need to show that people are going to be held accountable for this type of behavior.”

Disclosure: Travis Quezon is a boardmember of OCA-Greater Seattle. 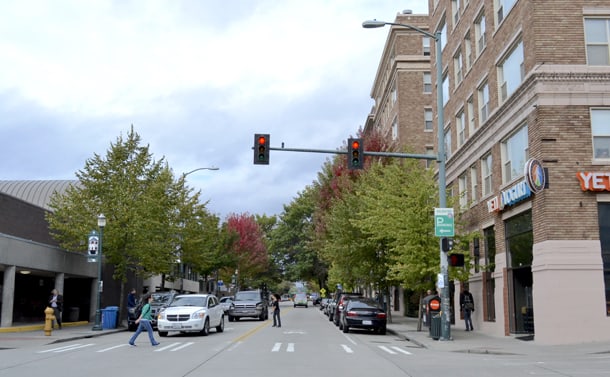