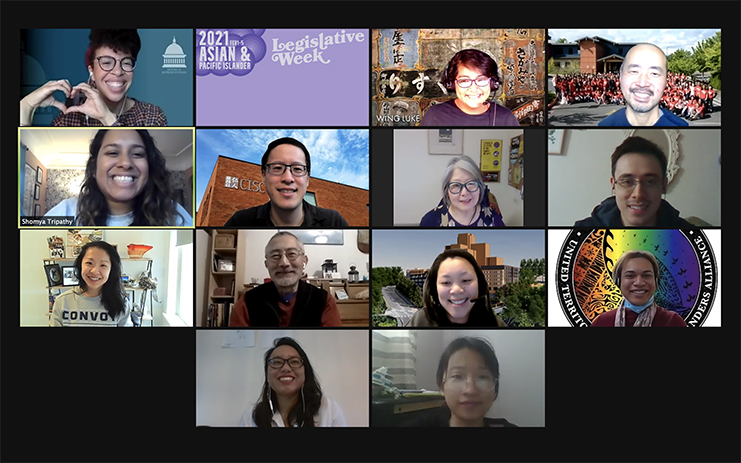 Every other year, The Asian Pacific Islander Coalition (APIC) organizes the API Legislative Day. According to event organizer Shomya Tripathy, the coalition usually busses thousands of API community members to Olympia to meet with lawmakers, advocate for their interests, and all but fill the State Capitol Building.

“On a normal day down here, we don’t really get to see many people from our Asian community,” Sen. Joe Nguyen (D-Seattle) said. “[API Legislative Day] is that one day a year where it feels like your family is coming to visit.”

This year, participants could easily roll out of bed minutes before the event’s 9:30 AM start time on Feb. 1st. Historically a social day of in-person lobbying, API Legislative Day adapted to the current pandemic health crisis and became 58 scheduled Zoom meetings packed into a week.

Despite the drawbacks of digital, the revamped API Legislative Week still operated with what Tripathy believes to be the event’s three major intentions: advocate for policy, build power, and establish a connection between the API community and lawmakers.

The WFTC is modeled after the federal Earned Income Tax Credit to provide relief for families in poverty. While the measure was technically enacted in 2008, it was never funded due initially to the Great Recession and failed negotiations ever since. Nguyen, who is the Senate bill sponsor, referred to the WFTC as a sort of “zombie bill.” It is more formally known as an “unfunded mandate.”

With modifications from the prime sponsor on the House side, Rep. My-Linh Thai (D-Bellevue), the WFTC has been expanded to include Washingtonian’s without a Social Security Number – a major selling point for APIC who has a history of fighting for immigrants.

Folks without a valid Social Security Number did not receive the benefit of federal stimulus checks to address the financial hardships of the pandemic. Because of this, there was no federal support for undocumented immigrants who file taxes with an Individual Taxpayer Identification Number.

“On the senate side, [the bill] is sponsored by the son of refugees,” Thai said, a refugee herself. “It is our honor to honor our parents who have given us these opportunities… it is a testimony to all those who came to this country in whatever shape and form.”

A decade of failed attempts under the program’s belt, Thai and Nguyen are hopeful this year will be different.

Nguyen says as the legislature becomes more diverse, these policies become a higher priority. And with the financial strain of COVID-19, Nguyen argues that more legislators than ever can understand the “transformative” power of government assistance.

“It becomes much more real,” Nguyen said. “The amount of money is no longer a talking point, it’s a tangible thing.”

Tripathy stresses the difficulty of narrowing the interests of such an intersectional community to fit in a 15 minute Zoom meeting. However she noted financial assistance regardless of immigration status as a clear universal need this year.

Folks without a valid Social Security Number did not receive the benefit of federal stimulus checks to address the financial hardships of the pandemic. Because of this, there was no federal support for undocumented immigrants who file taxes with an Individual Taxpayer Identification Number.

Because of the remote session, Tripathy says they were not able to attract as many new faces. APIC drew their participants mostly from those involved in advocacy organizations and folks she called “one-step removed” from those organizations.

But Olympia can be intimidating for even well-connected activists. Tripathy gave her first ever testimony on behalf of HB 1297 in a public hearing during API Legislative Week.

Similarly, Tweetie Fatuesi, who has worked as a community organizer with UTOPIA Seattle for a year and half (predated by plenty of volunteer involvement) found herself lobbying for the first time – or rather the first 10 times over the course of the week.

“It was definitely nerve-wracking,” Fatuesi said. “You don’t exactly see these representatives on a daily basis.”

Physical accessibility is a barrier for many activists, according to Tripathy.

Though remote options can be helpful to some, Tripathy notes tech access, English language proficiency, and digital literacy leave out segments of the community. APIC was prepared to provide interpreters even in a remote setting, but the coalition was not able to reach folks who needed that assistance.

For Fatuesi, the jargon-heavy language of legislation made lobbying feel intimidating even as a longtime advocate. After she got through the first Zoom meeting, Fatuesi says she began to realize the process was not as freighting as she had anticipated.

“You’re seeing familiar faces in leadership positions that you can appeal to,” Fatuesi said of the growing diversity in the state legislature. “It bridges the gap in community efforts and governance.”

That connection between lawmakers and constituents has been a hot button issue in Olympia with Republican objections to a remote session in the interest of public access. Though it is difficult to recreate in-person energy over Zoom, Thai and Nguyen both say they felt strongly about making time for API Legislative week.

According to Nguyen, his calendar is packed from 8 AM to 9 PM, with roughly 30 meetings everyday. Thai recalls casually connecting to be much easier in-person when she could walk with constituents from place to place.

In one of her meetings, Tripathy and other participants spoke with Nguyen’s legislative aide as the senator was in a meeting. Despite being double booked (possibly triple-booked according to Nguyen), he found time to pop in and say hello.

“He knew he’d get ripped apart if he didn’t show up,” Tripathy joked. “It was very cool to see him know folks by name, know that they just had a baby, and care about his constituents.”

According to Nguyen, he and Thai are the first Vietamese legislators in the state’s history. For that reason, Nguyen says he feels not only accountable to the jurisdiction that elected him, but the API folks who feel represented by him in a predominantly white space.

“Even if I just have time to pop in for five minutes, show my face and do greetings – that’s what I do,” Thai said. “That’s what we do when our family visits us. I wouldn’t miss it for anything.”