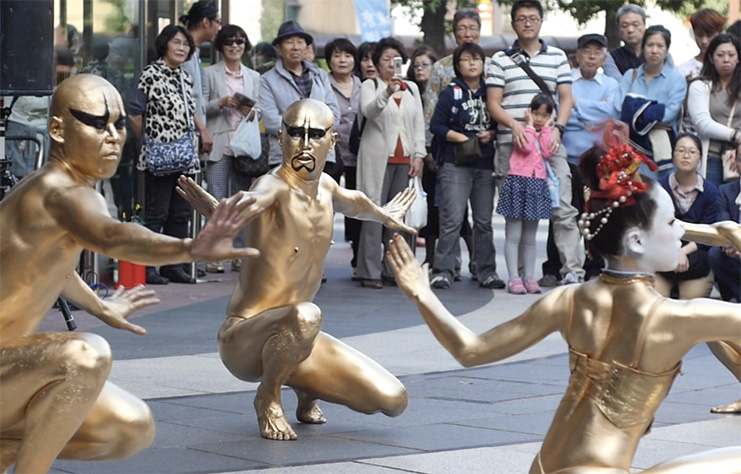 The 24th Seattle Queer Film Festival will be from Oct. 10-20 and will be screening films at Northwest Film Forum, SIFF Cinema Egyptian, and Gay City: Seattle’s LGBTQ Center. The following are some films that may be of particular interest involving the API community. Check out the whole schedule and book your tickets today!

Isabelle C. Santos, otherwise known as Billie, is a transfer student at the all girl’s St. Gerard Catholic School located in a remote town in San Isidro. From the first day, she causes a stir with her short hair, strange shoes, air of indifference and tough-looking exterior. Her brazen inclination to stand out and challenge authority, particularly that of the religion teacher Miss Castro, who is also her aunt, makes them want to avoid her more, yet the fact that she is from Manila has students admiring her from afar for her differences at the same time. Billie wants to skate through her last year of high school unnoticed, but this proves to be impossible, especially since her peers at school have figured out she is a lesbian.

She immediately catches the attention of Emma Cagandahan, the top student at St. Gerard. Although she pretends to agree with her friends about Billie, she is always distracted by her presence. Emma is raised by a single mother who got her out of wedlock and makes a living selling cosmetics. Desperate to leave San Isidro, Emma has dreams of becoming a lawyer, but her dreams are upended when she becomes pregnant. As she secretly struggles with the Catholic principles she was taught in school, she comes to understand Billie better and lets her inhibitions about her interest in Billie fall to the wayside.

As they fall in love, Emma needs to come to terms with her pregnancy and sexuality. As word gets out that she is pregnant, she must deal with her blemished reputation and the threat of being expelled from school.

Billie & Emma is a family-friendly coming-of-age film that deals with family, love, religion, acceptance, teen pregnancy, risk-taking, and the courage to be oneself.

Based on the true love story of Nikki Si’ulepa and producer Rachel Aneta Wills, the film is about Auckland resident Rachel, a beautiful, confident, successful and dyslexic single mother of two. During her spare time, she likes to help out at food shelters and act. Often pursued by men but not often interested in them, she becomes a bumbling idiot when she meets Nikki, a director, at a low-key Maori film festival. Rachel is flabbergasted that Nikki shatters the stereotypes she had of Maoris and falls head-over-heels in love. Faced with this wholly new experience of falling for a woman, Rachel grapples with her feelings and stumbles over how to approach and pursue a love interest for the first time. Encouraged and supported by her mystic best friend Sam, Rachel steps into unknown territory and goes all in, risking pain and vulnerability to go after what may be the path to her soulmate.
Great for people who love rom-coms and super awkward humor, Same But Different is a simple and light-hearted movie that encourages people to embrace the unknown.

Singaram is a fisherman who lives in Meenavar Kuppam, a remote fishing hamlet in South India that had been ravaged by a tsunami. He is the only survivor out of his many siblings and is the sole guardian of his niece Anandhi and his nephew Mani. Although he is single, his desire to raise his own family disappeared with the advent of the tsunami, and his main concern is to do what is best for his siblings’ children. He and his two fishing partners go out to sea every day, but the catch is few. Much of his time is spent worrying about Anandhi, a beautiful and intelligent woman who works as a teacher, whom he feels is wasting her time living with him. Although he finds many eligible matches, she rejects every one of them.

On her way to school, Anandhi runs into Kavita, a photographer from the city who has been hired as a two-week vocational teacher. As they become fast friends, Anandhi finds out Kavita is a lesbian. This revelation changes the way she sees Kavita, and the two become closer.

Although Singaram seems like a gruff, conservative man at first, it becomes clear he is a compassionate and kind-hearted individual who is not only looking out for the best interest of those he cares about, but also for those in his community who are not well off or don’t have a voice. Kattumaram, a word that literally means “tied wood” in Tamil, is a touching and heartwarming film about love, family and community and will have audiences guessing who or what the “tied wood” is referring to.

Japan’s rich gay culture is explored through an impressive collection of interviews from various people on the LGBT+ spectrum that includes artists, dancers, activists, politicians, business owners, academics, musicians, organizers, editors and even deaf queers. It gives an inside look at events and establishments such as Golden Finger, Grammy Tokyo, Department H and various community centers that have long been known as a safe space for the queer community to exhibit people’s creativity, carry out their fetishes, socialize and party, and be themselves.

Aside from Tokyo, the documentary traverses through Osaka, Kyoto and Okinawa, giving some insight into the history of queerness that has been made evident to scholars since the Edo period. It also addresses issues within the LGBT+ community, such as questioning the need for the ever-expanding labels evident from its growing acronym, the hatred often expressed within the community against different subgroups, suicide, bullying and the need for minority voices, such as deaf people, to be heard.

“Song lang” is a small percussion instrument resembling a mixture of a hammer and a castanet; it maintains the tempo in Vietnamese traditional music.

Dung “Thunderbolt” is a ruthless debt collector who will do anything short of killing a person to collect the money owed to his loan shark boss Auntie Nga. His parents were part of the Cai Luong theater troupe (a type of modern folk opera): his mother was an actress and his father was a musician. His father believed that a “song lang” acted as a moral compass for musicians. After his father died when he was a teenager, his family’s debt forced him to work as a debt collector, which has thrust him into a land of moral ambiguity.

When it is time to collect the debt from the same theater house his parents performed at, a rush of memories flood back to him from his childhood. He meets Linh Phung, one of the main performers, who promises to pay back the theater’s debt in full the following day after their first performance. Dung, despite his low opinion of artists, is compelled to watch the show on opening day, and after witnessing a resounding performance, decides not to collect their dues.

After tragedy strikes a family he tried to collect debt from, he feels remorse. Circumstances throw Dung and Linh together outside of work, and they bond. Discovering Dung has a great talent, Linh encourages him to leave the debt collecting business, admonishing him not to waste his talent. As Dung considers Linh’s suggestion, he struggles with the inner demons from his past, while Linh experiences inklings of love for the first time.

Subtle and discrete, Song Lang is a moving story that peels the layers off of two stereotypical roles (gangsters and artists) in Vietnamese society.