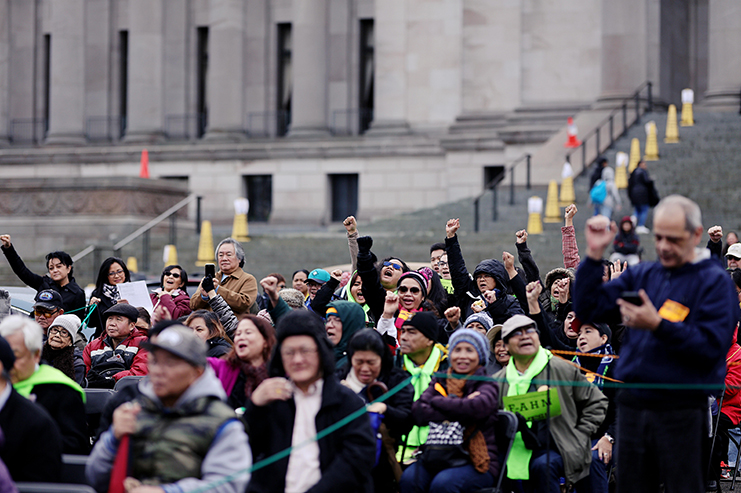 “We’re here for a meeting… honestly I’m not sure, I’m just here to be here,” said Khin Chuop excitedly, fighting to speak through the pork hum bao in his mouth. This was his first time at the state capitol.

He was among a thousand attendees, some posing for selfies with capitol architecture in the background and others broadcasting live on Facebook to their friends near and far. Lines of people streamed from charter buses toward the Capitol Flag Circle where APIC Pierce County chair Lua Pritchard, the emcee, was busy getting the crowd hyped up in call and response.

“Alright, we’re going to talk about what we’re going to do, right? We’re asking the legislature to add another $1 million to naturalization services, yeah!” She got a huge ‘Yeah!” by a crowd that included the Palau, Bhutanese, Bangledeshi and Fijian communities.

“You know this is just practice, right?” Pritchard followed up, with the crowd erupting in cheers.

“We’ve come here to voice our concerns so that they [legislators] will help us…the Khmer, the Vietnamese, the Chinese. If we don’t speak up, they’ll forget about us. If we speak up, they’ll understand us,” said Sinoun Ou, citing the importance of attending the event. “If you can come, you come; if you can’t, you can’t.”

The 2019 Asian Pacific Americans (APA) Legislative Day, organized by the Asian Pacific Island Coalition (APIC), welcomed over a thousand Washington state residents. According to its website, APIC’s origins were in response to an “anti-immigrant provision in the Welfare Reform Act of 1996,” with the establishment of APA Legislative Day that same year.

Also known as the Personal Responsibility and Work Opportunity Act, this piece of legislation was signed into law by President Bill Clinton and ushered in a dramatic change to the welfare system by excluding non-citizens from many social services benefits.

As the crowd awaited an appearance by Gov. Jay Inslee and other legislators, they were treated to a packed agenda of cultural performances.

“I was in the crowd… recording the performances. I then overheard our [Khmer] elders talking amongst themselves [in Khmer] about why there are no Cambodian performances,” said Savong Lam, an organizer for the Khmer Anti-deportation Advocacy Group of Washington (KHAAG) who was attending the event for the first time.

Upon hearing that, Lam sprang into action. “I went to speak with Lua, and she was gracious enough to squeeze us in the agenda. [I] got the music ready, Lua went on stage to announce the performance representing Cambodia, and I went on stage… to greet and invite folks to join us for Romvong.” Romvong is a style of Khmer folk dance performed during cultural events such as weddings and new years celebrations.

“Honestly, I did not expect to see over a thousand people. To see so many people from the API communities come together…[it] inspired me to be more involved in policy advocacy,” said Lam.

In 1996, APIC formed to mitigate the loss in social services that supported immigrant and refugee non-citizens, including the “denial of cash, food and medical assistance programs for low income, elderly, and disabled non-citizens.” Since then, the Asian Pacific American community has gathered once a year in Olympia to lobby it’s elected officials on issues such as public policy, access to healthcare and civil rights.

As the rain intensified, more and more people took refuge in the legislative building rotunda, hanging out on the steps, people watching and sharing food and drinks that they brought for the day. A large group of Khmer American elders amassed on one side of steps, representing several Khmer American enclaves such as Mt. Baker, High Point and White Center.

“It’s dried fish with rice,” said Sinoun Ou, while trading and sharing her dish with other Khmer American elders.

“I brought rice, some char siu pork, and half a roast duck. Nobody wanted to try any of mine,” said Khin Chuop, laughing. “I had so much left over I brought it back home.”

Following the day’s performances, attendees took to their legislator’s office to talk about issues affecting them and their community. Highlighting the difficulty in access for many in the API community to their elected officials, Sokunthea Ok stressed the day’s importance for them to “learn about what they can voice their voice for so they understand their rights. They want their voice to be heard.”

Ok helped organize and lead a group of Khmer American elders to the capitol and noted that this was equal parts citizen lobbying and networking opportunity. “It’s a space for them to also meet other Khmer people and to meet other ethnicities as well,” he said.

This year, the focus for APIC and its allies includes the 2020 Census, I-1000 which seeks to repeal I-200 and re-establish affirmative action, and immigrant and refugee rights.

As part of APA Legislative Day, a delegation of community leaders also meets with the Washington State governor for close quarter conversations.

“I ended up tagging along with Many [Uch],” said Lam, who was present at this meeting alongside Formerly Incarcerated Group Healing Together (FIGHT) co-founder Many Uch.

“After the meeting with Governor Inslee, myself, Toshiko and Many had a…conversation about… education for folks who were incarcerated. Toshiko took us to Sen. Joe Nguyen’s office, and we spoke with Rosa Mai, his legal assistant. Many found a champion for his issue and all it took was communicating with our representatives,” said Lam.

She added, “I think in our culture, it is not often that ordinary folks get to be at the table. To me, an event like APA Legislative Day shows that collectively, no matter our background, we have power and when we come together to advocate for our community, our leaders have to listen. The power is truly in the people and when harnessed and coordinated properly, great things will happen.”