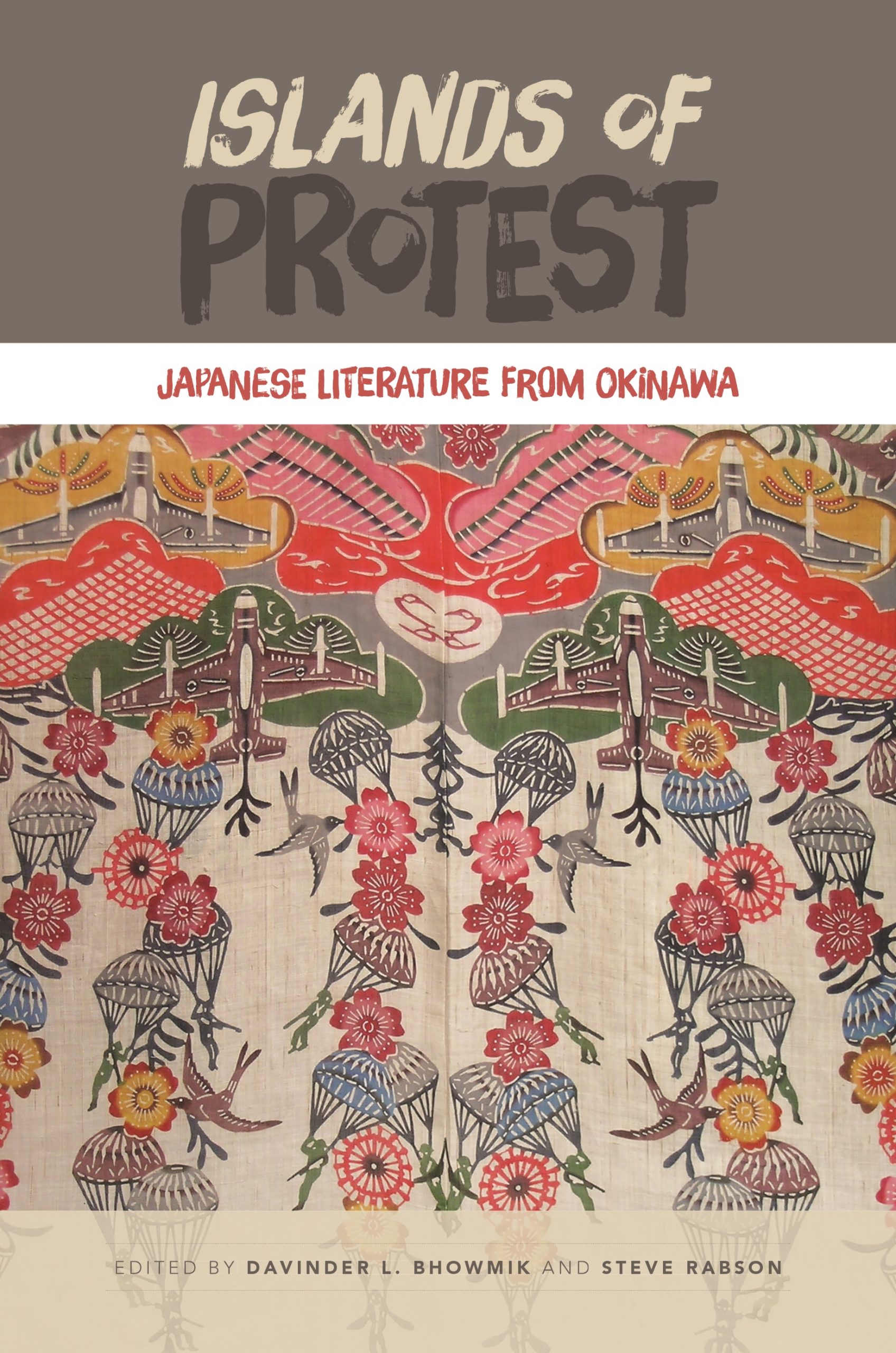 The history of the island nation of Okinawa is a complex one. Troubled relations with China, Japan and the U.S. have made the citizens of this country a strongly independent people. Japan annexed the islands, formerly the independent kingdom of the Ryukus in 1878 and tried to suppress the local native culture.

During World War II, the Japanese military use of the civilian population caused many of the native population to lose their lives in the fierce fighting that ensued. That sacrifice continues to this day where half of the 50,000 American troops in Japan are stationed in Okinawa. That situation has been exacerbated by reports that the American military stored large amounts of toxic Agent Orange on the island in the 1960’s, that there have been accidental crashes of American military aircraft that have caused civilian casualties and the arrest of military personnel who have killed or raped native women.

Recently, tens of thousands of protestors in Okinawa vowed to stop the planned relocation of a U.S. military base to an environmentally fragile coastal site. The IE interviewed UW Professor Davinder Bhowmik who together with Steve Rabson has edited an anthology of literature, Islands of Protest: Japanese Literature from Okinawa, a compilation of literature by Okinawan writers that reflects its complicated historic past.

International Examiner: How does Islands of Protest differ from your previous book, Writing Okinawa: Narrative Acts of Identity and Resistance?

Davinder Bhowmik: Writing Okinawa was a research monograph, but Islands of Protest is a series of translations by a number of different translators. They are selected pieces mostly from the postwar era. So they’re representative works of fiction, poetry and in one case, a drama published in Japan in 1978.

IE: The narrators in this collection are almost all working through the trauma of war or occupation. The work that’s looking forward is about vengeance, or assimilation, as in “Hope,” or “Okinawa! Where will you go now?” Are the possibilities of the future that are laid out representative of Okinawan perspectives in general?

DB: The vengeance one is a bit extreme, but [Medoruma Shun] suggests that there’s a very fixed image that in Okinawa, life is a treasure. It’s the birthplace of Karate, a martial art without weapons. The image of Okinawa is all about nonviolence and what comes with that.

Medoruma, in “Hope,” at least, wrote an imaginative work in which vengeance is taken. It also represents a theme with some people that he’s studied with. These were people that were reading Franz Fanon, likening the situation to what was happening in Algiers, or African Americans in the United States.

Oppression is oppression, and sometimes nonviolence isn’t possible. The reality is, around reversion, most people wanted Japanese sovereignty. It always surprised me, given the prewar extent to which Okinawa had to assimilate, why there was a preponderance of people in Okinawa that wanted to revert.

There was a practice of wearing dialect cards as a punishment for speaking the local language. You wore it until another student slipped. That practice from the 1940s reoccurred in the 1960s when schoolteachers in Okinawa were trying to make Okinawans remember they were Japanese before Americans occupied Okinawa, and they were aspiring to be Japanese again through the reversion to Japanese sovereignty. Which always surprised me, given how much blood was shed during the Battle of Okinawa and all that happened.

IE: If part of the requirement for Okinawan literature is that it’s written in standard Japanese, it sounds like it excludes certain perspectives.

DB: It also allows for a readership. You’ve put your finger on a major issue. In the Meiji period there were all these compromises made to arrive at a “Tokyo broadcaster” standard. In Okinawa, so culturally distant, but probably closest linguistically to the older forms of Japanese, you had the same issues, because for a writer to gain recognition in the modern period, they had to publish in mainland journals, or they’d have to write in a standard.

Everything in the country was being standardized, so in their classrooms [Okinawans] had to learn standard Japanese, which was like a second language.
Standard Japanese was not their native language, but writers had to get skilled to be published. They also had to retain Okinawan-ness. Whether it was for realism, or for other reasons, almost any story I know from the earliest period has the local language. I don’t call it dialect, I call it local language, because [Okinawan and standard Japanese] are as different as French and Italian, [Okinawans] just don’t have the power behind them.

IE: Do you think the use of Okinawan Japanese in literature is changing, in the ways people use it?

DB: It depends on the author. Mike Molasky was part of that Southern Exposure volume. He observed in Medoruma’s earliest works in the 80s, he didn’t gloss [annotate] as many of the local words, because the audience was a more local audience.

There are other times when an author wants to capitalize on the local language, and he throws it in when it’s not necessarily faithful, realistic or natural.

Self-exoticization, is what I’d call it. That’s an excess of language. It really doesn’t correspond to a reality in Okinawa because most people, in daily life, if they’re young, they’re speaking in something close enough to standard Japanese.

There’s accent, and stuff like that, but they’re not speaking predominantly in the local language. That’s no longer the case. Like a lot of dying languages, that’s the state. You have these languages that are spoken by the elderly, or people who work with the elderly, but it’s predominantly used by people involved in revitalizing the language.

IE: There are several narratives in this collection that are driven by women. Men deteriorate in the stories, so women rise up and lead in the vacuum. Why do you think this comes up in Okinawan literature?

DB: I do remember in Writing Okinawa that around the 80s, there were some statistics about divorce. So a lot of Okinawan female writers emerged after that, single mothers and single women. That might be one part of why you see female characters show this kind of strength.

Some look at this literature with a longer view, might point to earlier ideas about community in Okinawa and the difference between early Japanese communities. In early Okinawa you had a matriarchal society. Japan’s supposed origins in mythology were from the sun goddess, but in Okinawa you had women as the central figures responsible for rituals, for ancestor worship and all that. I don’t know how many writers have that big-picture view of an earlier time when women had more symbolic power. I think the modern period shows, as it does in other places, women are often less heard from.

There’s also an issue that’s part of Japanese discourse as a whole, where there are no children. There’s, I think, more people born in Okinawa than in other parts of Japan, because it’s different, because of transportation and housing, maybe there’s more resources for women that have children.

There’s also an interesting phenomenon where lots of people from urban settings are going to less congested areas, for a slower life, they’re going to Okinawa, where it is perceived to be an island life, like Hawaii. It’s not easy. You’ve got to figure out how you’re going to have the money to have a slow life.

IE: Magical realism appears a lot in these stories. The most obvious example is in “Swaying, Swinging,” where a whole fictional society is set up. Is this characteristic of Okinawan literature?

DB: Definitely in Medoruma. Definitely in Sakiyama [Tami]. I haven’t seen reference to magical realism in discussions of their predecessors. I’m hoping there’s some young writers now who are looking for inspiration from them. I wouldn’t go far as to say it’s something specific to Okinawan literature. Strange things happen in island literature as a whole. It’s something I’d have to keep watching.