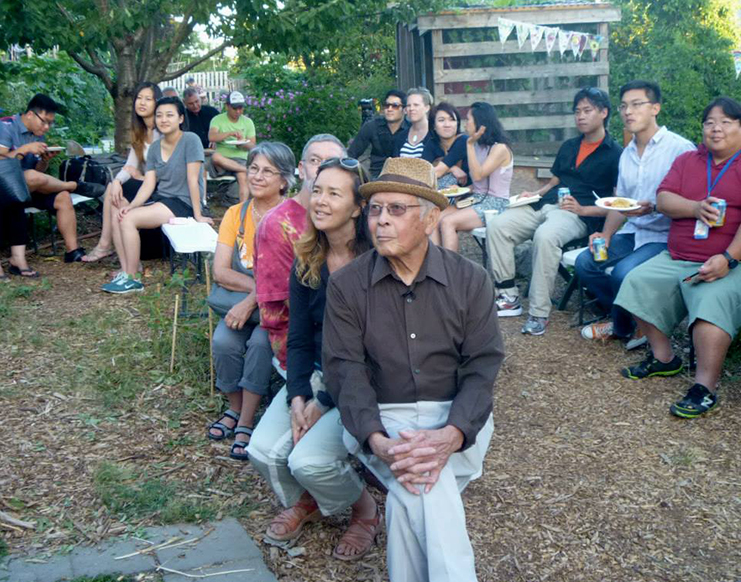 Washington State Representative Sharon Tomiko Santos has been going to the CID’s annual pig roast for as long as she can remember. It’s where she met Uncle Bob, the neighborhood’s “unofficial mayor,” who later became her husband.

Her favorite part? Midnight breakfast while the “hardcore people” continue to turn the pig into the early morning. In the late ‘80s, that’s when she could hang around the folks who originally built the Danny Woo community garden, where the roast is held.

“Some people who were in the blossom of their careers still came back and ate breakfast,” Santos said. “As one of the younger people, it was a way to connect with history.”

Back then, a breakfast of eggs was cooked up by Judge Douglas Luna, a local celebrated chief justice. He has since passed away.

This year would’ve been the 45th annual pig roast, but because of the pandemic, InterIm CDA has decided to cancel. The huge gathering of community elders wouldn’t be safe, says Danny Woo garden manager Lizzy Baskerville.

And while organizers think of potential alternatives to the pig roast, they’re also remembering what the event has meant for the community over the last 45 years.

Frank Irigon, a celebrated activist and community leader, was at the very first pig roasts, back when they were held in Uncle Bob’s backyard. In the ‘70s, Irigon and other young folks didn’t have much experience with pig roasts. But one year they took it upon themselves to catch and kill the pig

“Several of us got into the pen not knowing what to expect. It’s not like they come when you call their name,” Irigon said. “We finally caught one, and we were so proud of ourselves.”

But the slaughter was not as smooth. The way Tom Im, InterIm’s deputy director, remembers it, the pig wasn’t very good that year — the adrenaline, he said, made the meat especially tough. The thought of community activists with little experience running around in a pig pen still makes him laugh.

Before the pig roast moved to the Danny Woo Community Garden (and before the garden even existed), Irigon would hang out in the Woos’ restaurant, talking about video games and organizing protests to preserve the CID. He jokes that organizing and learning the ropes of the pig roast was oftentimes more difficult than protesting.

Then, in 1975, the garden was built with help from community members like Elaine Ishihara. She’s seen it grow into a place where elders can not only grow culturally appropriate food, but can connect with younger generations.

It’s been hard for Ishihara to watch what’s been happening to the CID in recent years. Gentrification has pushed folks out of Central Seattle, the pandemic has hit the neighborhood especially hard, and many celebrated figures, including Uncle Bob and Judge Luna, have passed away. But the Danny Woo Community Garden, she says, remains a symbol of hope.

“It’s just as important to the people who live down here now as it was back then,” Ishihara said. “And the pig roast is an opportunity for people to tell stories. That’s how we share information, at least the older generation, so it’s an opportunity to do that.”

One story that continues through the generations is that of Donnie Chin, a community hero who always manned a first aid station at the roasts, and would walk folks back to their cars. In the ‘60s, when police would often refuse to respond to calls from the CID, Chin helped found a neighborhood emergency center.

“People would call Donnie, and he was the first responder,” said Annie Xuan Clark, a longtime community organizer. “And he basically did it for no money.”

In 2017, Baskerville began organizing the roast. It was the first year without Uncle Bob, and she remembers it being exhausting.

“I hadn’t learned how to delegate tasks yet,” she said, laughing. “I think I stayed up for like 36 hours.”

But by the end of the event, community leaders awarded her the head of the pig — an honor, which includes some of the tastiest parts of the animal.

In recent years, Im says more young activists have been showing up for the community event. It’s a good sign considering the threat of gentrification. Santos has seen the same thing.

“There’s a renaissance of young people who realize what we are losing when downtown interests and corporate interests take over a neighborhood,” Santos said. The pig roast offers the CID a chance to fight back against gentrification, Santos said, “by making sure we place our stake in the ground.”

While some folks have never met Uncle Bob, his memory is everywhere. In InterIM’s conference room, there’s a photo of Uncle Bob smoking a cigar and sporting a bucket hat.

“It’s an iconic picture,” Im said. Above it is written ‘Uncle Bob is watching.’ The photo reminds them to keep fighting for the community and for what he stood for.

“Right now America is so fractured,” Clark, who worked closely with Uncle Bob in the ‘90s, said. “But Bob was so good at bringing different people together.”

According to Baskerville, InterIm is thinking of ways that the CID can celebrate food, community, and culture without a large gathering. Currently, InterIM is focusing on taking care of the elderly residents — delivering groceries, conducting wellness checks, and much more.

And even though the garden is largely empty, Baskerville says there are still signs of resiliency. The garden’s “free box” is one example.

“It looks like a little free library, but for free vegetables,” she said. “We haven’t put anything in there yet, but every day there’s new food that people are putting there for others. Canned food, fresh fruit, which has been really cool to see.”

Santos thinks Uncle Bob would be proud of the sense of caring and compassion still visible in the CID.

“I think he would say that the pig roast may need to be canceled this year, and we’re sad about that…but that we can come back stronger next year.”