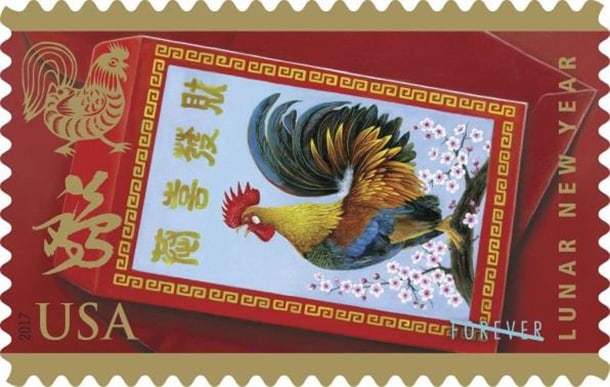 Art director Ethel Kessler worked on the series with illustrator Kam Mak, a Hong Kong-born artist who grew up in New York City’s Chinatown and now lives in Brooklyn. The artwork focuses on some of the common ways the Lunar New Year holiday is celebrated. For the Year of the Rooster, the illustration was originally created using oil paints on panel as a depiction of a colorful rooster emblazoned on a red envelope (hongbao). Parents present red envelopes containing money to children and loved ones during Lunar New Year celebrations. The color red symbolizes luck in Chinese culture, while rooster imagery is often used to ward off evil spirits. The characters at the top of the envelope form a common Chinese greeting of celebration and wish for prosperity and good fortune, used most frequently during Lunar New Year.

The Lunar New Year is celebrated primarily by people of Chinese, Korean, Vietnamese, Tibetan and Mongolian heritage and is the most important holiday of the year for many other Asian communities around the world.