The following is an announcement about the film ‘Never Give Up!’ by Holly Yasui:

November 2 is Day of the Dead in Mexico, and Holly Yasui, co-director of the biographical film, Never Give Up!, about her father, who lives in the very fiesta-prone town of San Miguel de Allende, says that it is not a sad day but a colorful and joyous holiday. Families and institutions build beautiful altars to their deceased loved ones on the Day of the Dead, often opening their doors to the public to share in their homages and celebrations.

So Holly decided to officially inaugurate an online homage and celebration for her late father, Minoru Yasui, on Day of the Dead, to share the work she and her team are doing, and to initiate a fundraising campaign to finish the film.

“I’ve always wanted to make a film about my dad. He was an extraordinary person who stood up to the greatest power in the world, the U.S. government, because he believed with all his heart and soul in the democratic ideals of liberty and justice for all,” Holly said. “And he continued, all his life, to fight for those ideals. He never gave up!”

In 1942, Minoru Yasui initiated a legal test case by deliberately violating military orders that resulted in the imprisonment of 120,000 persons of Japanese ancestry in U.S. concentration camps. He spent 9 months in solitary confinement awaiting the appeal of his case to the U.S. Supreme Court, which ruled against him. But he continued to defend the human and civil rights of all people in Denver, where he relocated after the war. He helped to found and participated in a dizzying number of community organizations, fighting for the human and civil rights of Blacks, Latinos, Native American, religious minorities, immigrants, children and youth, senior citizens, low-income people; also national networks and international exchanges.

In the last years of his life, Min Yasui devoted himself totally to the redress movement, seeking a government apology and reparations for the injustices perpetrated against Japanese Americans during World War II. He reopened his legal case and attended thousands of meetings, made hundreds of speeches, wrote thousands of letters. When he died in 1986, his case was in appeal; when his family took it back up to the U.S. Supreme Court, they refused to hear it in 1987, the bicentennial of the U.S. Constitution, which Yasui had so steadfastly defended all his life. Two years after his death, Congress passed the Civil Liberties Act of 1988, which included a government apology and reparations for all survivors of the U.S. concentration camps.

But many of Min Yasui interviews and speeches were filmed, for national news, local stations and “home movie” recordings. Now, more than 30 years later, only a handful of clips survive; but they speak volumes.

“I’m lucky that my Aunt Yuka, my dad’s favorite ‘baby sister,’ saved hundreds of family photographs and documents – including handwritten letters from jail!” Holly said. “My dad also saved voluminous papers, now held by the Auraria Archives in Denver, Colorado, so I have a wealth of materials I’m using in the film.”

In 1988, Holly’s cousin Lise Yasui produced an Academy Award-winning film, Family Gathering. When Holly asked her about outtakes—footage filmed but not used in the final cut—she came up with an impressive list of materials, but all in old formats, very expensive to transfer to modern media. So Holly used a few clips from the film itself, an interview done in their Aunt Yuka’s kitchen. Lise says of her uncle: “He always insisted that his fight to right the injustices of the 1940s was not an attempt to rewrite the past but to make the future a safe place for human rights and personal dignity.”

Holly also contacted former Utah television news producer Michael Goldfein for permission to use his short piece Citizen Min. Says Goldfein, who is now in Washington DC writing a historical study about government policies toward Japanese Americans during World War II: “The life and legacy of Minoru Yasui is indisputably one of the great stories of heroism in America’s civil rights history. In 1983, as a young reporter, I had the opportunity to tell his story. The trip I took with him, visiting the site of his arrest in Portland and his ultimate internment in Minidoka, was a touchstone moment in my life. Min’s enduring passion for fairness needs to be seen and heard.”

In 1985 Steven Okazaki’s documentary Unfinished Business, about the re-opening of three Japanese American legal cases—Yasui, Hirabayashi and Korematsu—was nominated for an Academy Award. Okazaki interviewed Yasui at his brother’s farm in Hood River. Says Okazaki: “Min Yasui was brilliant, dapper, funny, controversial, and inspiring.  I don’t know of anyone who was so principled, so absolute in his faith in justice, and the necessity to speak up for and live by one’s beliefs. I met him over 30 years ago and was struck by the power of his personality, warmth and decency. I had to smile and wonder if he was real. Thirty years later, I know he was the real thing.”

A former professor at the University of California-San Diego, Jim Lin, contacted Holly through an online magazine. Jim had several videocassettes of Min’s rousing presentations recorded in the spring of 1986, just months before he was diagnosed with cancer, so these are among the last made of the great orator.

In 2014, Holly and Will Doolittle shot interviews in Oregon, California, and Denver with 20 people who knew Min Yasui and/or his work during different periods of his life. Once they started editing, it became apparent the material merited a longer format than the 15-30 minutes originally planned. Thus the decision to raise funds for an hour-long film. They are seeking $50,000 to complete Never Give Up! for 2016 events planned for the centennial of the birth of Min Yasui, as well as a school curriculum about this American hero whose life and work can be an inspiration for generations. 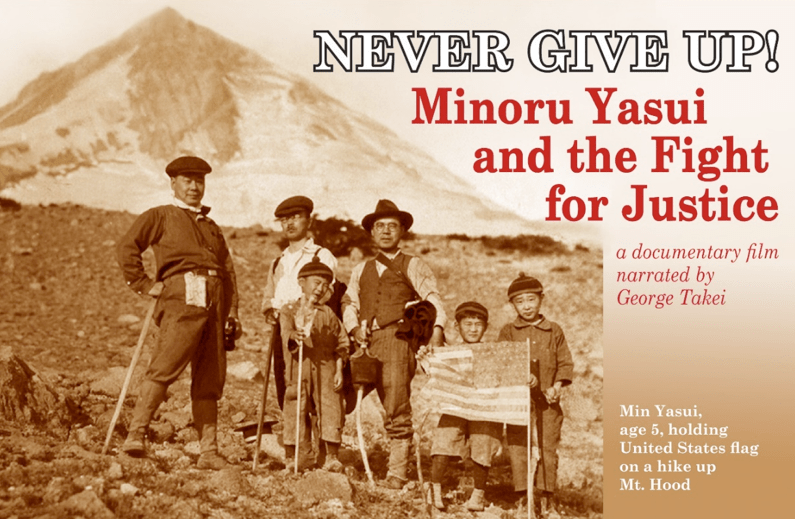