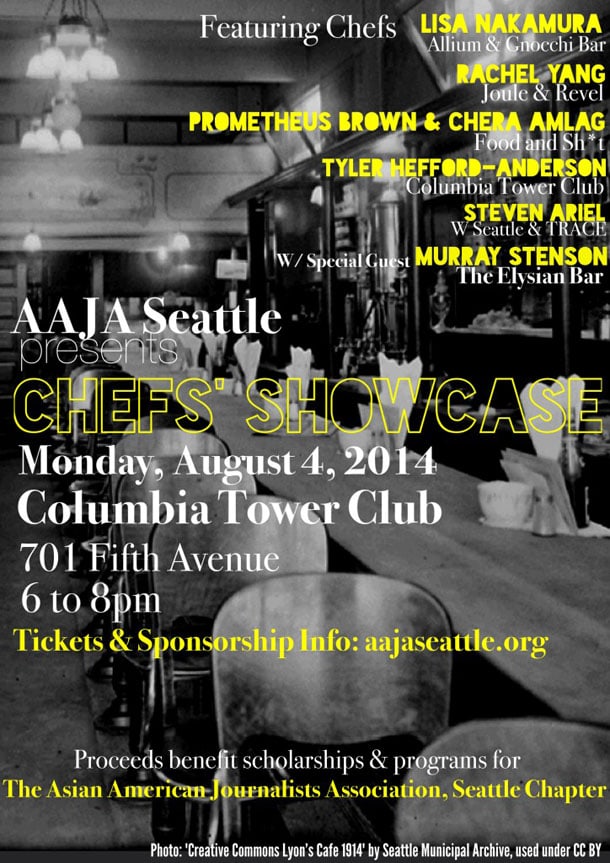 Join the Seattle chapter of the Asian American Journalists Association on August 4 at Columbia Tower Club. Have fun with fellow foodies, network with professionals in the communication industry, and get inspired.

Some of the most exciting chefs working in the Seattle food scene today are donating their time to demonstrate recipes that will be printed in a program book and available for each attendee to take home.

• Tyler Hefford-Anderson, who has shown off his culinary skills at Salish Lodge and Spa and Opal and is now executive chef at the Columbia Tower Club.

• Lisa Nakamura, an alumna of The French Laundry and Allium who has delighted Seattle foodies more recently with her sold-out pop-up gnocchi bars.

• Rachel Yang, a James Beard-nominated chef and co-owner of Joule and Revel restaurants in Seattle.

• Murray Stenson, the legendary mixologist who helped to put Zig Zag Bar and Canon on the map. Voted the Best Bartender in America in 2010, Stenson is now working his magic at The Elysian Bar.

Proceeds from this event benefit AAJA Seattle, which is dedicated to promoting diversity in local newsrooms and fair coverage of Asian Americans in the media.