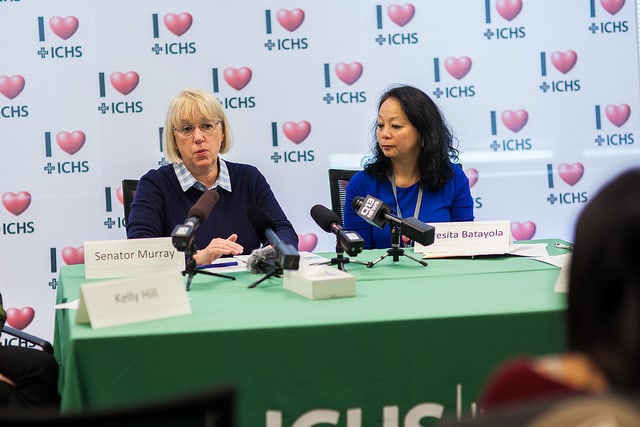 The following is announcement from ICHS:

While age, experience and background differed, patients and health practitioners at International Community Health Services (ICHS) were united in a single, important message today to Sen. Patty Murray (D-WA) – don’t let the Senate take away affordable health care. Murray will head to Washington, D.C., armed with this message and stories from ICHS patients, as she calls on Senate Republicans to end closed-door deliberations in exchange for public hearings on the American Health Care Act.

“Sen. Murray’s advocacy comes at a time when the stakes couldn’t be higher,” said ICHS CEO Teresita Batayola. “Six thousand ICHS patients benefit from expanded Medicaid and an additional 2,200 risk being priced out of insurance coverage if they lose medical subsidies and tax credits.”

During her visit to ICHS, Murray toured facilities, spoke with staff and doctors, and collected opinions and concerns from patients and the local community. Remarks from Batayola and Murray pointed to the progress made under the Affordable Care Act, as well as the high costs of rolling back Medicaid. Batayola also underscored community health centers’ value as part of the national health care safety net; saving taxpayers, on average, $2,371 (24%) in total spending per Medicaid patient, when compared to other providers.

“The concern I heard today in stories from patients at ICHS about how they might lose coverage for life-saving treatment if Trumpcare is enacted was moving and powerful,” said Murray. “The last thing patients and their families should have to worry about is Republicans taking the care they rely on away or forcing them to pay more – and that’s why I’m doing everything I can to make sure their voices are heard in back in Washington, D.C., and fighting to keep Republicans from jamming this harmful bill through.”

“Our message to Congress is – preserve coverage for those currently covered. So many fear the loss of life-saving and the most basic of health care services, including doctor visits, maternity and prenatal care, hospitalization, prescriptions, mental health and ambulance rides,” said Batayola. “We thank Sen. Murray and those like her, who are leading the fight for us in Congress. But we also have a job to do in making sure those who would suffer under the Senate’s ‘in the dark’ health care bill are heard.”

Among those Murray listened to was Douglas Hathaway, a Medicaid recipient with Parkinson’s disease, who said affordable health care was vital to being able to work; and Kelly Hill, a behavioral health worker who sees two sides of the coin in the national health care debate, as her son has special needs that requires costly medical care.

More than 600,000 Washington state residents risk losing health care coverage under the state’s Medicaid program with passage of the American Health Care Act; while another 72,000 to 100,000 risk losing their current private insurance.