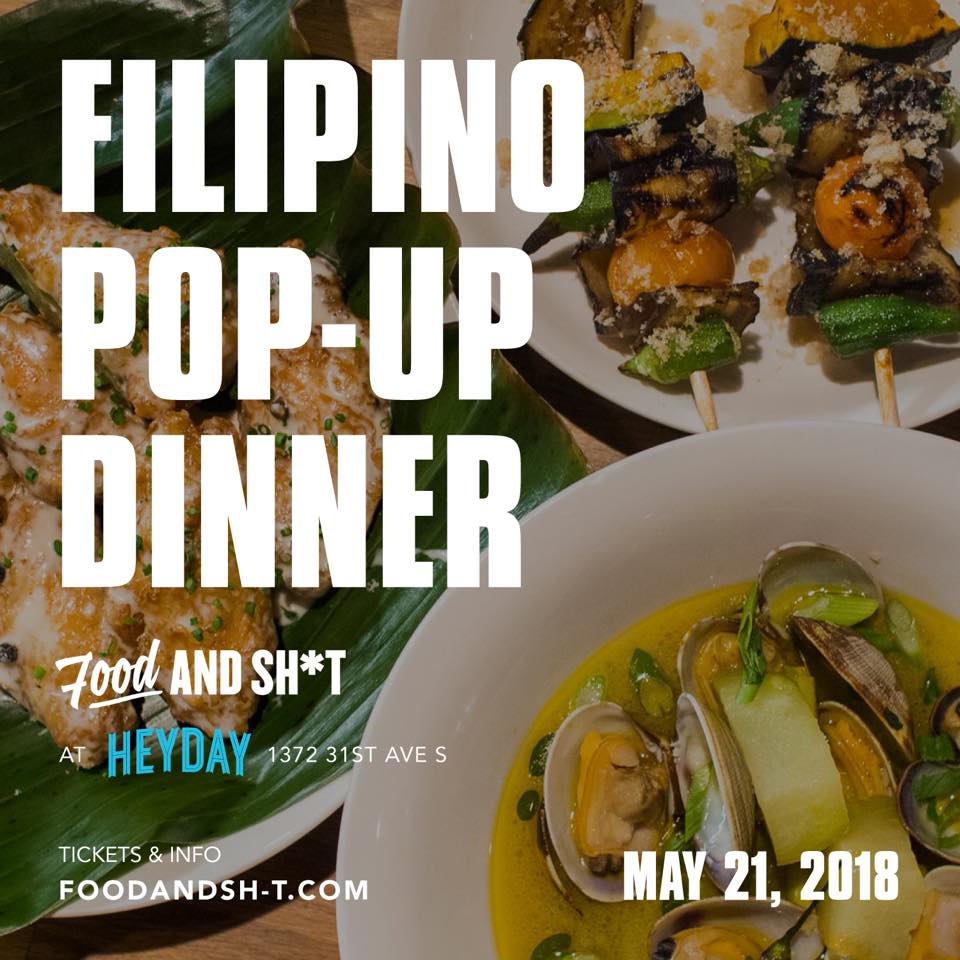 Food & Sh*t, a Seattle-based Filipino pop-up restaurant, is returning from a nearly two-year hiatus to run dinner service hosted at Heyday (1372 31st Ave S) on Monday, May 21, 2018. The dinner will feature a prix-fixe, five-course menu curated by pop-up founders and current Hood Famous Bakeshop owners Chera Amlag and Geo Quibuyen. Advance tickets will go on sale on Monday, May 7, at noon at foodandsh-t.com for two seatings: 5:00 PM and 8:00 PM, limited to 60 tickets per seating.

During its initial run, Food & Sh*t was a pillar of the emerging local pop-up restaurant scene, as well as a key presence in the growing visibility of Filipino cuisine in the U.S. Food & Sh*t ran monthly pop-up events from September 2013 to June 2016 at Inay’s in Beacon Hill and Kraken Congee in Pioneer Square, with a nearly two-year run of consecutive monthly sold-out 100-seat dinner services. With a lively atmosphere often featuring live DJs and performers, each dinner featured a completely new menu with creative takes on Filipino cuisine and it’s intersections with Pacific Northwest food.

Food & Sh*t’s dessert offereings – in particular “Chera’s Hood Famous Ube Cheesecake” – took on a life of their own, and, in response to the increasing demand, Chera and Geo went all-in on cheesecakes and a growing line of original Filipino baked goods and sweets. In 20 months since it’s opening, Hood Famous Bakeshop has become a fixture in Seattle’s desserts scene and a prominent name among a new wave of Filipino eateries nationwide.

Heyday owners, Gary Snyder and Dang Nguyen, are excited about the upcoming pop-up as “a way to help showcase and elevate diverse culinary voices. We also think it’s a great way to introduce Leschi and Mount Baker to food they may not have every tried – and hope it’s the first Heyday pop-up of many!”

Ticket reservations go on sale to the public for $75/seat at noon on Monday, May 7th at foodandsh-t.com.