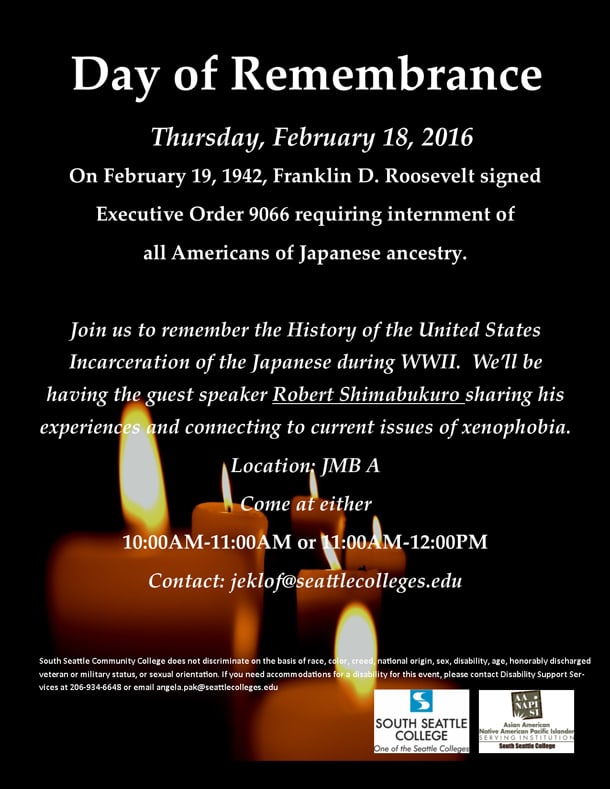 On February 19, 1942, Franklin D. Roosevelt signed Executive Order 9066 requiring internment of all Americans of Japanese ancestry. A Day of Remembrance event will examine the history of the United States Incarceration of the Japanese during World War II.

Guest speaker Robert Shimabukuro will share his experiences and connect them to current issues of xenophobia.

As a writer, columnist, and editor for the Pacific Citizen, International Examiner, and the Retiree Advocate (the newsletter of Puget Sound Advocates for Retirement Action), Shimabukuro has focused on the relationships between family, community, and social/economic justice for a multicultural society. He is the author of Born in Seattle: The Campaign for Japanese American Redress and was the (founding) director of Asian Pacific AIDS Council. Shimabukuro was also a researcher and builder for the groundbreaking 1992 “E.O. 9066: Fifty Years Before and Fifty Years After” exhibit at the Wing Luke Asian Museum.

Paper cranes will be made for the Interim CDA’s Hirabayashi Place, named for Gordon Hirabayashi.

In addition, Seattle Asian American Film Festival will be tabling to share information about their events and the film Empty Chair.