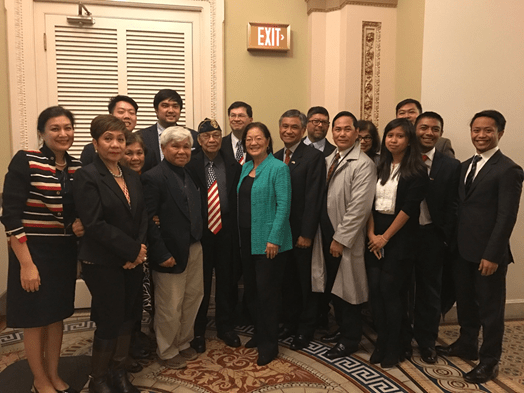 Plans are underway for a national celebration honoring Filipino World War II veterans, whose service and sacrifice have been finally recognized by the U.S. with the passage last year of the Filipino Veterans of World War II Congressional Gold Medal Act of 2015, which is now enshrined as Public Law 114-265.

The Congressional Gold Medal (CGM) is one of the highest civilian awards bestowed by the United States for persons or groups who have performed an achievement that have an impact on American history and culture.  American citizenship is not a requirement. In particular, this award is a public expression of the U.S. Congress’ gratitude on behalf of the nation for the distinguished contributions of 260,000 Filipino soldiers and guerrillas during World War II in the Philippines.

Traditionally, the CGM is formally presented to the awardees by the Speaker of the House.  This year, the national celebration coincides with the formal award presentation of the medal to Filipino World War II veterans by House Speaker Paul Ryan. The presentation has not been scheduled, but could be held as early as October or November of this year.

At the award ceremony, slated to be held on Capitol Hill, surviving Filipino and American veterans or their next-of-kin will receive bronze replicas of the CGM and a framed copy of Public Law 114-265. Expected to attend are Congressional sponsors, Philippine Government officials, Presidential Cabinet members, high ranking general officers from the US Army, US Marine Corps, US Navy, US Air Force, US Coast Guard, veterans advocates, community leaders and supporters and other dignitaries.

The Filipino Veterans Recognition and Education Project (FilVetREP), the proponent of the CGM legislation and the official national point of contact for all CGM activities, is working closely with the U.S. Mint and offices of Sen. Mazie Hirono (D-HI) and Rep. Tulsi Gabbard (D-HI) to accelerate completion of the CGM’s minting and production of at least 500 bronze replicas.  FilVetREP is led by Maj. Gen. Antonio Taguba (U.S.A. Ret.) and his executive team composed of Marie Blanco, Erick Soriano, Jon Melegrito and Ben de Guzman.

Bronze replicas will be awarded only to surviving veterans or their next-of-kin whose eligibility for CGM has been vetted and whose names are included in FilVetREP’s national veterans registry.

Applications and instructions for submission may be downloaded from FilVetREP’s website, www.filvetrep.org. Each of the FILVETREP regional directors are responsible for contacting the veterans and families to help them register.   Bronze replicas are not funded by the U.S. government, but rather by donations from the public.  Donations to support FilVetREP’s CGM activities are accepted through the FilVetREP website.

The next phase of the CGM project is to create a digital exhibition and education program that will be accessible to public schools and the public. It will include a complete history of the Filipino veterans’ role in World War II, timelines, testimonies, personal stories, photographs, videos and other artifacts.

The Filipino Veterans Recognition and Education Project is a nonpartisan, community-based, all-volunteer nonprofit organization whose mission is to raise awareness through academic research and public information for, and obtain national recognition of, Filipino and Filipino-American World War II soldiers in the United States and the Philippines for their wartime service to the U.S. and the Philippines from July 1941 to December 1946,  It was organized as a nonstock, nonprofit corporation under the laws of the Commonwealth of Virginia, and is a 501(c)(3) tax-exempt public charity under IRS regulations.