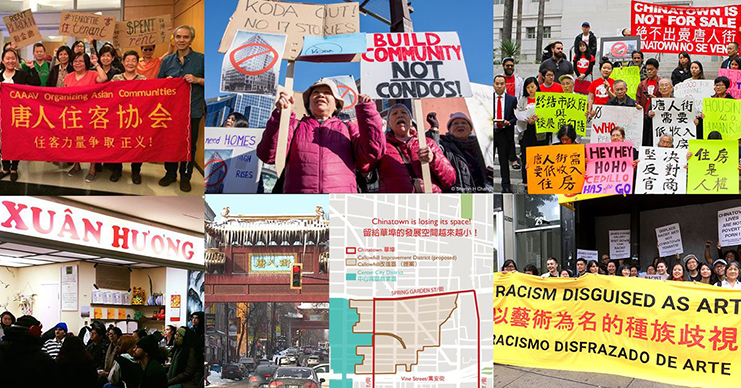 The following is a press release from the Coast to Coast Chinatown Solidarity Network:

Seattle, Washington—Starting on May 25th, Chinatowns across the United States and Canada will kick off a week of action against gentrification and displacement threatening to erase these vibrant and  historic communities. During Asian Pacific American Heritage Month, Chinatowns in Seattle, Los Angeles, Philadelphia, New York City, Montreal, Toronto, San Francisco, and Boston will organize rallies, public art actions, gentrification tours, and petitions to mobilize tenants, call for moratoria on luxury development, and demand local elected officials work with impacted communities to stop the displacement crisis.

This week of action calls attention to record levels of profit-driven development and gentrification accelerating the displacement of longtime residents—Asians of all ethnicities, as well as Black, Indigenous, and other people of color—who rely on Chinatowns for low-income housing, culturally-competent social services, and community.  In the United States, median rents in Asian and Pacific Islander neighborhoods increased by 74 percent between 2000 and 2014, compared to a national median increase of 53 percent.

“This is a crisis that crosses borders, communities, and race, and that’s why it’s so important for us to come together and say no more,” said Tiffany (TiDo) Do of the Chinatown Community for Equitable Development in Los Angeles. “Displacement is an urgent problem not only for Asian and Pacific Islander communities, but for the Indigenous people on whose lands Chinatowns were built. For the immigrants, laborers and communities of color who also call these  neighborhoods home. As Chinatowns become increasingly coveted by private developers, we’re seeing more residents, social services, and mom & pop businesses pushed out by luxury real estate and rising rents.”

Members of the Coast to Coast Chinatown Solidarity Network, who are organizing the week of action, believe not enough is being done to prevent the permanent erasure of North America’s Chinatowns. “The legacy of cultural preservation and self-determination our communities fought so hard to achieve over the last 150 years is something that should be honored and protected,” said Jacqueline Wu, a member of Seattle’s Chinatown-International District Coalition. “But no one at city hall seems to value that history over the developers’ bottom line. They’re not listening to Chinatown communities.”

The week of action is deeply rooted in the histories of racial violence—and community resistance—that have shaped Chinatowns over time. “These neighborhoods are the result of over a century of violent expulsions, redlining, city neglect, and other exclusionary policies deliberately designed to marginalize Asian Americans, Indigenous peoples, and other communities of color,” said Tomie Arai, a member of New York’s Chinatown Art Brigade. “We had to organize and fight for our community to survive,” added eighty-two year old Amy Ma, an activist in Chinatown Los Angeles since the 1970s. “No one else was going to do it for us. The only way we will win is if we speak up, amplify our demands, and unite.”

The Week of Action Against Displacement, taking place May 25th to June 1st, will highlight stories of resistance to eviction, exclusion, and cultural loss eroding Chinatowns, and draw connections to other communities facing housing insecurity and gentrification. “Chinatown is more than an aesthetic,” said Wu. “The people are the heart and soul of these neighborhoods, and if you uproot them you destroy an entire community. We’re not going to sit idly by and watch that happen.”

Locally, On May 25, Humbows Not Hotels, along with members of New York’s Chinatown Art Brigade 唐人街藝術隊／ 唐人街艺术队 and anti-displacement organizers from the South End will be speaking at a community event at the Wing Luke Museum. CAB will then do light projections in the CID and the South End. On May 27 there will be a guided walking tour of the CID, highlighting displacement concerns and the neighborhood’s history of displacement and community resistance, and on May 31 there will be a rally and march against gentrification/displacement in the CID. More details in the Facebook event page.

About the Coast to Coast Chinatown Solidarity Network