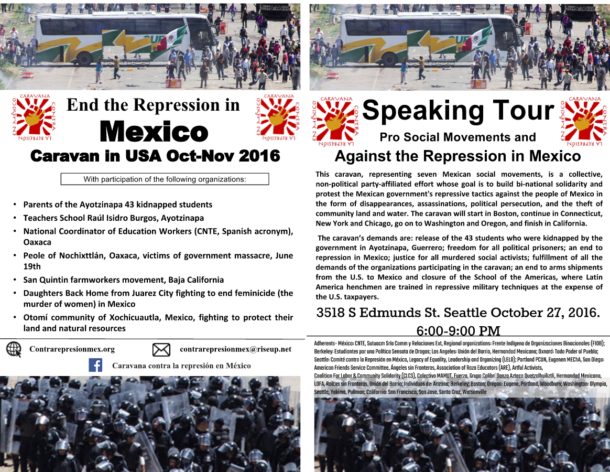 The following announcement is from Caravan Against the Repression in Mexico:

Caravan Against the Repression in Mexico

With participation of the following Mexican organizations:

This caravan, representing seven Mexican social movements, is a collective, non-political party-affiliated effort whose goal is to build bi-national solidarity and protest the Mexican government’s repressive tactics against the people of Mexico in the form of disappearances, assassinations, political persecution, and the theft of community land and water. The caravan will start in Boston, continue in Connecticut, New York and Chicago, go on to Washington and Oregon, and finish in California.

The caravan’s demands are: release of the 43 students who were kidnapped by the government in Ayotzinapa, Guerrero; freedom for all political prisoners; an end to repression in Mexico; justice for all murdered social activists; fulfillment of all the demands of the organizations participating in the caravan; an end to arms shipments from the U.S. to Mexico and closure of the School of the Americas, where Latin America henchmen are trained in repressive military techniques at the expense of the U.S. taxpayers.