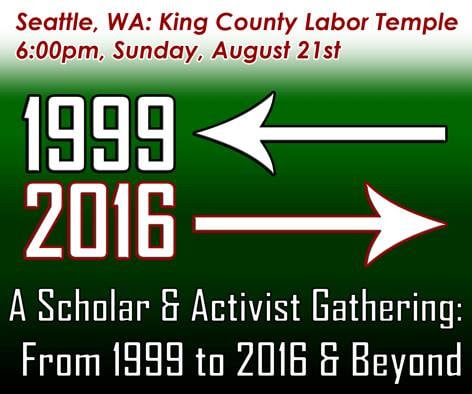 The period of struggle begun in the early 1990s and sometimes symbolized by the 1999 Seattle WTO protests has not only continued, but expanded and flowed into other currents of social change, producing in recent years the movements to abolish corporate personhood, the Wisconsin Uprising, Occupy Wall Street and the Occupy movement, and the Dreamers, and most recently, Black Lives Matter and various interventions in the 2016 elections.

What might an examination of the movements of the past two decades teach us about the needs of activists and social change scholars in the coming years? Join us at 6pm on Sunday, August 21st, at the King County Labor Temple (2800 1st Ave #140, Seattle, WA 98121) for an activist-scholar gathering. We’re bringing participants in the annual meetings of the American Sociological Association (ASA) and Society for the Study of Social Problems (SSSP) together with community activists who have particularly useful personal perspectives on the needs and trajectories of social change work in 21st century American society. This event is free and open; we’ll just pass the hat to cover room rental and other costs.

The discussion is featured with regional scholars and activists like Domingo, David Cobb, Heather Day, Rosalinda Guillen, together with Rose Brewe, Gregory Maney, Ben Manski, and Charlotte Ryan, from 6:00 to 8:00pm, followed by socializing on-site.