Her namesake store is her spacious Honolulu showroom boutique, which includes a workroom where her designs are created. But you don’t have to fly to Honolulu to find Anne Namba originals. Anne stages “trunk shows,” where she personally brings her extensive collection to cities on the continental United States several times a year. She visited Seattle at the Japanese Cultural and Community Center of Washington (JCCCW) in 2013 with her newly designed ready-to-wear separates made from soft, silky bamboo fabric (prints designed by Anne’s nephew) along with her trademark one-of-a-kind pricier garments made from silk kimono and obi sashes. The key to her success is the niche she’s created in the fashion market as a designer independent of the fashion trends. Her pieces are stylish and ultra modern, yet timeless in her use of Asian influences for her designs.

During Anne’s trunk show in Seattle a constant flow of women trickled in all day to the JCCCW gallery to meet the designer and to admire the beautifully designed clothes. Their biggest surprise was how well the clothes fit, how nicely cut and flattering the contemporary designs were regardless of figure type. Her customers walked away with treasured pieces, seemingly made specially for them.

It takes technical skill and a trained artistic eye to execute the type of designs Anne Namba has built her fashion business on. Anne’s attention to fit and creative use of combining various kimono prints together into one garment didn’t happen overnight. What began as a childhood hobby of sewing using her grandmother’s leftover fabrics had developed into a successful life-long career. The first outfit she made when she was a middle school student was anything but wearable, but her savvy mother instantly saw potential in Anne’s efforts and afterwards sought out sewing lessons for her daughter. By the time Anne was in high school, she started constructing clothes for herself using her grandmother’s old, heavy duty treadle sewing machine. The motivation to create clothes had more to do with dispelling the reputation of wearing her older sister’s hand-me-downs than simply her love of sewing. These new clothes she made for herself were an instant hit amongst her high school peers and prompted her to rent out her newly made creations to her sister and friends, foreshadowing her future as a fashion entrepreneur.

Anne’s family embraced her creativity and supported her decision to move to New York City to study fashion design at the Fashion Institute of Technology. After graduating from FIT with honors she honed her patternmaking and designing skills for several years while working for various manufacturers in New York. The highlight of her career at that time was working in the costume department at the Radio City Music Hall. Finding it nearly impossible to break into costuming in New York and Los Angeles, Anne returned home in 1985 to Honolulu to work for Hawai‘i’s largest apparel manufacturing company, Malahini Hawai‘i. A few years later Anne started her own design business, producing one of a kind pieces from vintage kimono fabrics, which grew to include her ready to wear line. She recently added her custom bridal division.

Anne’s dream to design costumes was finally realized in 2009, when she was commissioned to create 120 costumes for the Savonlinna Opera Festival production of Madama Butterfly in Finland. In 2010 Anne created another set of Madama Butterfly costumes, this time for the Malmo Opera in Sweden. She was also commissioned to design opera costumes for The Mikado and Turandot for the Hawai‘i Opera Theatre.

Seattleites look forward to Anne’s return this year with her new bamboo collection and her kimono silk one-of-a-kind creations. Meanwhile, local boutique Momo will have on hand a few pieces from Anne Namba’s bamboo ready-to-wear line.

Designer Anne Namba will be present at “Fashion Fête: Marketplace and Runway show” on August 17 where designs by Namba and other top Asian and Asian American fashion designers will be on display. The event happens at Seattle Keiro Garden on Sunday, August 17 at 3:00 p.m. For tickets and more information, visit www.nikkeiconcerns.org. 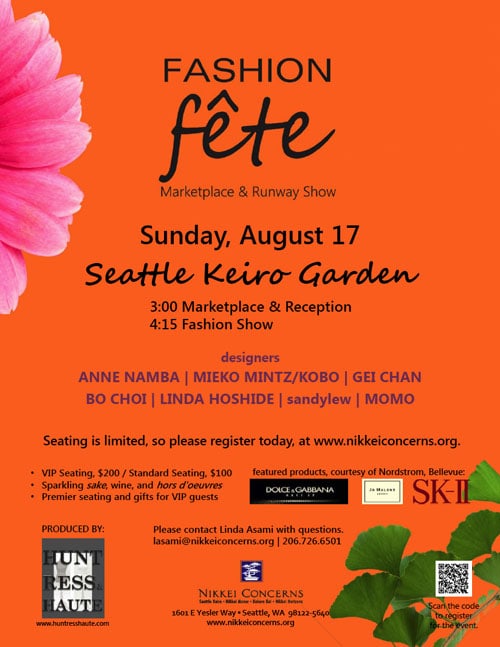