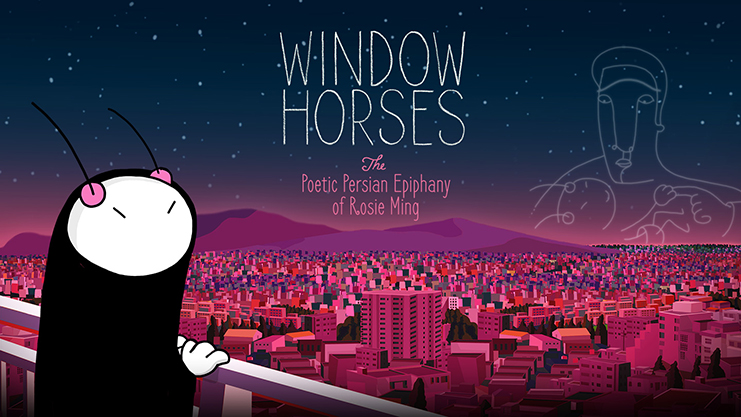 Ann Marie Fleming – producer, director and writer of Window Horses: The Poetic Persian Epiphany of Rosie Ming – put together a feature-length animated film that remarkably encapsulates her insights and experiences gained over the past few decades in a mere 90 minutes. Even the design of her main character, a stick figure she calls Stickgirl, has been around for over 30 years, starting from the time she studied animation in art school.
During her second year, Fleming miraculously survived being hit by two cars and was confined to a wheelchair. Refusing to quit school, she spent an hour each day to draw the story of her life, creating Stickgirl to represent her. The simple lines and shapes that make up Stickgirl personified the lack of physical strength she had at the time.

Now Stickgirl is her avatar and muse, and over the years, Stickgirl has starred in a number of Fleming’s projects. Window Horses is her first time starring in a feature film, voiced by someone other than Fleming. In fact, Stickgirl has the honor of being voiced by Sandra Oh, whose involvement in the film gave the movie the boost it needed to garner the attention of other actors and the general public, allowing Fleming to get the funding she needed to launch the film off the ground.

Window Horses is a movie that, at its core, celebrates differences. It encourages people to open up and share their experiences and wisdom to bridge misunderstanding. It promotes empathy by listening to others instead of unfairly judging them. Fleming shows that hardship can be understood on a universal level, and that sharing our experiences can help others understand their own journey through life. This movie attempts to show through its beautiful imagery, artistry and eloquence, that human emotions are also universal, and despite our physical differences, our ability to relate to each other makes us all one and the same. It also demonstrates how art in its various forms is vital to human existence since it helps people attain peace and closure during hard times.

Released in 2016, Window Horses won the Best Animated Feature category in the 2017 Asia Screen Pacific Awards, beating out stiff competition from the likes of Japanese powerhouse films Your Name and A Silent Voice.

Around twenty years ago, Fleming got the opportunity to go to an artist’s residency called the Akademie Schloss Solitude in Stuttgart, Germany. Although she had a difficult time adjusting to the country, she was delighted to be exposed to artists from all over the world who shared their stories related to exile, migration and homeland. Having a rather complicated background herself, she was naturally interested in stories about diaspora and eagerly listened to the stories afforded to her from artists all over the world during her time abroad.

Fleming was born in Okinawa to Chinese and Australian parents. She later immigrated and obtained Canadian citizenship. Having struggled with her own identity for a long time, it wasn’t until she came to Germany and experienced the difficulty of adapting that she realized she identified as a west-coast Canadian. Her struggles in Germany subsequently lead to her interest in ideas related to translation and adaptation.

Fleming initially had internal conflicts about living in Germany because of her family’s negative experiences during World War II, but as she listened to stories from Germans about the post-war experience, she made amends with them. She also came to the surprising conclusion that many people she talked to were reluctant about sharing their stories with the next generation. From these stories, she wanted to create a film about overcoming misunderstandings that resulted from cross-generational divides in language and culture.

Although the story initially had a German-Canadian focus, this changed after she returned to Vancouver and started getting acquainted with members of the Iranian community. As she listened to the experience of Iranian immigrants, she noticed similarities in their stories with the artists in Germany, and her story evolved to have an Iranian-Chinese-Canadian focus instead. After researching poetry in Iran, Fleming was delighted to see that, like China, Iran had a long history of poetry that crossed generations over millennia. She wanted to use poetry in her narrative as a way of bridging the divide between generations.

Rosie Ming is a Chinese-Canadian girl who lives with her grandparents in Vancouver, British Columbia. She has a part-time job as a fast-food clerk and has one close friend named Kelly (Ellen Page). Secretly, she likes to write poetry and decides to self-publish her poems.

Rosie and her grandmother are both Francophiles, but subtle hints at the beginning of the film show that France is a replacement for another country she harbored interest in that will come back to haunt her in the form of a sudden and unexpected invitation to the First Annual Shiraz International Poetry Festival in Iran. Her sheltered and secluded life disrupted, she resolutely decides to go. Although her grandparents were initially reluctant and skeptical about her going to Iran, they give her their blessing anyway, giving Rosie the freedom to start her first independent adventure outside of Vancouver.

From the moment she steps off the plane, Rosie tries too hard to fit in with the culture and inevitably stands out as a foreigner. She gets introduced to Dietmar Langweilig (Don McKellar), a German poet from France whose arrogance lends her to believe that he knows everything about poetry and Iran. Having left her phone on the plane, she is forced to experience and immerse herself in the country, unaided and uninhibited by Western influence and technology, which increases her feelings of insecurity, inadequacy and impropriety. Intimidated by the talent surrounding her, she questions her own qualification for being invited.

As she awkwardly settles into Iran by committing social gaffes and cultural foibles, she is introduced to many friendly and interesting people, such as Didi (Jun Zhu), a Chinese poet exiled from his country, and Mehrnaz Filsoof (Shohreh Aghdashloo), a poet and historian who takes an instant liking to Rosie and takes her under her wing. Mehrnaz’s support and guidance becomes crucial when Rosie discovers the father she believed to have abandoned her when she was seven, right before her mother’s death, lives in Shiraz, opening up a Pandora’s box of pain, bitterness and disappointment. As people from her father’s life approach her and tell her about him, her memories and feelings about him become conflicted as she assesses the new information.

A challenge is given to her by Didi, who gives her one of his poems to interpret, translate, improvise and perform. As Rosie explores her newfound culture from the bottom up, she starts to gain a better understanding of herself, her grandparents and her father. Through it all, she gains more confidence as her uncertainty clears, preparing her to transform Didi’s poem into something entirely of her own creation and constructed with her newfound voice.

Window Horses will show at SIFF Cinema Uptown on Sat., Mar. 30 at 11:00 AM. Coffee and doughnuts will be served. There will be a discussion about the thematic elements of the film and how they apply to the audience on a cultural level.