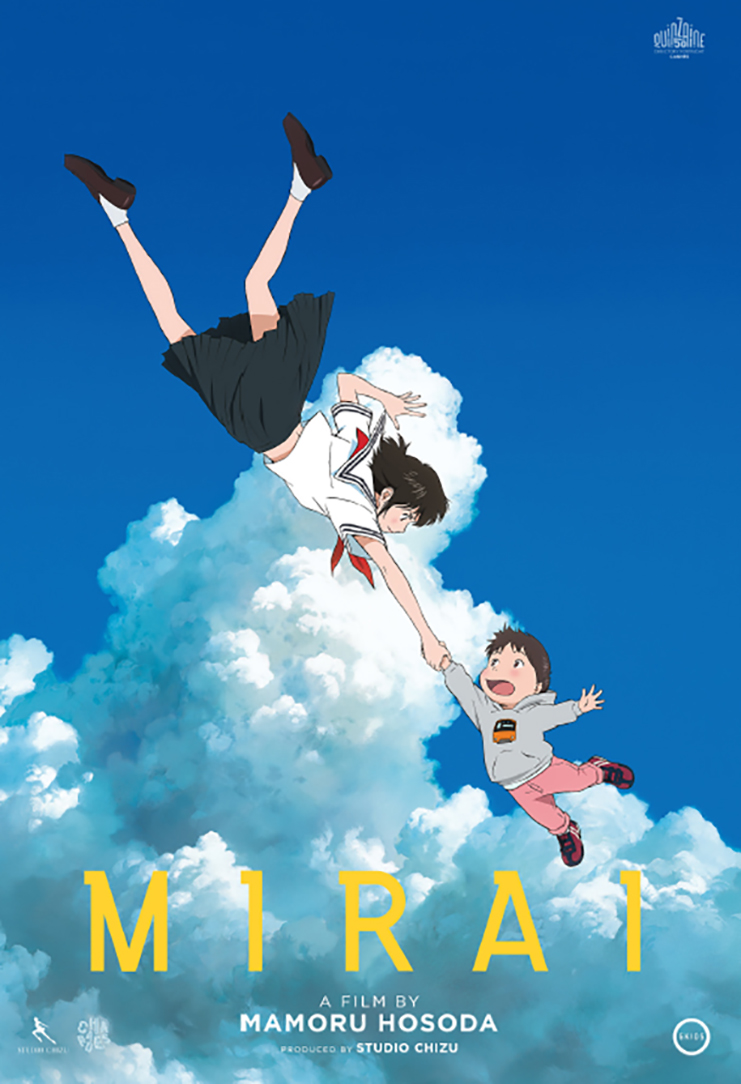 Mamoru Hosoda, the director of several acclaimed Japanese animated films such as The Girl Who Leapt Through Time, Wolf Children and The Boy and the Beast, has released a new film that will please both parents and children alike as it explores life through the eyes of a four-year-old boy. Inspired by his own experiences as a father, Hosoda attempts to make universal statements about life, family and relationships as his young protagonist, Kun, struggles to grapple with the intrusive changes that have been forced upon his life with the arrival of his baby sister, Mirai, which means “future.”

Although the audience for the film seems to be aimed primarily at families with young children, don’t be fooled: This movie will have the adults smiling and nodding their heads as they are reminded of their own life experiences, and the children will laugh while viscerally experiencing the emotional joyride Kun undergoes. Although the film may feel a little slow for adults in the beginning, they will soon get caught up with the intriguing experiences Kun encounters through the family’s magical garden.

The story opens with Kun eagerly awaiting the arrival of his parents and newborn baby sister at home with his grandmother and Yukko, the family dog. Although initially fascinated by this new addition to the family, his excitement is soon quashed the following morning when his mother pays no attention to his demands as she tries to stay awake while breastfeeding his sister. Even though his father, an architect who decided to work at home and be a stay-at-home dad, frantically and clumsily attends to his needs, Kun rejects his overtures and is disgruntled by his father who serves as a less than ideal substitution for his mother.

These changes could all be taken in stride if playing with his sister was worthwhile, but his dreams of taking her outside and teaching her the names of bugs and identifying what clouds look like come to a crashing halt when his mother informs him that he can’t take her outside until she gets older. His enthusiasm deflated, he picks out a book called “The Hag and the Beard Man,” which incorporates his love of trains, and tries to entertain her using his toy trains as props, but this is quickly discouraged by his mother who scolds him for preventing Mirai from sleeping.

As his mother spends the rest of her remaining month of maternity leave teaching her husband how to do the housework properly and giving him pointers on how to care for the baby, Kun finds himself being completely ignored. As a way of venting his frustrations, he starts to torment Mirai by stretching out her face while she is sleeping and hitting her with his toy trains. Although he had promised his mother he would “be nice to her” and “protect her,” his growing grievances prevents him from keeping this promise since he does not like her, and he refuses to acknowledge he is her older brother.

At the height of one of his tantrums, he escapes to the family’s garden. To his surprise, it had transformed into an ancient structure overgrown with wildlife. He is met by a mysterious and somewhat shaggy man who identifies himself as “the prince of this house.” Just as the audience may start to wonder if this is the start of some ghost story, the mysterious person starts to describe his plight, making it clear that this man is actually Yukko. Through the dog’s eyes (almost quite literally), Kun begins to understand that Yukko had experienced similar feelings when Kun was first brought to their home.

Thus begins Kun’s journey of self-discovery as his self-absorbed, small world starts to expand with the introduction of “new” people from the past, present and future all through the help of the magical garden: He meets his sister from the future, his mother when she was his age, his great-grandfather and even himself from the future. All arrive during critical moments of distress in his young life, and he comes away having expanded his understanding and appreciation for the people in his family as he realizes he would not exist if it were not for all the circumstances his family members underwent and experienced to lead to his birth.

Although the film mainly documents Kun’s journey, it also shows his parents’ journey as they struggle to attain some balance while juggling work, kids and home life. The audience is able to see them in their most vulnerable states as tempers flare, patience is lost and senses are overwhelmed. Perhaps it is Hosoda’s way of letting kids take a peek at what their parents might have to go through on a day-to-day basis.

Mirai is the perfect family movie that could be enjoyed by both parents and children alike, perhaps even with family pets. It is a movie that many people could relate to with its broad messages on life and relationships, despite being a movie about a small Japanese family. The animation itself is not as impressive as the works of Hayao Miyazaki or Makoto Shinkai, but still captivating and beautiful with intriguing CG animation sequences for more fantasy-type scenes. Mirai celebrates the people, seen and unseen, that make up a person’s existence and the effects they have on each other to create an unforeseen future.

Intrigued? Check local listings for showtimes. Mirai will be shown in participating theaters on Nov. 29, Dec. 5 and Dec. 8.