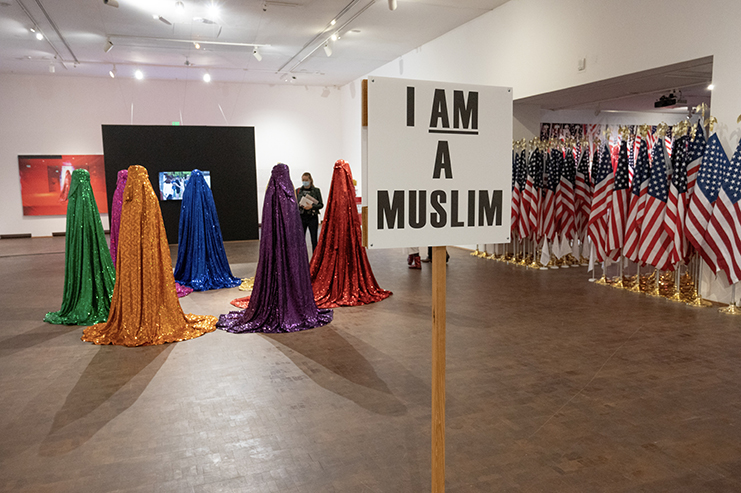 The Red Chador: Genesis I is an in-person exhibition at the Western Gallery (located at Western Washington University’s campus, on unceded Nooksack and Lummi land) which is currently open to the public with COVID safety requirements until November 20th, 2021. Anida Yoeu Ali, who teaches in Interdisciplinary Arts, Performance, and Global Studies at UW Bothell, is a well-known and influential international artist, performer, and global agitator, based in the Seattle-Tacoma area.

Ali’s performance and installation work opens up layers of artistic, personal, political, and spiritual encounters, notably through public performance. The Red Chador: Genesis I celebrates transnational identities and breaks apart misrepresentations of Muslim women and the haunting impacts of Islamophobia. Dressed in a red sequin chador, Ali has moved through public places in cities across the world, challenging the public’s fears of the Other. Here, Ali is both hypervisible and hyperinvisible. Who will speak to her? Who will stare at her?  Who will ignore her? Ali calls upon the public to consider these questions: “If you encounter The Red Chador, would you fear her or walk with her? Would you help her across the terrain, or would you block her path? Would you take a moment to notice her? Would you care at all?”

The scope and scale of Ali’s solo show at Western Gallery is immersive and viscerally powerful. The exhibit moves through sculptures, video projections, photographs, and community reflection. Upon entering, the sequined and brightly colored chadoras are centered in the room, with each encounter these women experienced echoing outward. The opening night, on October 7th, was well attended with Ali performing at 5pm. As she walked around the gallery space in the red chador, the space resonated with emotive energy. Silently, Ali held out her arms to her heart and I did the same. At one point, I saw Ali skateboarding with a few students in the space.

Curator Tami Landis speaks to the power of the exhibit on campus: “Ali’s multi-dimensional installation has immersed our community into profound, challenging and pressing topics related to the body, religion, racism and transglobal identities. At an academic institution this work pushes our students into fears or stereotypes that they have likely never worked through.” Indeed, the exhibition is showing on a campus where only 28.6% of students identify as students of color. One student of color spoke about how the show felt viscerally familiar, as they spoke about how their heart began to race viewing pieces such as Bus Stop, The Red Chador (Nov. 2015, Hartford, USA, photo by Pablo Delano), in which a white man stares directly at Anida, almost touching her. Throughout the show, each piece resonates with fear and the threat of violence, alongside community and resilience in pieces such as Water Birth: The Red Chador: Genesis I (2019, Honolulu, photo by Masahiro Saugano).

The history behind this particular exhibition is significant. This show is a reimagined continuation of its 2015 iteration, which was a 12-hour performance at the Palais de Tokyo in Paris, in response to the Charlie Hebdo killings and Islamophobic media headlines. In 2017, in route to a performance in Ramallah, Ali was informed that the Red Chador never made it out of Tel Aviv. In 2019, she resurrected this project as an act of resistance against loss and censorship. The Red Chador: Genesis I at the Western Gallery is the first public solo exhibition of the series since the disappearance of the original garment at the Ben Gurion Airport in Tel Aviv.

Most recently, I watched Ali’s “Swallowing Silence” talk alongside Erin Shigaki and Ploi Pirapokin, on power and censorship in the arts. I kept coming back to Ali’s comments toward the latter half of this talk, in which she repeats “give us respect.” Moving through the Western Gallery and Ali’s show, I felt that demand for respect – deep, vast respect – rise up and up. This is a show not to be missed.

For more details on visiting Western Gallery, including COVID-19 protocols and hours: https://westerngallery.wwu.edu/red-chador-genesis-i-anida-yoeu-ali