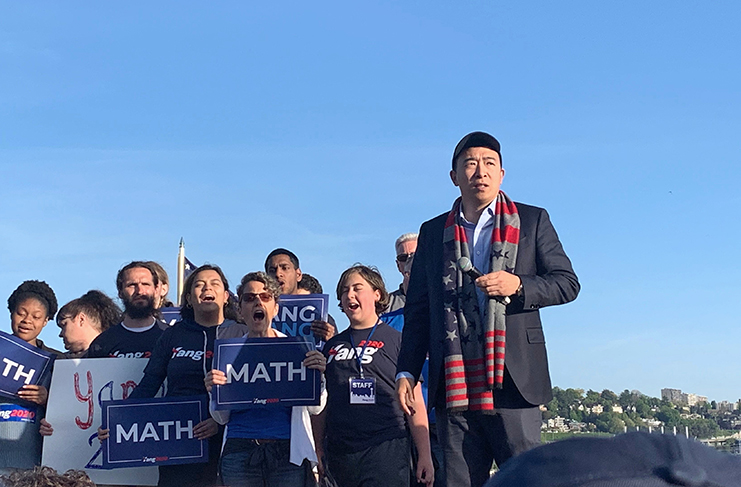 Andrew Yang, a 44-year-old son of Taiwanese immigrants from New York, brought his Democratic presidential candidacy and its foundational push for a universal basic income to Seattle’s Gasworks Park May 3. The Friday evening rally drew about 1,000 people, according to the Seattle Times.

“It would make you all stronger, healthier, mentally healthier, would improve your relationships, would help create a path for you do more of the work that you want to do,” Yang said of his $1,000 a month proposal for all U.S. adults which he calls the “Freedom Dividend.” “This is a human-centered trickle-up economy from people, families, and communities up, and that’s what we can make a reality.”

Yang’s outsider candidacy has been surprisingly competitive given his lack of political experience, but his early entrance into the race in November 2017, combined with his ability to go viral online, have made him increasingly viable as he has hit both the donor and poll threshold for participating in the Democratic primary debates. Meanwhile, more conventional candidates, including Washington Gov. Jay Inslee, have still fallen short of one or both of the benchmarks.

Real Clear Politics’ polling average from Apr. 11 to 29 has Yang at 1 percent, ahead of Inslee and a number of other mainstream candidates, such as New York Sen. Kirsten Gillibrand.

Yang, who studied economics and political science at Brown University and studied law at Yale, founded Venture for America to help create jobs in the Midwest by training people to work at startup companies.

Yang said the three most important policies he would push as president are the Freedom Dividend, a public option for health care, and creating a more human-centered economy.

He would be the first to tell you that a universal basic income is far from a new proposal. Yang noted in his speech that revolutionary Thomas Paine and Martin Luther King Jr. favored the concept. Legislation to implement such a proposal passed the U.S. House of Representatives in 1970, but it stalled in the Senate.

He mentioned Alaska’s in a call-and-response portion of the event as a state that has long used an annual dividend for its citizens funded by revenues from oil. The question of how to pay for this major proposal is a big one and Yang has floated a value-added tax on goods or services a business produces.

Yang has also grabbed headlines for other controversial ideas, such as his opposition to circumcision. Meanwhile, he also would push for fundamental changes to the political system through an 18-year term limit for U.S. Supreme Court justices and lowering the voting age to 16.

The 44-year-old New York tech entrepreneur spent much of the early part of his speech excoriating the automation that has killed manufacturing jobs in the Rust Belt and, in his estimation, will devastate retail and other industries.

“We are in the third inning of the greatest economic and technological transformation in the history of our country, it’s called the fourth industrial revolution,” he said. “Donald Trump is a symptom, he’s not the disease. It is not immigrants that are causing these problems throughout our country and economy. It is technology.”

Yang, who says he was once a corporate attorney, called out establishment Democrats and Republicans generally for not understanding how new technologies are changing the American economy and Amazon for paying zero dollars in federal taxes.

At one point, Yang, known for his obsession with data, said he would be the first president to use a PowerPoint presentation in his State of the Union address, which led to chants of “PowerPoint! PowerPoint!”

“This is the nerdiest presidential campaign in history,” Yang responded. “We did it Seattle.”

Noticing that the animating issue for likely Democratic voters is beating President Donald Trump, Yang, whose parents immigrated from Taiwan in the 1960s and met in grad school, tried to paint himself as the anti-Trump.

“His solutions are to build a wall, to turn back the clock, to bring the jobs back and we need to do the opposite of those things,” Yang said, closing his speech. “We need to turn the clock forward. We need to accelerate our society and our economy. And I’m the man for that job because the opposite of Donald Trump is an Asian man who likes math.”

The crowd, many of them holding signs or wearing hats that simply said “Math” (“Make America Think Harder”), were shouting along with Yang by the end of his trademark call.