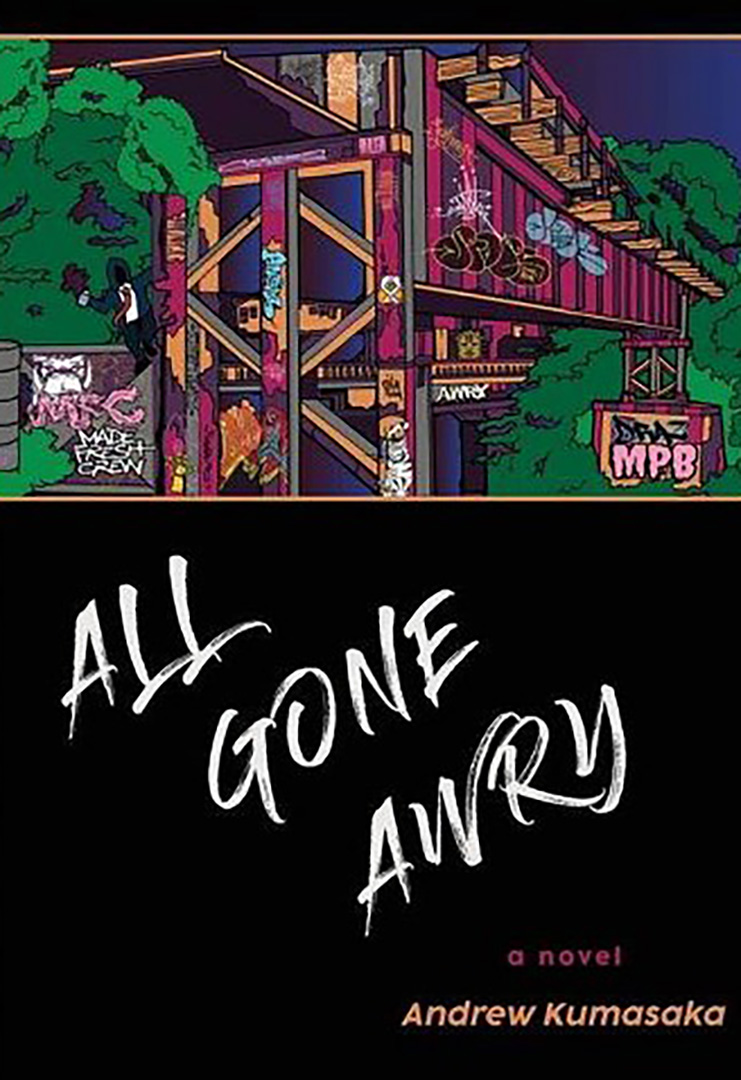 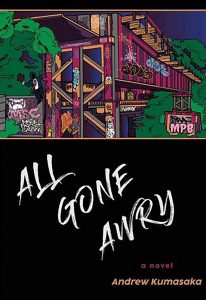 Poet and novelist Andrew Kumasaka grew up in Seattle, and is looking forward to a return visit to share his latest work, a novel entitled All Gone Awry. In this story, a respected art history professor is deeply affected by an earthquake in Japan that drives a tsunami toward California, and in response, he is propelled headlong into graffiti vandalism.

Kumasaka came to develop the professor’s story indirectly, while working on another tale about a young hapa woman, half Japanese and half white. “She would be an artist, probably a swimmer, maybe a student painter,” he said. “I needed a foil for her and came up with the Japanese American art history professor.”

But a chance happening led to a change in focus. “One day, while heading into work, I saw that the outdoor office signs had been tagged with graffiti,” Kumasaka said. “Even though annoyed by the act, I was equally aware of the beauty of the script.”

He found himself compelled by the contradiction. “Sometime later, I thought to myself, ‘What would happen if my art history professor became a graffiti vandal? How could that ever be?’” Kumasaka recalled. “And, not just any professor, but a third-generation Japanese American man. I took it as a challenge.”

After spending 30 years as a psychiatrist, Kumasaka wanted to delve into the psychology of this new character. “When clients came to me, it was as if they were handing me the manuscript of their lives,” he reported. “Each person was both the protagonist and the primary writer of his or her story. It was memoir, autobiography, fact and fiction.”

Along the way, Kumasaka entered into a partnership with each client. “I wanted to understand as deeply as possible, combining my training and experience with empathy,” he said. “Usually, they were suffering distress. They would trust me to enter their lives and to engage in a collaboration.”

Mental health and written narrative, for Kumasaka, seem to have certain similarities. “I had both the responsibility and privilege to help them shape the material and to change their narratives for the better,” he said. “I believe that the characters and scenes I create reflect what I’ve learned from them.”

But Kumasaka didn’t wait until his psychiatry career was over to engage in the creative arts. “I was one of those kids who loved to draw. My first ‘books’ were about dinosaurs, two volumes of pictures and captions, but no text,” he remembered. “In high school I began writing poetry.”

He continued to write through college and medical and psychiatric training. “After getting married and establishing myself professionally in Santa Cruz, I took a writing class and later found an excellent fellow poet and teacher, Patrice Vecchione,” he recalled. “In time, some of my poems got published in journals.”

Over time, Kumasaka felt constrained by the poetry and began to experiment with longer forms. “Writing my first short story felt liberating,” he said. “I loved the extra space but quickly filled that too. Wanting even more room, I decided to try writing a novel.”

All that fictional space led to a revelation about truth. “I thought I was free to say anything I wanted,” Kumasaka said. “In working with all that made-up material, I found I could express even larger truths than my poems could.”

Planning and plotting by creating a synopsis over a long period of time, Kumasaka finally found himself propelled to begin writing the actual novel by a sudden event. “On March 11, 2011, Japan was struck by the triple disaster of earthquake, tsunami and nuclear meltdowns,” Kumasaka recalled. “This became the heralding event for my story, one portending the upheaval in my protagonist’s life. It also provided the main symbolism for unexpected, disastrous change.”

Through two and a half years of writing and several major revisions, Kumasaka kept his characters’ voices in his head. “I tend to read with my ears instead of my eyes,” he said. “While reading, I internally vocalize every word on the page. Although this slows me down, it helps me to stay connected with the poetry of language.”

Beyond mere truth, Kumasaka has numerous goals for All Gone Awry. “I want to extend the Japanese American narrative into contemporary, postmodern times,” he said. “While appreciating stories of immigration and World War II injustices, I wrote a tale about a current-day protagonist struggling with psychological and relationship issues of his own.”

Kumasaka also aims to go beyond his character’s personal relationships and ask larger questions about art, community and belonging. “The novel examines the use of memorials in shaping the collective memory of groups, the prevalence of ‘trauma narratives’ over ‘progressive’ ones, and the importance of self-definition for maintaining personal cohesion,” he described. “It asks what it means for a member of a so-called model minority to commit a very public crime.”

During his tour to promote the book, Kumasaka looks forward to visiting family and partaking of the natural beauty of the Seattle area, and he is also interested to hear community feedback. “I hope to stimulate discussion on what it means to be Japanese American in present times,” he said. “To be viewed primarily as the progeny of wartime victims and heroes is limiting. Who are we now?”

Publishing his work during the COVID-19 pandemic echoes, for Kumasaka, the natural disaster that initially motivated his writing. “The pandemic has made it difficult to schedule public readings and book tours,” he said. “The only positive aspect of COVID for me was to make it even more urgent to see this book to completion.”