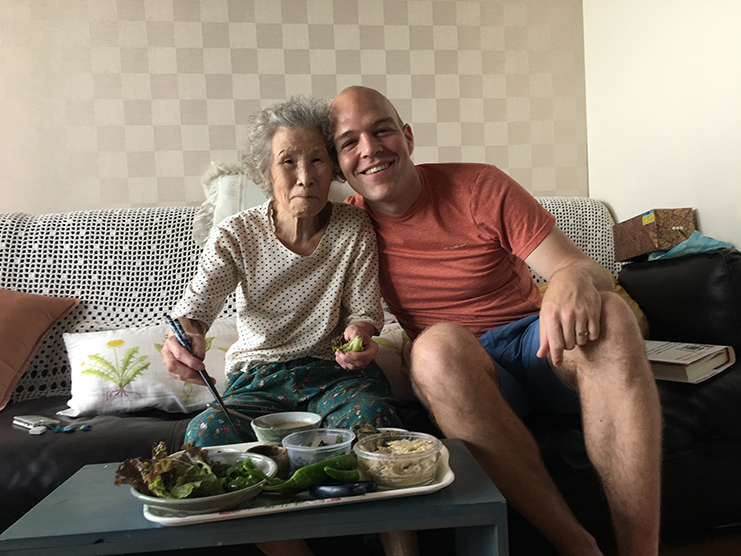 The development of South Korea from one of the poorest agrarian societies in the world to an urban, wealthy, high-tech powerhouse in such a relatively short time span has caused extreme generational gaps. This gap between an older, traditional, poorly educated agrarian generation and their children who went to school and then moved to the cities in ever greater numbers is a widely discussed and documented phenomenon.

Grandma Chun-ja is my wife’s grandma who is 85 years old. I lived in South Korea from 2008-2012, during which time I became very close with Grandma Chun-ja to the point that I consider her my own grandma. I recently travelled to Changwon-si, South Korea to visit Grandma Chun-ja and my wife’s family. Over many meals of my mother-in-law’s delicious Korean food, tears and laughs, she discussed her experiences described here.

The communist regime in North Korea, at least in terms of education and certain types of work, was much more willing to invest in women and give women professional working opportunities.

In South Korea at the time, due to both poverty and attitudes toward women, many women of the same age as Grandma Chun-ja were chronically undereducated to the point where it is not at all uncommon for women of this generation to be illiterate. (This fact is all the more glaring considering the amazing level of female education in modern South Korea). However, thanks in part to the communist ideology about equality between the sexes, girls like Grandma Chun-ja went to school and dreamed big, and men encouraged them to do so.

As Grandma Chun-ja went to school, she started to dream about becoming a teacher because she saw her teachers as looking “awesome instructing in front of the class.” Just by going to school, she saw a world that held possibilities beyond the house. As she fostered her dream to teach, her older sister’s husband, a middle-ranking factory worker further north, told Grandma Chun-ja that once she finished school, he would secure a job for her in the factory if she wanted.

The combination of going to school and being told by an older adult male family member that she could work left Grandma Chun-ja not only dreaming of but demanding a life beyond the traditional expectation of an arranged marriage and a life of housework and raising children. While the Korean War of 1950-53 permanently interrupted her education, Grandma Chun-ja had, by that point, gotten a middle school level education. After the war, the new armistice line placed her hometown of Sokcho just below the new armistice line. he now lived in South Korea.

She was also in her mid-teens at this point, which meant she was of marriageable age in the eyes of her parents and society. When presented with the husband her parents had chosen for her, she said forcefully she did not want to get married and spent two weeks secluded, crying and refusing to see her future spouse.

She resisted because she was unwilling to give up on her dreams of becoming a teacher and working outside the house. Ultimately, however, she did give in, recognizing the futility of resistance, given the lack of support from her family and society for going her own way. She got married and lived a traditional life as a homemaker and raised two daughters.

These two daughters benefited from the 1960s and 1970s push by the South Korean government to provide greater educational access for women and change societal attitudes toward women’s education. The government created advertisements extolling the virtues of equally educating women and men. As the South Korean economy was moving from agrarian to manufacturing-based, factories needed workers, and a male-only labor force was seen as insufficient.

Despite the changing economic context and its impact on women, once Grandma Chun-ja decided to not resist marriage and become a wife and mother, her mindset reverted to that of a very traditionally minded Korean woman. Grandma Chun-ja wanted her eldest daughter to finish high school and then lead a traditional life as a non-working housewife.

When pressed why she held such an attitude, Grandma Chun-ja stated she was afraid that her daughter would be ridiculed by older Koreans for going against the norm. The norm at the time, despite the government campaigns to change it, was that women should never work and remain at home. According to Grandma Chun-ja, going out alone as a woman would itself leave someone at the mercy of verbal insults from men.

In both cases her experience shows the importance of changing norms and the encouragement from individuals and society to follow a specific path.

While Grandma Chun-ja’s education did not lead to a professional career for either her or her eldest daughter, Grandma Chun-ja’s North Korean education left her far better equipped to be a mother in South Korean society where sons and daughters were now receiving a compulsory education.

The benefits of her North Korean education now as an older woman are equally important. She can read, and reading means access to other worlds through books. As her hearing has dimmed, she is also still able to watch TV with the help of subtitles. She can also read documents and handle her financial and health affairs. When her family is busy with other things, Grandma Chun-ja can solve problems on her own and consequently feels empowered and less lonely. There is a population of elderly South Koreans, especially women, who are illiterate and can be far more likely to be lonely and dependent on others.

The ultimate irony is that a country like North Korea, rightly demonized for its horrific human rights record and its extreme repression of individual freedom, helped put an elderly South Korean woman on the path toward late-life independence and empowerment.