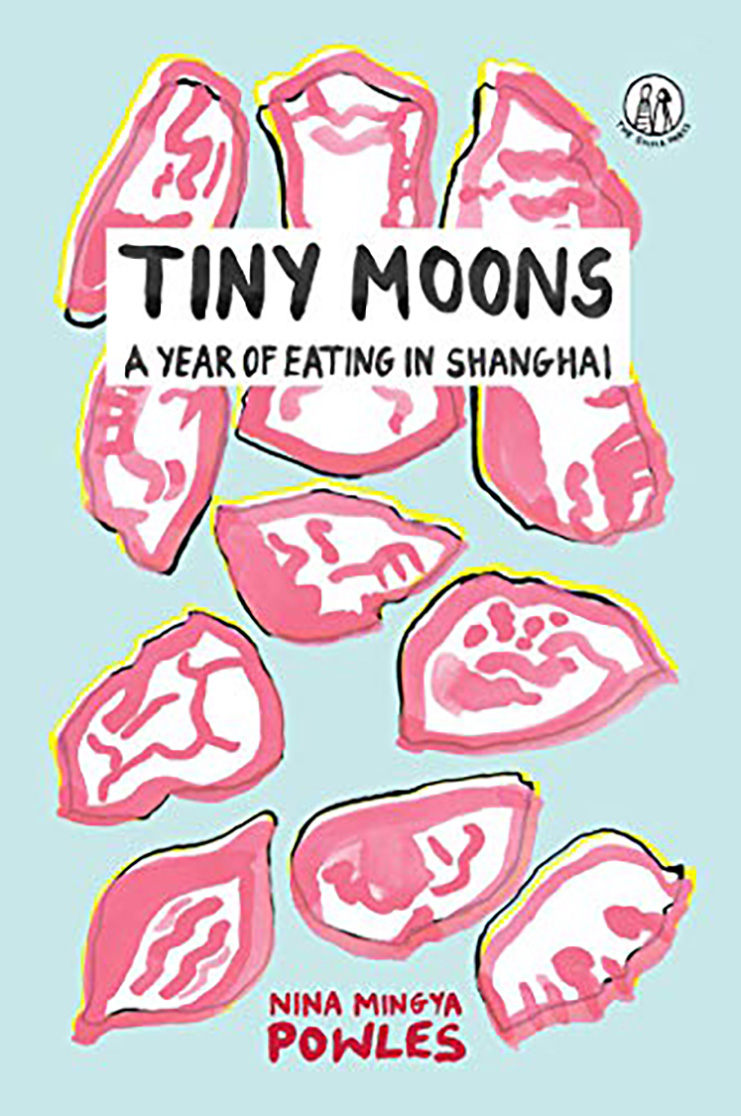 Author Nina Mingya Powles’s book, Tiny Moons: A Year of Eating in Shanghai, immediately captured my interest, since “eating” is not a trivial pastime, but a serious pursuit to which I have dedicated a lifetime of significant fork-to-plate, chopsticks-to-bowl activity. That “Shanghai” was the locale of choice heightened the book’s appeal even further. Having spent a mind-boggling, memorable month among the over 26 million residents in the “Paris of the East”, “Queen of the Orient”, “Whore of Asia” (all well-deserved terms of endearment) my anticipation of a nostalgic read soared exponentially.

On Tiny Moons’ arrival, however, I was both baffled and disappointed at its runty size (5.5” x 8”  – smaller than a standard sheet of paper) and number of pages (92 in toto). I couldn’t help but squint in disbelief at its anemic, nanoscopic appearance. More a novella than a novel, a pamphlet than a book. I speculated it could only hold a meager series of bites and nibbles – certainly not an entire year’s worth of palate pleasing possibilities. Curiosity overtook me: was it an appetizer only adventure; a finicky dieter’s picky probe; an extreme error in omissions? Was Powles anorexic or suffering from a bulimic purge while gorging her way through Shanghai? Who was this Powles persona, this trickster in writer’s garb? Intent on unearthing answers, I plowed the Google-verse for answers.

The award-winning Powles is a poet, essayist, zine maker (limited edition printings targeting specific audiences), poetry co-editor of The Shanghai Literary Review and founding editor of Bitter Melon, a small press that publishes limited-edition poetry pamphlets by Asian writers. Of mixed-race heritage – half Malaysian-Chinese, half Pãkehã (white New Zealander) –  she was born in 1993 in Aotearoa, New Zealand; at age 12 moved to Shanghai with her parents for several years; returned later as an adult for a year of language study on a Chinese Government scholarship; she currently resides in London.

Fan-thumbing quickly through it, I stopping to inspect the Table of Contents. The importance of seasonal eating in Chinese food culture was evident. Winter through Fall are chapter headings, each heralding edible seasonal bounties: Pineapple Buns (Spring), Sesame Pancakes (Summer), Boluo bao. . . . Scratching my head, I cruised back to the handy Glossary of 83 terms that detailed local expressions in both English and Chinese along with their translations, including the pages where they can be found. Boluo bao (pages 20 – 22) “. . . shining lusciously from Chinese bakery windows. . . their butter-sweet aroma and bright yellow tops light up the streets. . . the size of a bagel and made of fluffy sweet dough with a crumbly, sugary, bright yellow coating on top. . . decorated in a crisscrossed pattern. . . an afternoon tea staple in Hong Kong’s beloved. . . tea restaurants. . . there is always a queue, and you will always have to share a table with people you don’t know. . . the menu is… ’Cantonese Western’ (‘Soy Sauce Western’) food. . . a cheap option for those wanting Western food. . . available at high-end restaurants. . . comfort foods of my childhood.”

There, encompassed between three pages, is a sample of Powles’ diary-like, year-long journalistic notebook. A collection of essays documenting an intimate, personal account of the deliciousness of Chinese food – a cultural and emotional gauge for Powles since childhood – from which rediscoveries of often buried thoughts, memories and longings surface to become conscious insights as she explores her past and present drive to satisfy an insatiable appetite.

Tiny Moons is the author’s public quest for personal answers. An autobiographic probe of troubling emotions for which interpretations have eluded her for years.

Powles spent a year living and studying Mandarin in Shanghai attempting to reclaim a language of her childhood.“Despite being fluent in Cantonese as a toddler, over the years I (let it) slip away. I starved myself of language,” she says, referring to an initial reluctance to speak or learn her mother’s native tongue, “but I couldn’t starve myself of other things. Wonton noodle soup, Cantonese roast duck, my mother’s crispy egg noodles and her special congee . . .”

Her deep-seated feelings of unease and rejection regarding aspects of her mixed Malaysian-Chinese and Pākehā birthrights continued to plague her as a young adult. “Big hips, brown eyes, and brown hair. . . The way I look has given me enormous privilege my whole life. . . white school, white university. . . white suburbs, white poetry readings.” Yet, the advantage of entitlement preyed on Powles, who harbored emotions of inadequacy from an early age. “Sometimes,” she wrote, “I feel like I have no right to claim any part of my Asian-ness. . . . When I was about five, I started to hate my weekend Chinese classes. None of the other kids looked like me. None of their dads looked like mine.” She concluded, “I stopped attending classes. Eventually my mother stopped using Chinese at home, or maybe I just stopped listening.”

Tiny Moons transports you, along with Powles and her baggage of hyper-anxieties, on her search for self. Psychologists note that food is one of the most powerful memory gateways that can engage or overwhelm all five senses, summoning back strong images, recollections, and feelings to the conscious mind. Powles’ “year of eating”– each bite, every meal – resembles a series of prolonged psychoanalytic food couch sessions resulting in self-introspective excursions tapping into repressed emotions and memories of early childhood to uncover anxieties that have driven her thoughts, feelings and behaviors for years.

In the course of her Shanghai feeding frenzy gone wild, in the process of recovering what she lost, in attempts to rediscover and recapture the Malaysian-Chinese heritage once rejected, Powles’s salient discovery is that food was her means of finding a way back to her Asian birthright.

Tiny Moons: A Year of Eating in Shanghai is the story of “Everyone” who has ever struggled with painful identity issues. Powles has penned a quick, delicious read of a noteworthy, insightful exploration for both author and reader alike.