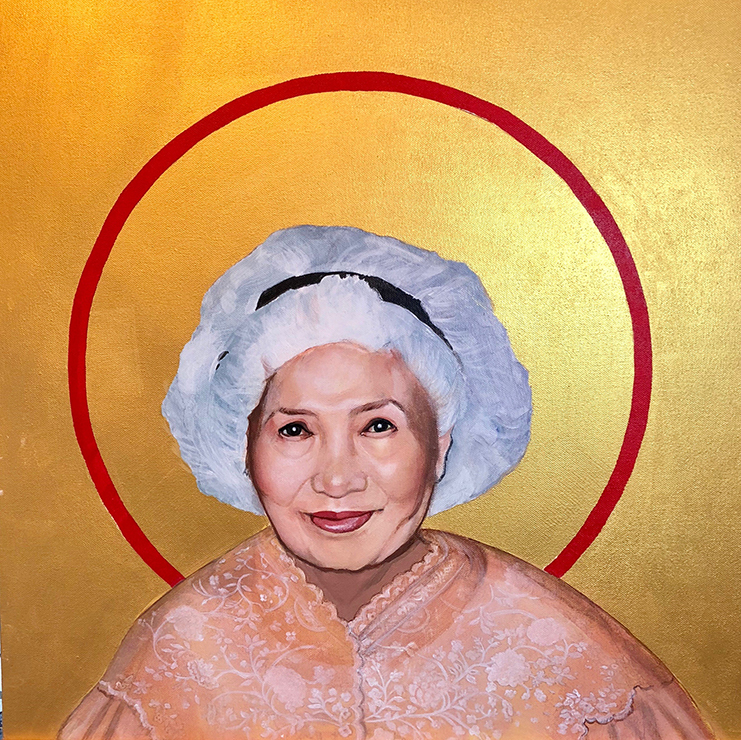 On February 6, community members, artists, and members of the public gathered at Seattle Central College’s M. Rosetta Hunter Art Gallery for the opening reception of Aming mga Pangitain: Our Visions, an exhibition that explores the spectrum of Filipino American experience. The exhibit features works in a a range of styles and mediums from five Pacific Northwest artists: Beija Flor, Raphael Laigo, Sam Rodrick Rojas-Chua, Lisa Castilliano Szilassy, and Jeanette Tiffany.

Upon entering the gallery, viewers are immediately welcomed by glimpses at Jeanette Tiffany and Raphael Laigo’s paintings. Jeanette Tiffany’s work features acrylic paintings of her family based on photographs. One of Tiffany’s pieces, “Laigo” is a painting of Bibiana Castillano, Tiffany’s mother, who was also an artist during her time. A circular ray is drawn around her frame, representing her as a “household saint” figure in Tiffany’s life and the Filipino American community of Seattle.

“She came in the 20s. She was one of the first five Filipino women in Seattle, and she was really a force, I think. I started thinking about people that have passed. You know the phrase ‘household saints’? I never used it before, but now I think about it all the time. This piece is a homage to the early pioneers of Filipino Americans in Seattle who made sacrifices to see their kids succeed.”

“I try to use images as a way to communicate something. The ideation carries on from the motherland to where I am and then applied in a parallel sense. I wanted to use the center image [in Ojos Rasgadowes] as the main composition because I like nature, but I found that it meant something as I created it. That was the water that runs through it. It kind of reminds me of the archipelagos and the way that it gets people connected to the Pacific Ocean. It’s a Pacific Northwest inspired piece, but I feel like the water going through the land connects to our geography.”

The left side of the gallery showcases the work of Sam Rodrick Roxas-Chua, whose art denotes a style of artistic writing called asemic writing. Roxas-Chua’s work represents a visual manifestation of his poetry. Roxas-Chua describes his work as “asemic writing approached from a poetry point of view.”

“As I create these nonsensical writing, images start to come to mind. They say that poetry is for events in our lives that we don’t have words for. But I wanted to add to the dialogue. I’m sure there are events in our life that are just so bad that language cannot put a name to it. I feel that asemic writing is a representation of those moments.”

Across the room is a piece by Beija Flor entitled “Fortune Teller Fish.” Flor is a mixed media artist who combines science and physics into her art. Her piece features a suspended figure comprised of fortune teller fish pieces. On the wall behind it is a magnification of the envelope that contains the key to the fish’s movement.

“Fortune fishes were a big part of my childhood. I was given one, and I was thinking about the idea of placing my own body in the palm of another’s hand. I think that’s a universal experience that’s often found to be common among Filipina women. I discovered that I often placed myself in the palm of another’s hand, and hadn’t paid attention to my body language as a response to that vulnerable position. I invite others to view this and be aware of being delicate with their own body— and to be delicate with those who place themselves, so to speak, in the palm of their hand.”

The wall adjacent to the entrance features a series of finger paintings created by Lisa Castiliano Szilassy. Szilassy is both an artist and writer who writes primarily Young Adult novels. In her art, she recently has been experimenting with oil finger painting, which is the primary medium used in her featured work. Her paintings depict various landscapes, among which are a visual of Chinatown and cherry blossoms along a road.

The purpose of the exhibit was to showcase the legacies of the Filipino American artist community in Seattle and to create a space to display the moving works of a diverse range of styles inspired by individual and collective Filipino American experiences.

“Val was one of my mentors. A lot of the artists here are related to Val one way or another. Raphael’s a grandson of his, and Jeanette is his sister. Bibiana- portrayed in the painting there done by Jeanette- is actually his great grandmother. And she was an artist herself, so there’s a lineage there.”

The program was structured in a way that bridged the visual artists and poets of the community together. The opening reception began with Roger Rigor and the Barriotiques- Abe Legaspi, Alex Urap- performing haranas and kundimans on classical guitars. Havanas and Kundimans are courting songs from the barrios and heartlands of the Philippines.

Following Roger Rigor and the Barriotiques, poets Sam Rodrick Roxas-Chua, Louie Vital, and Bob Flor delivered original poems that were written in response to some of the art featured in the exhibit.

Sam Rodrick Roxas-Chua is also one of the exhibit’s featured artists. The first poem he performed was “Grandfather as Ether” and was based on one of his featured asemic visual pieces. He describes the origin of the piece being “from a dream I had, being on a boat with my grandfather in the Philippines.” The second poem he performed was an untitled poem inspired by his time in Manila, accompanied by asemic piece that Sam unraveled in front of the audience.

Louie Tan Vital is a poet, community activist, and graduate student at the University of Washington. She performed a piece entitled, “Aking Gamot,” written in response to Raphael Laigo’s work entitled “Mischief Yogin,” which was featured on the reception’s program card. Vital’s poem explored the theme of diaspora and written with lines in both Tagalog and English. A significant aspect of Vital’s performance was a reflection on not only the poem, but also on the artistic process and message that writing and performing the piece conveyed.

Vital recounts, “As a writer and as a poet, I’ve only ever written for myself, so this is my inaugural endeavor for me to respond to a piece. And I must be honest and say that I was fairly nervous in responding this work. I was really hesitant about getting it wrong. But what is art really if there is not room for multiple interpretations?”

The third featured poet was Bob Flores. Flores’s first poem was called “Uncertainty,” a reflection on Lisa Szilassy’s featured painting “Chinatown.” His second poem was called “Apology,” a reflection on “The Conversation” by Jeanette Tiffany. Flores’s interpretation of both pieces brought the audience through a journey of the images conveyed in Szilassy and Tiffany’s paintings, as well as the reflective imagery of Flores’s impressions of each.

When asked about the process that brought the exhibit to life, Bob Flores responded, “It didn’t take me long [to plan the exhibit]. The key was talking to Ken Matsudaira.”

Ken Matsudaira, the exhibit’s curator, expressed that creating spaces that offer an opportunity for students and the public to learn about the intricacies of local communities is his goal when curating exhibits at the college.

“Bob approached me with the idea, it really was his brainchild. It just seemed like such an opportunity to have this wonderful snapshot of our community with all these crossovers between relationships and all the different kinds of subject matter. It represents this sense of community and shows the ways artists can bounce off of each other, like how different works inspire the poets. As far as exhibitions at the gallery, that’s really what we’re looking for. To create exhibits that demonstrate a vast cultural diversity of Seattle, that resonate with the students that we have here, that tie into the history of the area, and that help inspire future artists and future generations of art. Having this kind of exhibition is really what I strive for in developing works.”