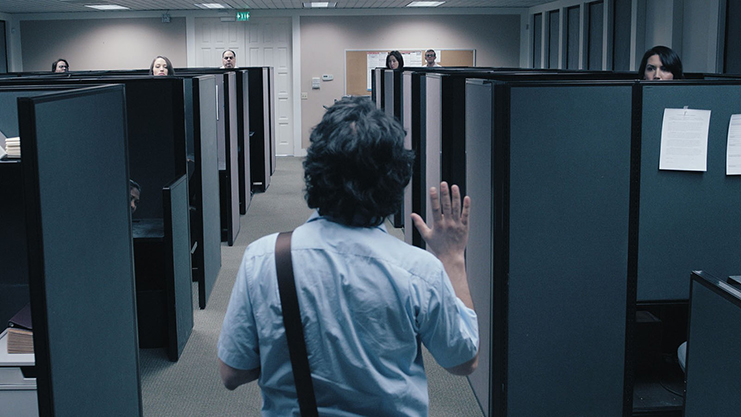 Until King County moves into Phase 4 of Washington’s Roadmap to Recovery from the COVID-19 pandemic, the Seattle International Film Festival is presenting new films online. One of those films during April is All Sorts, starring actor Greena Park as June.

All Sorts was developed in the Pacific Northwest and filmed in Yakima, and focuses on a lonely office clerk named Diego who discovers a secret doorway in his employer’s office. Once through the door, Diego encounters an absurd world centered on competitive champion folder filing, and he falls for June, who appears to have the talent to win the game.

Park was drawn to the role of June because she sees June as a reflection of herself. “A wolf in sheep’s clothing, but June does not know it,” Park described June. “I actually want to say ‘a tiger in deer’s clothing.’”

This multiplicitous character led Park to conclude that it’s okay not to know what you are good at. “It’s okay not to fully understand who you are,” Park said. “Like Diego and June, we are all different, and something that we think is a weakness can be a strength, what sets us apart, what makes us shine.”

Park was originally drawn to the acting profession because it allows her to step into others’ shoes. “Acting allows me to live other people’s experiences, an alternate world from my own, and I came to love movies because it was an adventure,” she said. “It’s a journey I get to share with others, and by acting I participate in that experience.”

Her training also includes several dance forms, including ballet, jazz and martial arts.  “Dance training is an expression of the body,” she said. “It builds muscle memory and facilitates communication. One fingertip or even a gaze, each and every expression and movement enhances performance, and as an artist it frees you to utilize all that while acting.”

A skilled body serves Park well, since she reports continuing challenges with language.  “It’s been six years since I came to the States, and just like any other change, there are cultural differences that I am still learning and experiencing,” Park said. “There’s no end to learning, and I think it’s a challenge to portray a character to its full potential. At least now I know the difference between Southern and Eastern accents.”

Despite these challenges, Park really enjoyed filming All Sorts in Yakima. “The people were so supportive and warm, a very welcoming crowd that made the film possible,” she said. “At first when I heard Yakima, my family thought I was going to Asia. When I sat down with Rick, the director, he said Washington and I thought DC.”

This initial confusion was resolved to Park’s great happiness. “I knew nothing of the city, and what once was a foreign destination now has become the city with the most memories for me,” she said.  “I would love to film in Yakima again and honestly can’t wait to go back!”

It’s unclear when Park will return to Yakima, because she has other projects in the works. “I have an action film in mind,” she said. “A story about a woman with a secret who tries to live a normal life with her family, but then something happens. Still in the works, but excited for what’s coming.”

All Sorts runs from April 8 to 18 at Seattle International Film Festival, https://www.siff.net/festival/all-sorts.  Live Q&A with director J. Rick Castañeda is on April 15, 8:30pm.