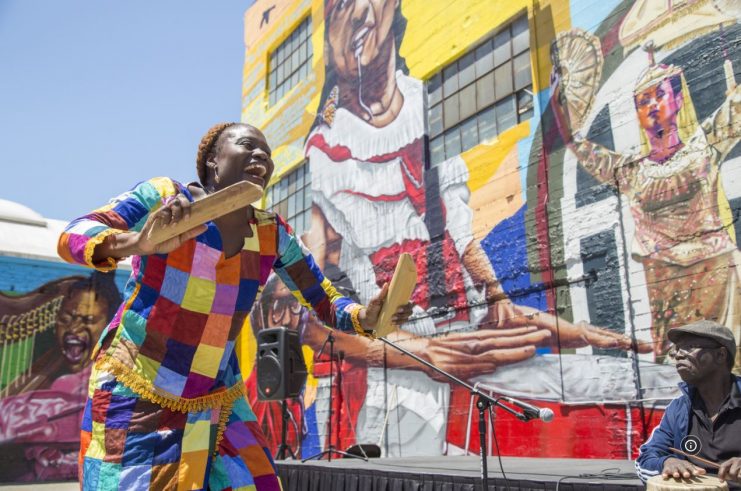 Alice Street in Oakland, California, is the site of the renowned Alice Street Mural Project, created by the Community Rejuvenation Project, and when a building was constructed to block visibility of the mural, it touched off conversations about gentrification displacement, and community.

Filmmaker Spencer Wilkinson decided to document the excitement and controversy about the Alice Street Mural beginning in 2013, and the footage ultimately became the documentary film Alice Street.  “I reached out to one of the lead muralists, Des Mundo, since we knew each other through mutual connections, to hear more about their plans,” Wilkinson said.  “As they were planning to conduct research about the cultural communities based in my neighborhood, I was personally interested to support their work as a documentary filmmaker and to conduct interviews.”

Initially, Wilkinson planned to focus on the creation of the mural.  “Our plans shifted when I learned about how the mural would deeply engage the community,” he said, “and became a visual metaphor for the rampant gentrification planned in downtown Oakland.”

Alice Street focused on the cultural fabric of Oakland.  “We focused heavily on researching the history of the Pan-Asian neighborhood of Oakland Chinatown due to its proximity to the mural site,” Wilkinson said. “Oakland Chinatown was founded near the beginning of Oakland, but was displaced three times due to the city’s discrimination against its Asian residents.”

This displacement continues to this day.  “Oakland Chinatown is also being targeted for large-scale development projects and it’s resulting in displacement of residents and small businesses,” Wilkinson said. “The Oakland Chinatown Coalition worked closely with representatives from the Black community in Oakland to negotiate for community benefits and this was an inspiring part of the story in Alice Street.”

The showing of Alice Street began last year.  “As part of the festival tour, Alice Street was selected by over 40 festivals and won several awards,” Wilkinson said. “The film has been used in community discussions throughout the country as part of our 2021 California impact tour. It’s been translated into five languages and shown in Europe and Asia.”

More recently, in March 2022, Tabatha Laanui joined the team to support the expansion of the film’s impact campaign from a California-based tour to a national campaign.  “Alice Street has screened in all types of community spaces including independent theaters, American Legion halls, university auditoriums and art centers,” Laanui said.  “I have been primarily focused on developing screenings in the Pacific Northwest, Utah, and Texas.”

Laanui says viewer interest in the film has been growing.  “The goal from the beginning has always been using the film to create engaging dialogue focused on local issues,” she said. “We have not been measuring our success in ticket sales but through positive responses and actions of those who have chosen to partner and participate in the tour.”

She reports discovering that gentrification is a national issue.  “Americans in smaller metro areas have been experiencing it for the first time, skyrocketing cost of living adjustments has made it tough on everyone,” she added.  “Individuals inspired to tackle this issue head on have opened the door for others to discuss what can come next.”

By developing relationships in the Puget Sound area, Laanui and Wilkinson have coordinated local screenings of Alice Street.  “Urban Art Works connected us with the organizers of the Seattle Hip Hop Festival, an upcoming cultural event at Washington Hall on November 5,” she said. “Alice Street will screen as the feature presentation for the festival and the film director Spencer Wilkinson and the lead muralist Desi Mundo will be there to answer audience questions.”

The pair are also thrilled that Ken Matsudaira, Director of Cultural and Community Programs at Bainbridge Island Museum of Art (BIMA), has also been an early supporter of the project.  “BIMA will be screening the film and hosting a post film Q&A on November 6th at 5pm,” Laanui reported. “We are excited to screen at two events in Seattle and hope those interested in the intersection of arts and community advocacy can attend at least one of these functions.”

More information on Pacific Northwest screenings can be found here: