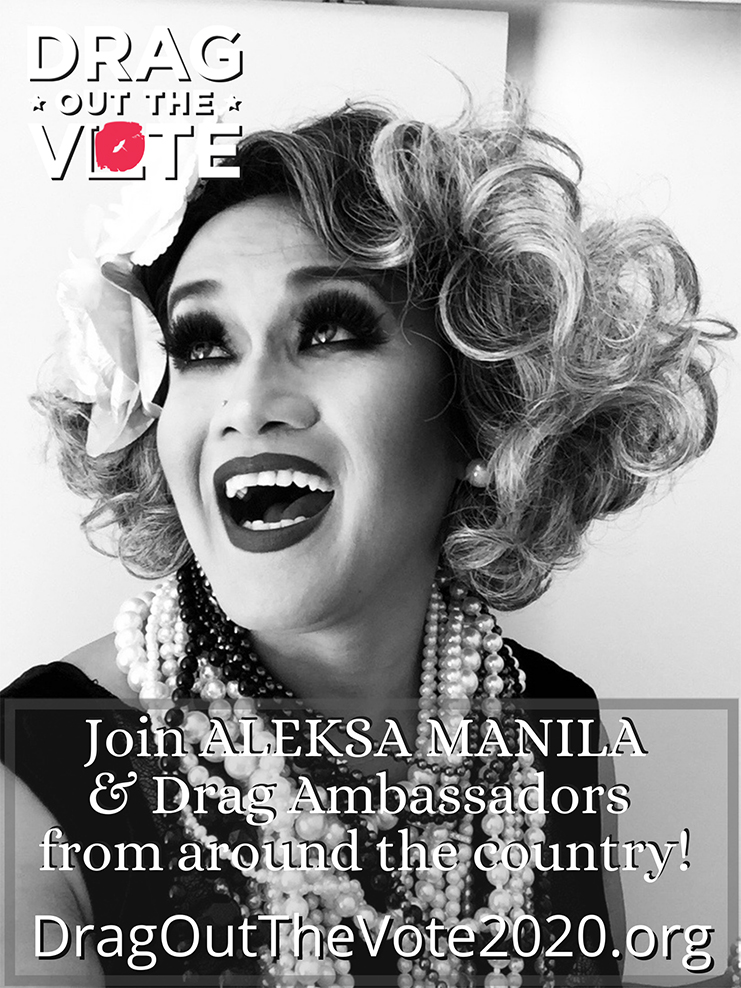 The COVID-19 pandemic has hardly slowed down drag performer Aleksa Manila. Her day job as a behavioral health specialist for Public Health – Seattle & King County brought her to the frontlines of the COVID-19 quarantine and isolation sites, where she provided comfort and resources to patients. Meanwhile, Manila’s advocacy and art — drag performances, keynote speeches, participation in panels on racial justice, equity, LGBTQ+ and Asian Pacific Islander American issues — have continued in the virtual realm.

As the November election approaches, Manila will serve as a drag ambassador for Drag Out the Vote, a nonpartisan organization that recruits drag performers across the country to mobilize voters, particularly young people and the LGBTQ+ community. As a drag ambassador, her reach includes Seattle and King County, and beyond. Two other drag performers in Washington have also been recruited for this effort: Drag King Ceasar Hart and Drag Queen Gaysha Starr.

The country is facing “an incredibly critical moment,” Manila said. “Blink and it’s gonna be November. Time is ticking.”

Manila will use her colorful social media presence and the skills of drag to engage people, have conversations, and help people vote. She even plans to show up at polling stations in October.

She wants to make the voting process flamboyant and fun.

“Against the backdrop of COVID, a lot of people are feeling really, really down and dark and depressed even,” Manila said. “If we can bring a little bit of sunshine in their lives, let’s do it. Oh, and by the way: Vote.”

In her Drag Ambassador role she won’t tell people who to vote for, as she will represent a nonpartisan organization. But anyone who knows Manila’s work won’t be surprised that the election has a lot at stake for her personally.

“It might sound selfish, but I don’t want to have another same four years,” she said.

“I’m one of those. That’s basically telling me, ‘Oh you don’t fit in the heteronormative binary, we’re gonna fire you and you have no other recourse. We can fire you. And you don’t look masculine enough for this workspace. We can fire you. Good luck finding another job.’”

She wants to remind people to vote, not just for themselves, but for others who cannot. “Oftentimes I might hear people say, ‘Oh I’m not into politics, I’m not political.’ But you’re benefitting — or you are negatively impacted — regardless.”

As a queer immigrant from the Philippines, “My existence is political,” Manila said. At the same time, as a U.S. citizen, Manila sees her ability to vote as a privilege “Even though I am of the minority, I am not deficient in power and privilege. I do have the right to vote.”

AAPIs are the fastest-growing ethnic group in the U.S., and a significant voting group in Washington state, with half a million strong.

But only 54 percent of eligible AAPIs are registered to vote, according to APACEvotes, an AAPI civic engagement organization. The result is that AAPIs are often “pushed under the rug,” said SuYoung Yun, Program Manager at APACEvotes. And a lack of political representation can lead to a cycle in which fewer AAPIs vote.

AAPIs are also neglected in voter outreach and education. “Many AAPIs, the whole spectrum — immigrants, elders, young people, do not get voter contact material,” said Yun of APACEvotes. This includes mailers, texts, door knocks, and voter registration information — especially outreach in languages other than English. “They say it takes six touches to actually move a voter, and many of our constituents are not even getting one,” said Yun.

Manila wants to engage all voters, particularly the AAPI community, the LGBTQ+ community — which also has a lower voter turnout — and the intersections between them.

In this, Manila will use the skills of drag.

“I think the charisma of being a drag queen is that you are a people person,” Manila said. “And even if your persona or your character is, say, the angry drag queen, people are still going to look at you, watch you and be entertained by you. That’s the art of drag, also the power of drag, because you have a captive audience.”

Manila is keenly aware that historically, drag performers have been leaders in social change. She thinks about her “fairy godmothers” Silvia Rivera and Marsha P. Johnson — two trans women, one Puerto Rican and one Black, who in 1969 helped start the riot at Stonewall, an underground gay establishment in New York, and thereby the first Pride.

“Back then, it was illegal to be gay, and somehow that night, they were like, they’ve had it,” Manila said. “They don’t want to be second class citizens anymore. Historically, LGBTQ folks almost always align with other minorities, be it Black or brown people, because we’ve unfortunately shared a lot of the aches and pains of being a second-class citizen.”

Combining activism with drag is nothing new for Manila herself. She earned her first drag pageant title, Miss Gay Filipino 2001, for a show whose tickets helped pay for a senior program at the Filipino Community Center. “If that isn’t about social justice, using drag entertainment to bring people together, I don’t know what is.”

Manila entered drag as part of a personal journey into gender identity and expression. “But also, it really did become a catalyst for me for social activism. I learned early on that if people are gonna look at me, then I want you to listen as well. So far so good. So far. So good.”

What about people who feel alienated with electoral politics altogether? Manila said she would find a way to reach them where they are, and engage in a way they would best respond to.

“We’ve got an opportunity to still make change. And it may not be overnight,” she might say. “And if not for you, if not for me, for the children. And I might go into that drag flair.”

King County residents have until Oct. 26 to register online or by mail for the Nov. 3 general election. You can register to vote or update your information at the Washington Secretary of State’s website: https://voter.votewa.gov/WhereToVote.aspx.

Ballots will be sent out to King County voters starting Oct. 14, and ballot drop boxes will open Oct. 15.