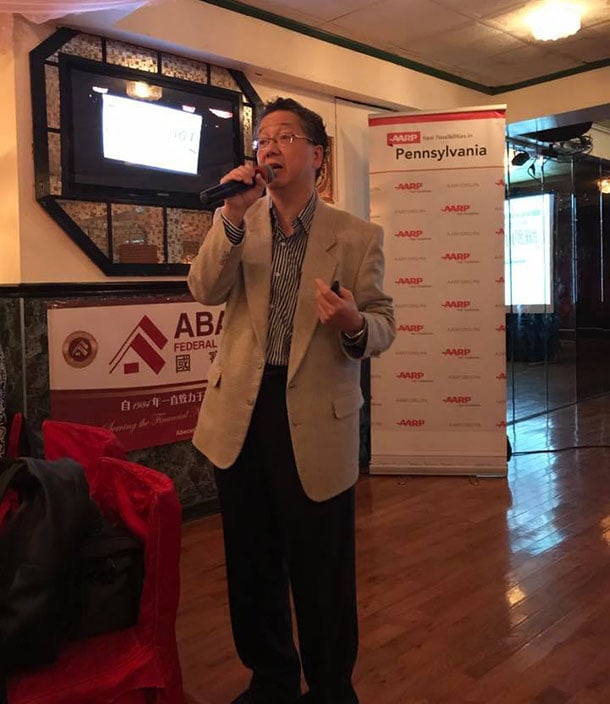 Alan Lai has been helping Asians from being victimized by crime for decades. “I was involved in fighting human trafficking before the federal government [made it a talking point],” he says. “I started out as victim’s advocate for Seattle Police Department.”

His career is worth a book. “I went to the first human trafficking conference, took a picture with George W. Bush,” he says, proud of his accomplishments.

Today, his focus is most often on preventing fraud and scams against Chinese and serves as AARP’s Victim Advocate. In an AARP survey of fraud against older Asian Americans, 72 percent said that they or their family members have been the target of a fraud scheme, and 39 percent have been victims. About 13 percent of survey respondents suffered financial losses, with the average amount over $15,000.

At 63, Lai is a sought-after speaker for communities and law enforcement across the country on how Asian Americans and especially older Chinese are easy targets for criminals. “The Chinese immigrant community – that’s my specialty,” he says.

“Being a victim advocate, I worked with fraud cases a long time ago, but there are more. The blessing scam is the most vicious kind.”

In the blessing scam, which originated in China and Hong Kong and is aimed at Cantonese and Mandarin speaking immigrants, three perpetrators trick a victim into putting money or jewelry into a bag and let a healer bless a family member who might be sick, or the scammers claim is about to befall a tragedy. The bag isn’t supposed to be opened for a length of time, but the scammers switch the bag and steal the valuables before it’s opened.

“Every now and then they have something new,” Lai adds. “The Consular Scam is new and very sophisticated. Some are like Chinese or Asians are very respective of law enforcement to the point that they are afraid of them. They pay particular attention and they dare not say no.”

The Chinese government released an alert earlier this year warning Chinese-speaking immigrants about phone scams claiming to be from the Chinese consulate. These scams tell victims to send money or give up personal information because of a nonexistent criminal charge, or claiming they need the information to deliver a parcel.

Although Lai has worked with other ethnic communities including Vietnamese, he says that he focuses primarily on Chinese immigrants because he’s bilingual and speaks both Mandarin and Cantonese. “Chinese minorities are susceptible because they don’t have language skills,” he says. He serves as a language bridge between the victims and the authorities.

“The community is slowly learning,” he says. “People like AARP do excellent things with community outreach and education.” But a lot of these people are minorities, and there are a lot of ways to trap them.

“If you have limited English you work long working hours in restaurants. To fulfill the American dream, most work two jobs, three jobs and many of them don’t have the time for community education. You have to bend over backwards reach them.”

You can advertise, he says, but the victims invariable say “I’m busy, I don’t have time for that.” He tells them some of the most tragic stories, where people have lost their entire savings, to get their attention.

Cultural values can also complicate efforts to help immigrants – especially the Asian cultural value of shame. “On case I worked on, the perpetrator ripping off Vietnamese was also Vietnamese, and on law enforcement’s radar. He advertised in the Vietnamese newspaper and pretended to be an ICE officer, even made business cards. He collected cash from victims saying he can fix anything related to immigration, bring your loved ones over sooner, fix a ticker, fix the test for license.”

There were over 100 victims. But the police were stymied because of the community’s culture of silence. “No one came forward to talk,” Lai recalls. “They were ashamed, because they were victims, and because they were paying their money to do something illegal.”

“I helped them do a community meeting to have the victims come forward. We did it in the Vietnamese temple. They came but didn’t come inside, they were afraid to come in – they stayed outside.”

After seeing their reluctance, Lai spoke with the prosecutor and, he agreed not to prosecute the victims and announced that decision at gate of temple. “We just want to get the big shot,” Lai recalls. Then they came in and shared their stories.

Lai’s own Asian heritage makes him the right man to serve as a bridge between American law enforcement and the immigrant Asian community.

“Looking back, I’m happy with what I’ve done and the way I am,” he says.