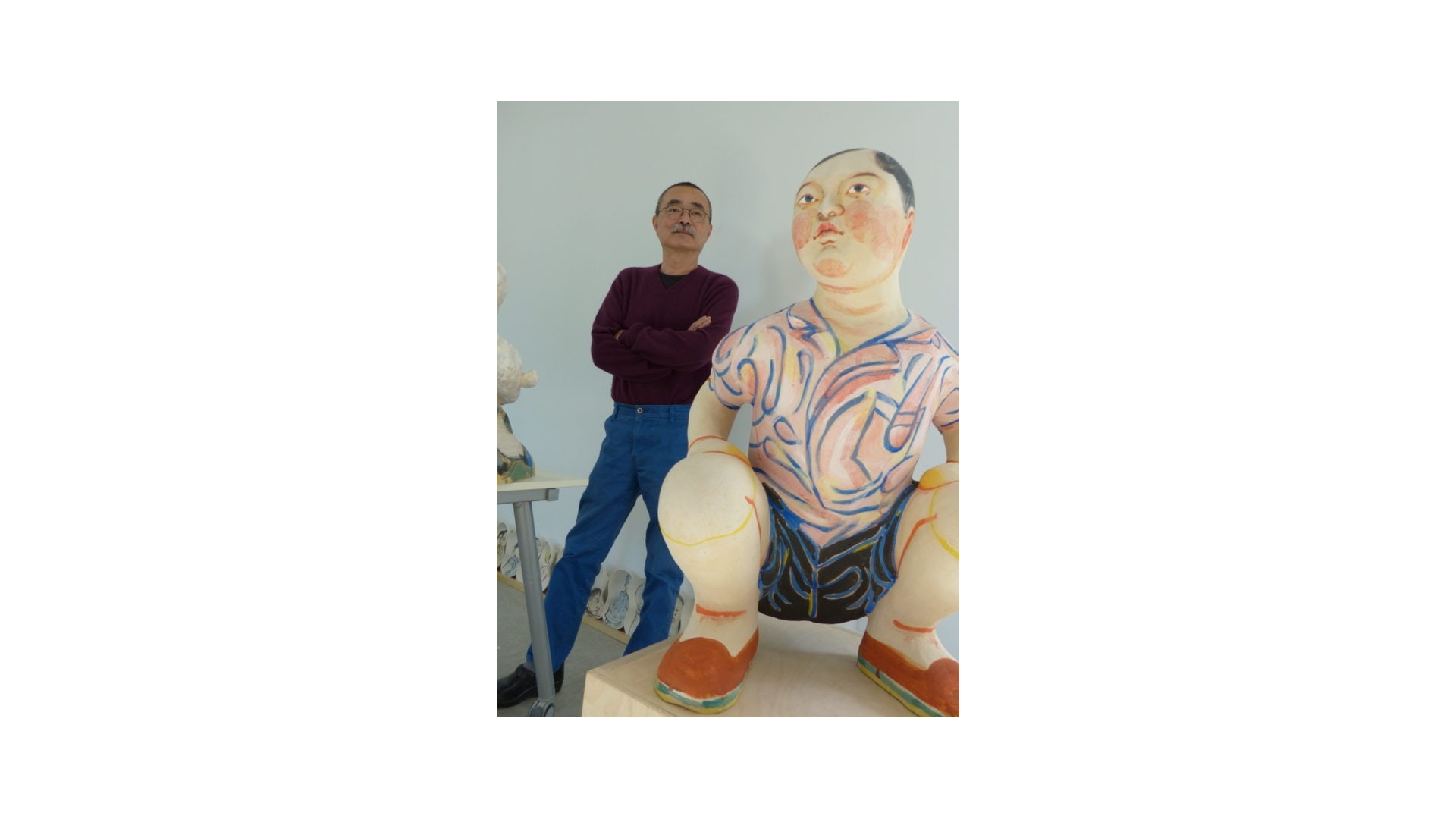 Seattle lost a brilliant artist and a beloved teacher and friend with the death of Akio Takamori in January. An internationally renowned sculptor in ceramics, Takamori was best known for installations of large stoneware figures, eloquent witnesses to world events, art history, and the mysteries of childhood and old age.

His final body of work, Apology/Remorse, is currently on view at James Harris Gallery. The sculptures and brush-and-ink paintings are drawn from media images of government and corporate officials admitting guilt and apologizing. “Willy B,” the central piece in the show is based on a 1970 news photo of German Chancellor Willy Brandt falling to his knees at the Holocaust memorial in Warsaw, Poland. Several figures have male heads on female bodies, a frighteningly appropriate fate for a misogynist. Three drawings depict men bowing deeply in a Japanese ritual gesture of apology. Others confront microphones in public confessions of culpability. Takamori left us with a lesson on personal responsibility and redemption, a cautionary tale for our times. After ten years as his gallery representative and friend, James Harris is still discovering layers of meaning in the artist’s work.

“I knew it connected his Japanese heritage to Western ideas regarding sculpture. But I began to see how the conceptual underpinnings of his work investigated broader cultural issues. We all know the exquisite glazing and sensual volume of his forms but under this beauty there is so much more Akio is trying to show us.”

Takamori grew up on the island of Kyushu in post-World War II Japan. Although small and rural, his hometown of Nobeoka afforded him an expansive view of the world. The son of a doctor, his household included patients, medical staff, and students, and welcomed traveling puppeteers, painters, and poets. The library was full of science and art books, both Eastern and Western, and the countryside teemed with folk tales and legends.

Attracted to three-dimensional art at an early age, Takamori studied industrial ceramics in college, then apprenticed in a traditional Mingei-style pottery studio. There, he was recruited by a visiting American artist, Ken Ferguson. Takamori came to the United States in 1974, taking a B.F.A. under Ferguson at the Kansas City Art Institute and an M.F.A. at Alfred University in New York. He spent the next decade moving through a series of residencies and university teaching positions in the United States, Japan, and Canada including stints at the prestigious Archie Bray Foundation in Montana and the studio of Japanese ceramics star Jun Kaneko. In 1988, he moved to the Seattle area to teach at the University of Washington. He joined the faculty full time in 1993 and later chaired the Ceramics Department, retiring in 2014.

“Each time you move somewhere completely new, you have an anxiety, you have to adjust yourself. But that is a really good opportunity to renew something, to reinvent yourself,” he reflected in a 2006 interview. “I guess that, when I came to the States, I chose that. I wanted to get out of one place and come to a new place. … That’s what gives me a sense of energy to get going, to reinvent something. [There is] an old saying in Japanese, that if you really care for your child, you must send them away.”

In the United States, Takamori escaped the traditional dictates of Japanese pottery. After pushing the vessel form to its narrative limits, he made the transition to figurative work during a residency in the Netherlands in 1996. In the words of Garth Clark, ceramics historian and Takamori’s longtime gallery representative: “He had left for the Netherlands a potter and returned a sculptor.” That first group of figures was a memoir of archetypal characters from his child- hood village.

In subsequent series, he continued to explore themes from his past: historical figures from World War II, iconic images from Western art, and mythical beings from Japanese folk tales. He hand-built these large figures in stoneware, applying their features in transparent glazes reminiscent of Japanese sumi painting. Over time, Takamori simpli ed his ceramic technique in order to emphasize storytelling. Many of these works were brought together in a 2006 exhibition at the Tacoma Art Museum, “Between Clouds of Memory,” a retrospective honoring the artist’s distinguished career.

“He always challenged what ceramics could do, the boundaries, the context,” recalls friend, former student, and fellow ceramicist Yuki Nakamura. “When I feel challenged, I think ‘What would Akio do?’”

Takamori was a truly bicultural individual. He viewed his native and adopted countries with objectivity and affection. His thoughtful, nuanced observations of both cultures took shape in his work.

“When I came here, I was interested in learning Western culture, in an American education,” he recalled in 2006. “Then I realized that, as Japanese, the American people had an expectation for me to show them my culture in my artwork. At that time, I resisted; why do I have to make traditional Japanese artwork? But then you have [an] opportunity to look at your own culture and history. It started grabbing me. When you’re in Japan, you grow up looking at the West. Now I’m living in the West and looking at the East.”

In recent years, Takamori confronted mortality and the passage of time through his work. Babies and children represented the innocence and innate wisdom that we bring into the world. His colorful figures of children had an adult worldliness, their faces watchful and knowing. He spoke of the Japanese belief that infancy and old age, birth and death are marked by the same state of divine innocence. At the time of his 2006 retrospective, Takamori looked forward.

“I have two goals. One is I would like to be able to keep on creating until I die. I don’t want to stop. I would like to be creative. And then the second is, I’d like my work to keep on progressing. … I’d like to get better and I’d like to keep on going with a strong motivation.” Takamori got his wish. Diagnosed with pancreatic cancer in 2014, he continued to work, creating an installation for the Portland Art Museum where he received a Contemporary Northwest Art Award in 2015; and annual solo shows for the gallery. On the last day of his life, with the help of his son, he loaded new work into the kiln to fire.

‘Akio Takamori: Apology/Remorse’ is on view at James Harris Gallery in Seattle through April 1. For more information, call (206) 903-6220 or visit www.JamesHarrisGallery.com.