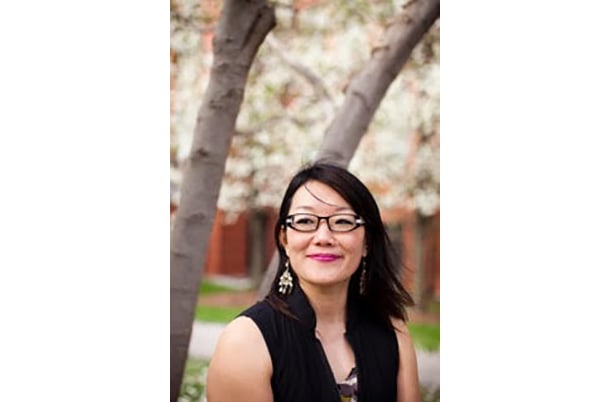 Generally speaking, poetry reviews and fiction reviews keep to different sides of the room. After all, a novella is a different form than a sonnet, with different limitations, rhythms, and expectations tied closely to word limits and structures. It’s easiest to compare apples to apples, rather than apples to peaches.

But Anna Maria Hong’s Age of Glass, a poetry collection of sonnets (both traditional and mutated), and her novella H & G (a postmodern prose collage based on Hansel and Gretel) go deep into the modernized fairytale in ways that make the two books seem more related than separate.

Of these two projects published in 2018, she says:

“I started drafting the poems in Age of Glass in the mid-aughts and ended up working on that collection for 14 years. The initial idea was to draft 100 sonnets, although I found that I liked writing them and interrogating and stretching the form so much that I just kept going, drafting well over 300 sonnets over about seven years, and then revised and shaped those into a collection. One of the main strands in Age of Glass are the fairy tale- and myth-inspired poems, most of which are dramatic monologues from the points of view of female characters whom I wanted to imbue with more agency and idiosyncrasy than they inhabit in the old tales. I was aware of working in a feminist tradition of reworking received stories to spin new meanings and found that approach very satisfying—a way to reclaim personal voice as well.

In the sonnets comprising Age of Glass, Hong can take poetic compression and beautiful play with language to surprise and delight the reader:

Every age an age of glass. A slipper shoes
the foot, takes giant steps of tock and tick,
a cone blown, known gone, glass is fashioned, metal
spun to color, mineral made light,
and this is the last poem I will write
Glass is sand is time falling loose
A gap of glass is wrapping, a bottle
( ) or swan ( ) of the human whose
hand will flip the glass, grabbing it
by the neck. Every time a nick.
And it is our glass to raise and smash.
A female silhouette, a shape, a vase
With two closed ends, one met. Two cones have kissed.
And the skin of our limit is glass.

Movement through Age of Glass is fast but covers a lot of literary ground. Poems in the collection span mineral-named ages, to then encompass Greek myths, to explore then icons of enchantment like tonics, boxes of many colors, to Little Red Riding Hood’s hood, to qualities passed down only through the mother (hologynic), to the riddle of the Sphinx. Not all pieces are strict sonnets, but they all apply the same condensation rigor to the line and require similar attention to the musicality of the phrasing and end words.

Hong writes of the novella H & G that it “was a much faster project, and I embarked on it after having retold the tale in at least one poem featuring the twins, as I think of them. The Grimms’ version of Hansel and Gretel always fascinated and bothered me, as it resonates with many of the themes that animate my writing in general: hunger and greed, bad decisions with terrible consequences for others, abandonment, unequal treatment based on gender, and triumphing through trauma. The tale also features a female protagonist, as it’s Gretel or G. who takes decisive action to dispense with the Witch and save herself and her brother, and I wanted to explore the different choices that each character makes in the face of trauma and its aftermath. I’d always thought it improbable that they would just return to their father’s cottage after all that, and I also wanted to create a middle and an ending that arrive somewhere other than the original domicile.”

Here, in the opening lines of the “Sticky Stuff” section that opens the book, Hong warns us that candy is not merely candy and that she will be delving into the worst aspects of this fairytale.

“The candy gets on the inside because we eat it and eat it like thieves, like children under a great burr of clouds made by a god in a slothful mood.

The candy gets on the outside and sticks like tragedy, marking us as the worst type of person. It sticks at the worst time.

What was the worst time? We can’t remember it, but we can feel it like a smear of embers inside our small chests…”

In the rest of the novella, Hong pulls no punches describing the emotions around parental abandonment, untrustworthy adults, different ways of getting lost. How Gretel, the clever one of the duo and the only one who sees the witch for who she is, copes with the aftermath: therapy, imagined different outcomes, confronting the father and evil stepmothers, confronting race, gender and class bigotries that emerge as their story is re-interpreted by people who were never there to save them.

We see how the witch fell in love with H (but also wants to consume him). We see how the Witch makes Gretel feed H, continuing his passiveness and apathy toward real danger. We see many variations on the escape from the house as the site of trauma, relived in memory and dreams. And the rescuer, the Huntsman (called Ranger P. Charming in one section) – is he sinister or a cardboard cutout of a friendly figure? What happens to children who grow up, never able to relax their vigilance?

And what of Hong’s next project, Fablesque, which focuses on animal tales and fables rather than humans and will come out from Tupelo Press in 2020.

Of the upcoming book, Hong says, it is “more directly autobiographical than my previous work, as I relate some familial stories, which intersect with the partitioning of the Korean peninsula into North and South, as that event and World War II and the Korean War dramatically impacted both of my parents’ lives and those of their families, as well as everyone living in Korea during the mid-20th century.

“I think of these familial stories as akin to the fairy tale and myth in their intensity and their outsized effect on young minds and hearts, although of course, these tales are true and informed by large historical forces. One of the questions that I continue to explore is how one can re-shape received tales of all kinds to give more agency to the listener/reader/writer, so that rather than being caught up in someone else’s narrative, she has the power to harness those tales to shape her own destiny.”