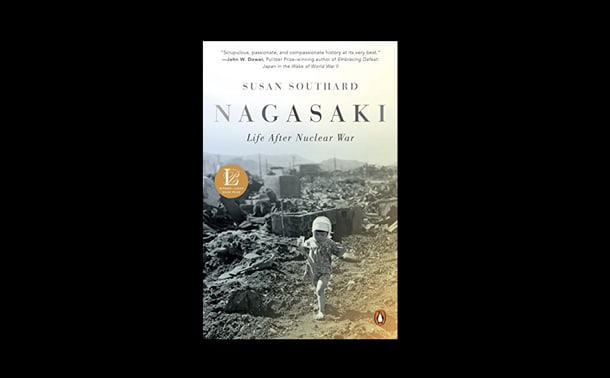 In an election year when United States presidential candidates discuss “access to the nuclear codes,” it’s crucial to fight against historical amnesia and to remember the human cost of nuclear war. Anyone needing an education in that cost (or a reminder) should read Susan Southard’s remarkable book Nagasaki: Life After Nuclear War.

The book’s publication coincides with the 70th anniversary of the atomic bombings in Hiroshima and Nagasaki. Because Hiroshima was the first Japanese city to experience a nuclear attack, Americans might know its story in more detail. But, as Southard writes, “[the] invisibility of Nagasaki is so extreme that ‘the bomb’ is often expressed as a singular event for both cities.” Southard’s account provides a detailed and well-documented corrective to that invisibility, giving a portrait of the city before and after the war, as well as following the lives of five hibakusha (people affected by the atomic bomb) for decades.

As might be expected, Nagasaki is not reading for the faint of heart; the graphic details of people’s injuries and death scenes, particularly in the first four chapters, can be excruciating. “The entire city convulsed,” writes Southard, at the beginning of the chapter describing the bombing. Despite media blackouts and societal stigma, however, a few hibakusha lived to tell their stories and speak against the use of nuclear weapons. How they recovered, and how they decided to live for many decades after, is just one of the many compelling reasons to read Southard’s book.

With training in journalism and creative nonfiction, Southard is also founder of the Essential Theatre company in Arizona. I spoke with her over e-mail about the making and shaping of Nagasaki: Life After Nuclear War.

Tamiko Nimura: The prologue of Nagasaki briefly covers your connection to the subject. Can you talk a bit more about the deeper connections that led you to write this book? You lived in Japan for some time, and served as substitute interpreter for one of your subjects, Taniguchi-san. I’m curious to know more about how you decided to take on the daunting task of a narrative nonfiction book—rather than, say, a play, given your background in theater.

Susan Southard: I think there were many deep connections that converged when I began working on this book. Although our minds don’t work in a linear way, I’ll try to explain these connections somewhat chronologically. The first was my visit to Nagasaki when I was 16, living in Japan for a year-long study abroad program. I joined my high school senior class for a week-long field trip to Japan’s southernmost island of Kyushu, where Nagasaki is located. Standing side-by-side with my Japanese schoolmates inside the Nagasaki Atomic Bomb Museum, my friends and I stared into the glass cases of devastating photographs and melted artifacts from the bombing. I knew very little about the Pacific War and felt overwhelmed by the impact of the bomb on hundreds of thousands of people and the fact that my country had used this horrific weapon on the people of a country I loved. Although it wasn’t conscious at the time, I think this memory was in some way formative in my sense that as Americans we need to understand and reexamine the effects of our some of our military actions on others.

As you mentioned, many years later I served as a substitute interpreter for Mr. Taniguchi, a Nagasaki survivor, for two days when he was on a speaking tour in the United States. He was 16 at the time of the bombing, and his entire back was instantaneously burned off. I was spellbound by Taniguchi’s story of survival and his choice to speak across the world on behalf of those who died beneath the mushroom cloud and in the months and years that followed from their injuries and radiation exposure. The next year (1987), I visited Mr. Taniguchi in Nagasaki and met other hibakusha as well. Their stories stayed with me, and as the years passed and they aged, I kept thinking about them and wondering what it would be like to come to the final years of one’s life and look back on the experience—and survival—of nuclear war. This was the pressing question that led to my initiating research for the book.

As for why I chose narrative nonfiction as the means to tell Taniguchi’s and others’ stories, my work in theatre is focused around our audiences’ personal stories. Essential Theatre, the company I founded 26 years ago, performs an international art form called Playback Theatre, in which members of the audience tell stories from their lives, and then watch as our company of actors and musicians bring the stories to artistic life using music, movement, metaphor, and scenes. It’s improvised, interactive performance designed to honor people’s individual experiences, reflect the diversity of human experiences, and celebrate our common humanity. So I’m trained in listening to people’s stories and creating narrative structures to bring them to life. That, and because history and research-based nonfiction is my favorite to read, narrative storytelling seem like the natural choice for Nagasaki.

That said, I can tell you that when I went to Nagasaki in 2003 to do my first hibakusha interviews for the book, I had no clue how daunting a project the book would ultimately become!

TN: Can you describe the process of writing the book?—it interweaves so much of the big-picture historical context with the personal accounts of the hibakusha. How did you research and synthesize so much material? What was the biggest challenge in writing the book?

SS: Writing the book was a complex and arduous process—though very exciting as well. In addition to interviewing, translating, and finding the best way to tell the individual stories of the five survivors whose stories are featured in the book, I spent years studying the history of the city, the Pacific War, the medical effects of radiation on the body, post-war Japan, and the hibakushas’ long journey of post-nuclear survival. I hired an amazing researcher, Robin LaVoie, who supported the project with commitment and skill. Synthesizing the larger historical stories with the survivors’ personal experiences was incredibly challenging and took a lot of time and thought.

The biggest challenge was structure—finding the structure for the book, for each chapter, for each section of each chapter, and often for individual paragraphs—that could integrate both the intimate and larger aspects of a 70-year story. When I found the right structure for whatever I was working on (often after countless efforts that failed), the narrative felt like it had its own life, which was thrilling. Finally, after 12 years, the manuscript was completed. It was a profound experience, in large part because of the survivors themselves and the profound pleasure in knowing them.

TN: So much of the material in the book is haunting and horrific, particularly the first few chapters about the bombing and its immediate aftermath. How were you able to process the details of these accounts yourself, as a writer, as a human being?  (I am thinking about Dr. Akizuki, who you describe as someone who becomes emotionally and mentally “depleted” from his work with hibakusha, but comes to believe in the power of story as redemption.)

SS: Yes, yes. I read hundreds of survivors’ stories to try to understand, in some small way, what it was like that morning in August 1945 and in the years to come. Their stories are harrowing and so hard to take in. There were two things that kept me going: First, the survivors themselves. Except for Mr. Taniguchi whom I had met when he was 57, I met the hibakusha in my book when they were in their 70s and 80s. Their unique personalities, experiences, and perspectives were captivating to me. I wanted to understand as fully as possible what they had gone through, and ultimately I wanted readers to know them as I did. This helped me get through the ghastly realities of their stories.

Second, early on after I’d started my interviews and research, I discovered that there was no book that told the full story of the long-term aftermath of nuclear war. The urgency to tell this very important story kept me going when the content I was writing about was overwhelming.

TN: Is there anything left out of the book that you wish you had been able to include?

SS: There was a great deal I had to cut, for length and to strengthen the narrative, which was definitely hard at times. And a book, with its inherent limitations, can’t begin to capture all the stories, over many years, of the hundreds of thousands who survived. Ultimately, though, I think—and hope—that the book fulfills my goal to tell the story of the Nagasaki bombing and its aftermath through the eyes of five young men and women who had survived.

TN: I borrow this question from my writer friend, Tara Austen Weaver—what is one question that you wish people would ask you about the book?

SS: It’s a great question, one that no one has ever asked me! I would love to talk with people more about the moral and ethical implications of our decision to use the bombs—not only on hibakusha, their children, and generations beyond, but on what we as a country consider ethical during wartime. How has our decision to use of the bombs and our justifications for doing so impacted how we define ourselves as Americans in the 21st century? A very hard and very important, question, I think.

On the evening of August 6, Seattle will commemorate the atomic bombings of Hiroshima and Nagasaki in its annual Green Lake event  “From Hiroshima to Hope: A Floating Lantern Ceremony.” For more details, see the website http://fromhiroshimatohope.org.