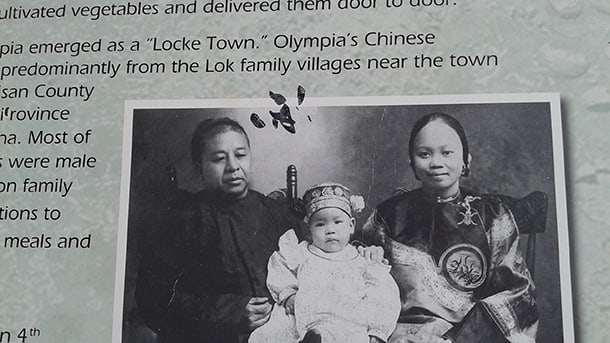 Since 2004, a historical marker recognizing the Chinese community of Olympia has stood in the city’s Heritage Park. In the past few years the marker has been vandalized, including by a rock. Most recently, someone used a Sharpie marker to scribble fake “Chinese” characters over a Chinese poem written in calligraphy on the marker.

The defacement has now been cleaned up, thanks to Ron Locke, a member of the Olympia Chinatown Historical Project Committee.

Ron’s cousin Brian Lock wrote in an email: “We know most of the community is very respectful of the Chinese Marker and take time to read it when they visit the Heritage Fountain in downtown Olympia. There will always be some who want to vandalize historical signage.”

According to Lock, the marker is still slightly chipped after being vandalized about five years ago.

Olympia is rich in Chinese American history. Lock noted that it was one of the only places in Washington state where an anti-Chinese riot was prevented.